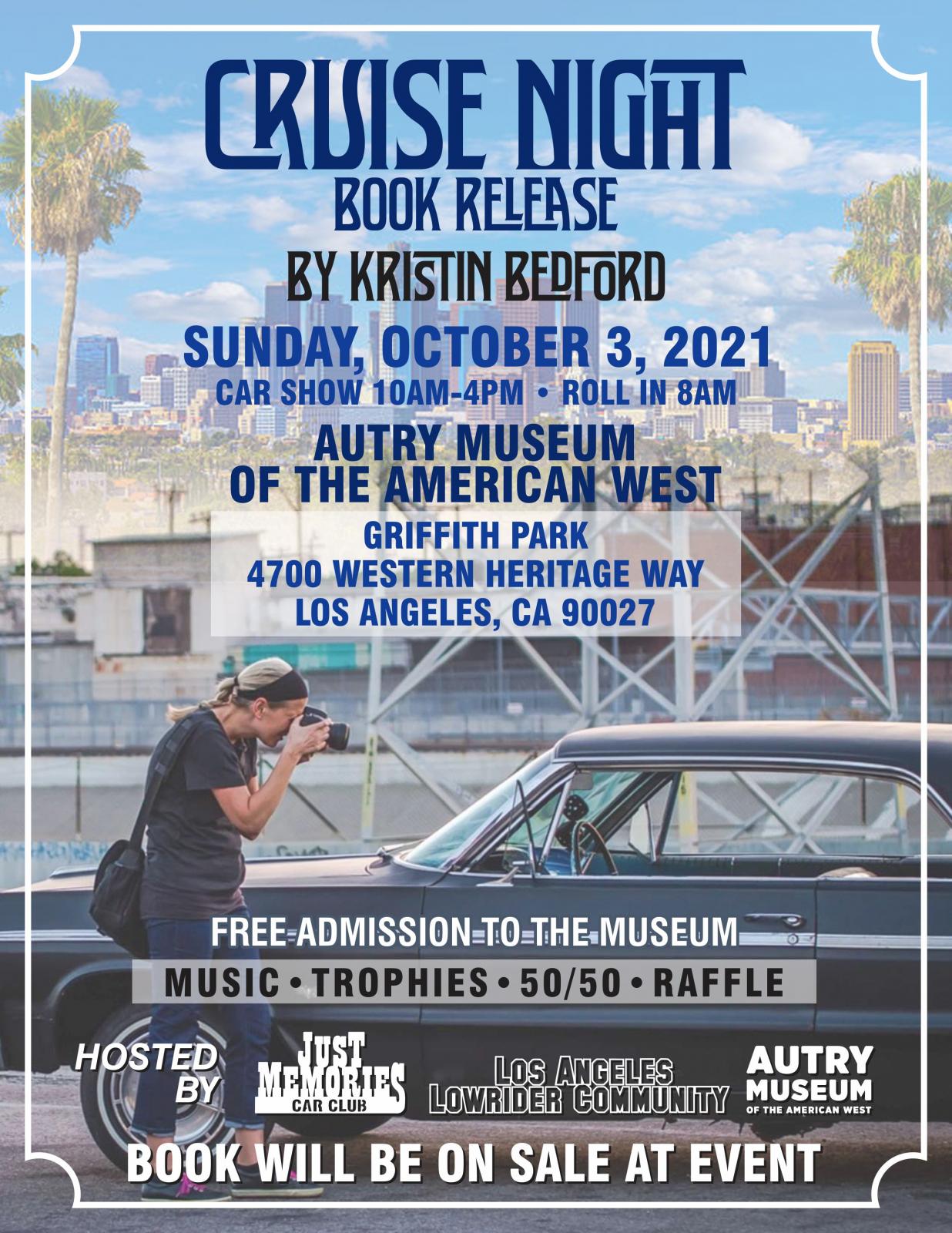 Skylight Books is delighted to be the bookseller at this lowrider car show and walk-up signing in celebration of Kristin Bedford's book of photographs CRUISE NIGHT!

Known for her quiet portraits of American cultural movements, Kristin Bedford’s new work, Cruise Night, is an intimate and unstaged exploration of Mexican American lowrider car culture in Los Angeles. From 2014 to 2019 she attended hundreds of lowrider cruise nights, car shows, quinceañeras, weddings and funerals. Bedford’s images offer a new visual narrative around the lowrider tradition and invite us to question prevalent societal stereotypes. Located at the intersection of aesthetics and social realism, her photographs explore the nuance of cars as mobile canvases and the legendary community that creates them. With the bold language of color photography and the female vantage point, Cruise Night is an original look at a prolific American movement set against the Los Angeles cityscape.

Located at the intersection of aesthetics and social realism, Kristin Bedford’s photography explores race, visual stereotypes and communal self-expression. Through long-term engagement with communities, Bedford makes photographs that invite us to reconsider prevalent visual narratives around cultural and spiritual movements. Bedford’s photographs have appeared in solo and group exhibitions throughout the United States and Europe and are held in numerous private and public collections worldwide, including the Library of Congress and the Archive of Documentary Arts at the Rubenstein Library. Bedford has given talks internationally about her projects, including presentations at Pop-Up Magazine and on numerous National Public Radio broadcasts. Her work has been featured in such publications as The New York Times, Esquire and The Huffington Post. Bedford holds a B.A. from George Washington University, an A.A. from The Fashion Institute of Technology and an M.F.A. from Duke University. Born in Washington, D.C., she lives and works in Los Angeles.

“Kristin Bedford appreciates the sensitivity of our culture and Cruise Night is an amazing representation of lowriding. We are always being stereotyped but by riding with us she understands what we are really about and what we do. She has earned the respect of the lowrider community by not just making a book but by living the life with us. We will always be thankful that she’s one of the very few that got it right. Like the saying goes, “one rides, we all ride” and she’s riding along with us.” - Juan Ramirez, Co-founder Los Angeles Lowrider Community and President of Just Memories Car Club

“As a woman, Kristin Bedford brings a unique perspective to her documentation of the male-dominated culture of lowriding in Southern California. Precisely framed and lit, her images capture the jewel-like hues and meticulous customization of the cars, celebrating the creative vision of each owner. She also focuses her lens on the women and family members, revealing the palpable sense of community that underlies this Mexican American tradition. Cruise Night introduces a wider audience not only to that tradition and some of its members through excerpts from oral histories that Bedford conducted, but also to a quietly compelling new voice in documentary photography.”  - Virginia Heckert, Curator of Photographs, J. Paul Getty Museum

“Each of these exquisite photos is a visual poem of color, form and harmony. As a group, they at once give intimate access to, and a sense of the mystery, in a world you could never otherwise have known, and will now never be able to forget. There is twofold art here: the lowriders’—with their cars, bodies, and relation to the city streets and spaces—and Kristin Bedford’s, with her photographs. Cruise Night is a superb work of photography and ethnography. It is about love of life and the joy in seeing.” - Bruce Jackson, SUNY Distinguished Professor and James Agee Professor of American Culture, SUNY Buffalo

“I have been lowriding for over 50 years. I have never met a photographer as sincere as Kristin Bedford. She gets a lot of respect from car clubs and lowriders all over, and that means a lot in our Chicano culture. I don’t think anybody has given us the credit and taken the time to understand our history like she has. We are not going to talk to just anybody but we knew we could trust her and she would listen. With her book, she is doing something good for the lowrider community. I am the old school, I’ve been around and I know the real thing when I see it. Kristin Bedford is the real thing.” - Oscar Ruelas, “The Godfather of Lowriding”, Co-founder Duke's Car Club