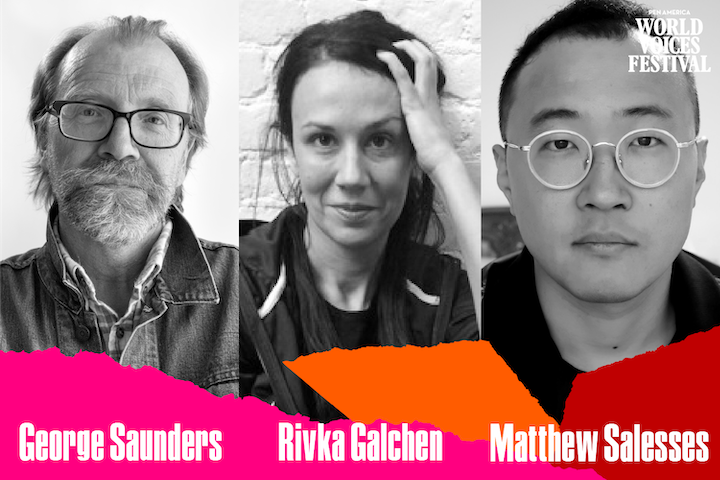 The Master’s Tools: On the Art of Writing with George Saunders and Matthew Salesses, moderated by Rivka Galchen.

Register HERE! Use code SKYLT21WVF for 50% off!

What exactly is the “craft” of writing, and how do we teach it? Part conversation, part workshop, George Saunders and Matthew Salesses call into question the politics of teaching people how to tell stories in an informal, spontaneous, curiosity-driven conversation about the art of writing. In A Swim in a Pond in the Rain, Saunders explains how and why the quirks we so often perceive as flaws are actually the reasons a story succeeds. Salesses’s Craft in the Real World poses a vital critique to the tradition of the writing workshop as a space where certain modes of storytelling are routinely normalized and valued above others. Put your own pen to paper with their favorite exercises in a mini workshop before learning the theories behind their new books, the cultural expectations behind the word “craft,” and the need to reimagine conventional models for teaching writing.

Put your own pen to paper with their favorite exercises in an informal, curiosity-driven mini workshop leading into a discussion of the theories behind Salesses’s and Saunders’s new books, the cultural expectations behind the word “craft,” and the need to reimagine conventional models for teaching writing. Moderated by award-winning writer and journalist Rivka Galchen, whose newest novel, Everyone Knows Your Mother is a Witch, comes out this June.

George Saunders is the author of nine books, including the novel Lincoln in the Bardo, which won the Man Booker Prize, and the story collections Pastoralia and Tenth of December, which was a finalist for the National Book Award. He has received fellowships from the Lannan Foundation, the American Academy of Arts and Letters, and the Guggenheim Foundation. In 2006 he was awarded a MacArthur Fellowship. In 2013 he was awarded the PEN/Malamud Award for Excellence in Short Fiction and was included in Time’s list of the one hundred most influential people in the world. He teaches in the creative writing program at Syracuse University.

Matthew Salesses is the author of three novels, Disappear Doppelgänger Disappear, The Hundred-Year Flood, and I’m Not Saying, I’m Just Saying, and a forthcoming essay collection. He was adopted from Korea and currently lives in Iowa.

Rivka Galchen, a fiction writer and essayist, is a recipient of a William Saroyan International Prize for Writing and has been a finalist for the Atwood Gibson Writers’ Trust Fiction Prize and the Governor General’s Award for English-language fiction, among other distinctions. She writes regularly for The New Yorker, whose editors selected her for their list of “20 Under 40” American fiction writers in 2010. She has received an M.D. from the Icahn School of Medicine at Mount Sinai. Born in Toronto and raised in Norman, OK, Galchen now splits her time between Montreal and New York City.

A Swim in a Pond in the Rain: In Which Four Russians Give a Master Class on Writing, Reading, and Life (Hardcover)