/////POSTPONED////////: LIVE ON CROWDCAST: NOBUKO MIYAMOTO discusses NOT YO' BUTTERFLY 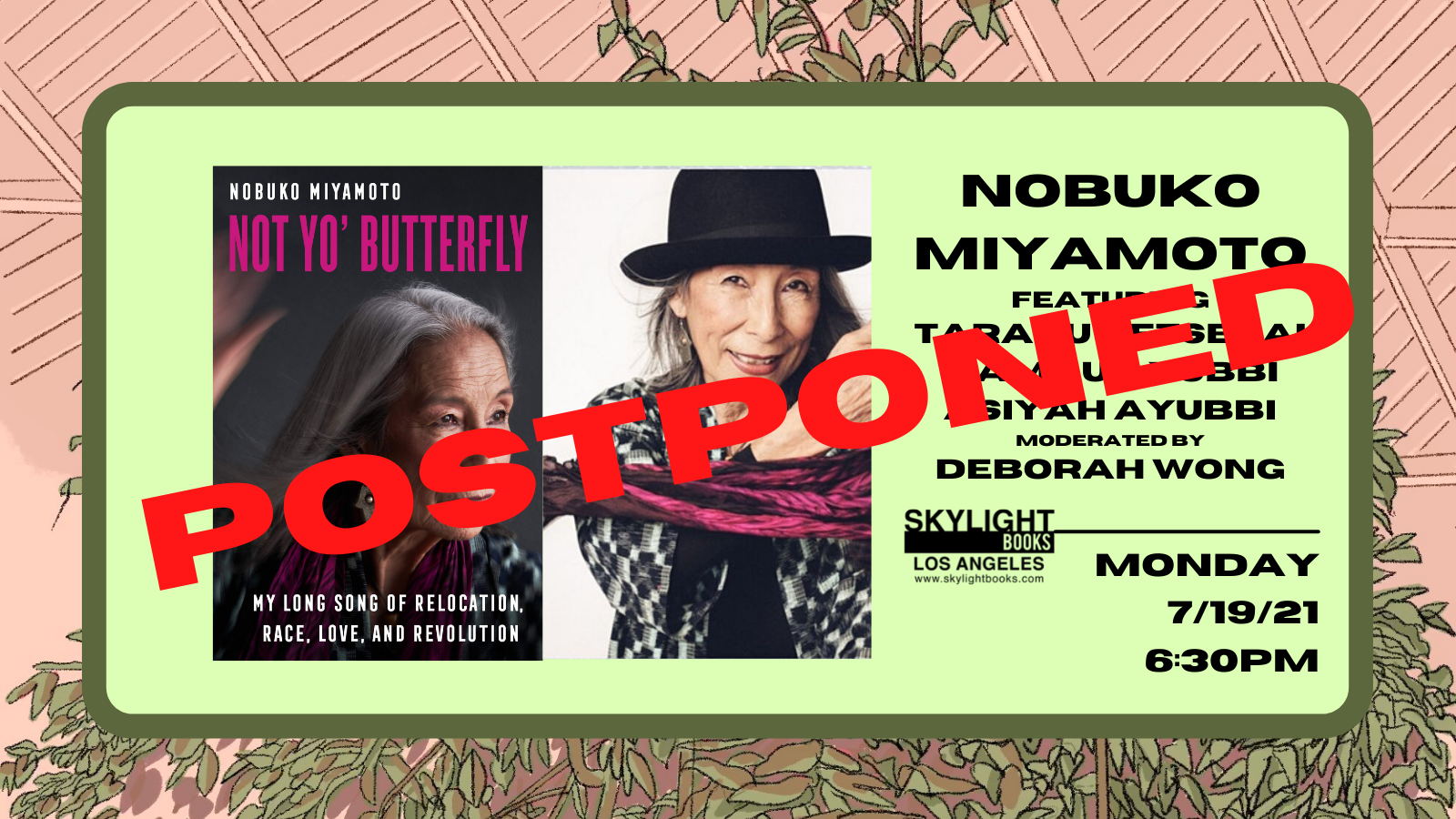 Not Yo' Butterfly: My Long Song of Relocation, Race, Love, and Revolution (University of California Press)

Not Yo’ Butterfly is the intimate and unflinching life story of Nobuko Miyamoto—artist, activist, and mother. Beginning with the harrowing early years of her life as a Japanese American child navigating a fearful west coast during World War II, Miyamoto leads readers into the landscapes that defined the experiences of twentieth-century America and also foregrounds the struggles of people of color who reclaimed their histories, identities, and power through activism and art.

Miyamoto vividly describes her early life in the racialized atmosphere of Hollywood musicals and then her turn toward activism as an Asian American troubadour with the release of A Grain of Sand—considered to be the first Asian American folk album. Her narrative intersects with the stories of Yuri Kochiyama and Grace Lee Boggs, influential in both Asian and Black liberation movements. She tells how her experience of motherhood with an Afro-Asian son, as well as a marriage that intertwined Black and Japanese families and communities, placed her at the nexus of the 1992 Rodney King riots—and how she used art to create interracial solidarity and conciliation.

Through it all, Miyamoto has embraced her identity as an Asian American woman to create an antiracist body of work and a blueprint for empathy and praxis through community art. Her sometimes barbed, often provocative, and always steadfast story is now told.

Nobuko Miyamoto is a third-generation Japanese American songwriter, dance and theater artist, and activist, and is the Artistic Director of Great Leap. Her work has explored ways to reclaim and decolonize our minds, bodies, histories, and communities, using the arts to create social change and solidarity across cultural borders. Two of Nobuko’s albums are part of the Smithsonian Folkways catalog: A Grain of Sand, with Chris Iijima and Charlie Chin, produced by Paredon Records in 1973, and 120,000 Stories, released by Smithsonian Folkways in 2021.

Tarabu Betserai Kirkland is the Director/Producer of “One Hundred Years From Mississippi” a documentary film and winner of the Best Documentary award at the Harlem International Film Festival in New York City and the National Black Film Festival in Houston. Tarabu’s background as a Media Artist, Producer and Administrator includes twenty years in Public Radio having served as General Manager of radio station KPFK-FM in Los Angeles, Assistant Manager of KPFA in Berkeley where he co-founded the Third World Media Department and helped establish national radio training programs for producers of color, and General Manager of the Community Information Network, a national news and public affairs radio outlet.  He is also the author and composer of the musical “Jukebox” which starred Danny Glover, author and producer of the stage play “Ritual of a Bop Solo,” producer of the stage play “Jungle Bells,” and producer and musical co-director for the National Public Radio drama “Quiet Thunder,” and the writer and producer for numerous radio documentary projects and video industrials. In addition, Tarabu has worked in the cultural and social service sector as the Director of Programs at A Place Called Home, Managing Director of Great Leap, Inc., and Managing Director of the Black Theatre Artists Workshop.

Asiyah Ayubbi is a Japanese-African American Muslim musician and graphic designer currently based in the Midwest. A founding member of the Az-Zahra Ensemble, a Muslim women's qasida and nasheed group.

Imam Kamau Ayubbi grew up in Los Angeles California. He received his Bachelor’s Degree in 1998 from San Francisco State University in Visual Art. During undergrad, Kamau also enjoyed an internship with Holistic Health studies. He received his religious and spiritual education and training under the Islamic Supreme Council of America (ISCA) and was appointed as an Imam in 2002. Imam Ayubbi received his Clinical Pastoral Education (chaplaincy training) at Beaumont CPE Center in Royal Oak, MI. Before serving at University of Michigan Hospital and Health Systems, Imam Ayubbi worked as a staff chaplain in Adult Palliative Care and in a Cardiac Progressive Care Unit at Beaumont Royal Oak from 2010-2015. He loves sharing principles and practices of Peace and Meditation for all ages.

Deborah Wong is Professor of Ethnomusicology at the University of California, Riverside. She is the author of Sounding the Center: History and Aesthetics in Thai Buddhist Performance, Speak it Louder: Asian Americans Making Music, and Louder and Faster: Pain, Joy, and the Body Politic in Asian American Taiko.

Not Yo' Butterfly: My Long Song of Relocation, Race, Love, and Revolution (American Crossroads #60) (Paperback)