POSTPONED // AT SKYLIGHT: VAUHINI VARA in conversation with JUSTIN TORRES 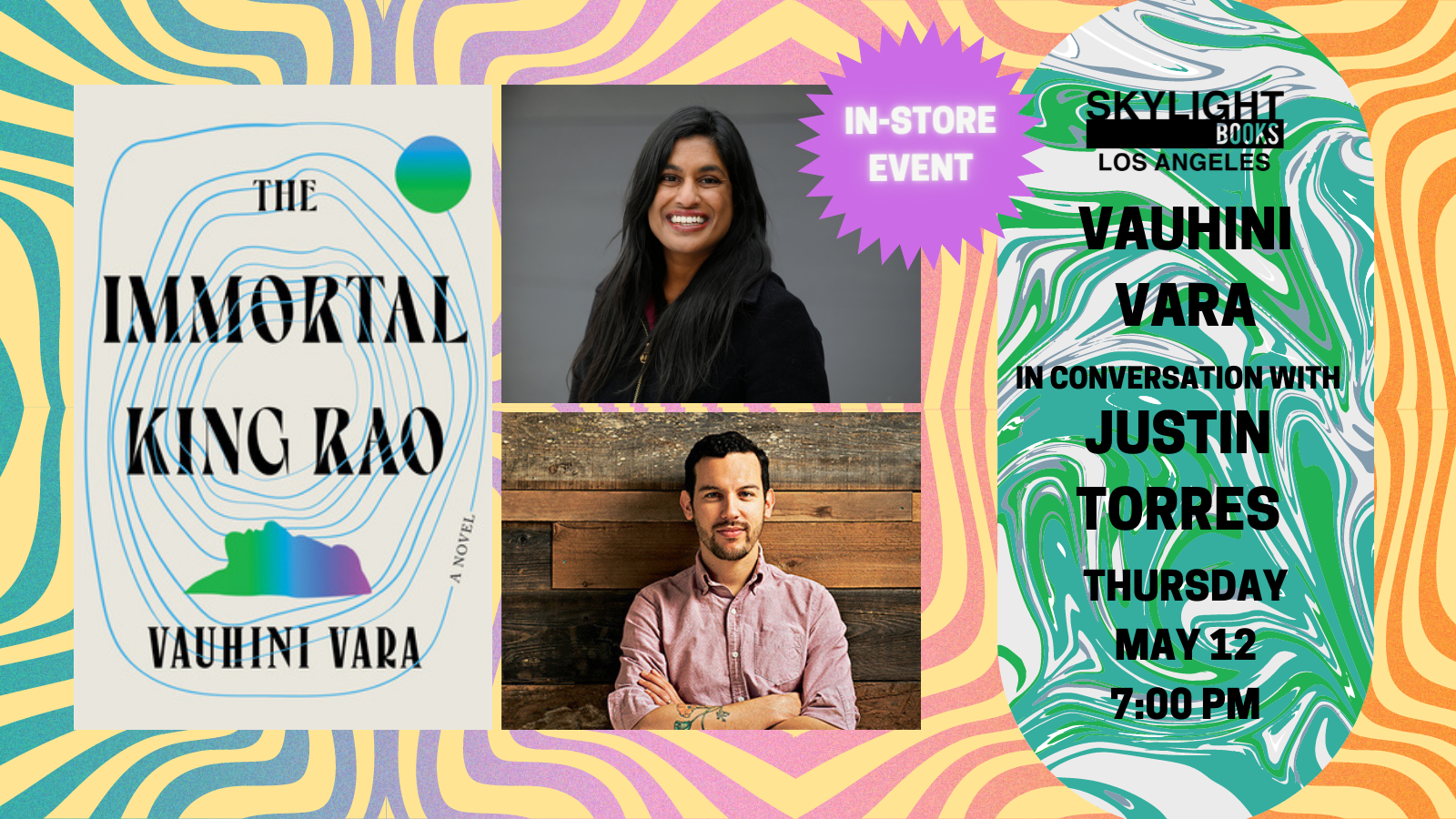 THIS EVENT HAS BEEN POSTPONED. StAY TUNED FOR A NEW DATE IN THE NEAR FUTURE.

In an Indian village in the 1950s, a precocious child is born into a family of Dalit coconut farmers. King Rao will grow up to be the most accomplished tech CEO in the world and, eventually, the leader of a global, corporate-led government.

In a future in which the world is run by the Board of Corporations, King’s daughter, Athena, reckons with his legacy—literally, for he has given her access to his memories, among other questionable gifts.

With climate change raging, Athena has come to believe that saving the planet and its Shareholders will require a radical act of communion—and so she sets out to tell the truth to the world’s Shareholders, in entrancing sensory detail, about King’s childhood on a South Indian coconut plantation; his migration to the U.S. to study engineering in a world transformed by globalization; his marriage to the ambitious artist with whom he changed the world; and, ultimately, his invention, under self-exile, of the most ambitious creation of his life—Athena herself.

The Immortal King Rao, written by a former Wall Street Journal technology reporter, is a resonant debut novel obliterating the boundaries between literary and speculative fiction, the historic and the dystopian, confronting how we arrived at the age of technological capitalism and where our actions might take us next.

Vauhini Vara is the author of The Immortal King Rao, an American Booksellers Association Indies Introduce selection, named one of the most anticipated books of 2022 by New York, Ms., Lithub, Goodreads, and others. Her fiction has been honored by the Rona Jaffe Foundation, the O. Henry Prize, the Canada Council for the Arts, and others. She is also a journalist and has written and edited for the New York Times Magazine, the New Yorker, and the Atlantic.

Justin Torres' novel We the Animals has been translated into fifteen languages and was recently adapted into a film. He has published short fiction in The New Yorker, Harper's, and Granta, as well as non-fiction pieces in publications like The Guardian and The Advocate. A graduate of the Iowa Writers' Workshop, Justin was a Wallace Stegner Fellow at Stanford University, a fellow at the Radcliffe Institute for Advanced Study at Harvard, and a Cullman Center Fellow at the New York Public Library. He was the recipient of a grant from the National Endowment of the Arts, a Rolón Fellowship in Literature from United States Artists, and the VCU Cabell First Novelist Award.

Praise for The Immortal King Rao -

Utterly, thrillingly brilliant. From the first unforgettable page to the last, The Immortal King Rao is a form-inventing, genre-exploding triumph. Vauhini Vara’s bravura debut has reshaped my brain and expanded my heart. — R.O. Kwon, author of The Incendiaries

In this richly imagined saga spanning past, present, and future, Vauhini Vara brings us a visionary who makes the world in his image, and the strong-willed daughter whose life could be his final legacy. Vara’s brilliance is matched only by her heart, and this unforgettable debut will challenge what you think you know about genius, capitalism, consciousness, and what it means to be human. — Anna North, author of Outlawed

Vara comes out the gate with a masterwork: a book that is three great novels in one–the tale of a thriving and chaotic Dalit clan in the first decades of independent India; an immigrant success story in ’80s America; and a dystopian nightmare of the post-Trump future. — Karan Mahajan, author of The Association of Small Bombs

The Immortal King Rao is an odyssey of the grandest scale, spanning over a century and charting a Dalit immigrant's rise to world power. Vauhini Vara fuses intricate family lore with the history of tech solutionism and capitalist demagoguery, pointing forward to a dangerously likely future of corporate dominion; she writes with the meticulous clarity of a longform journalist, the explosive force of a Trident missile, and the ambition of her own brilliant protagonists. — Tony Tulathimutte, author of Private Citizens

An exacting writer of the digital age, journalist Vara makes her debut with a trippy novel that marries the family saga with a biotech satire. … Vara has a gift for humanizing the invisible labor that happens behind our screens. Who, if anyone, can really separate themselves from the digital ties that bind us? — Jessica Jacolbe - Vulture

A brilliant and beautifully written book about capitalism and the patriarchy, about Dalit India and digital America, about power and family and love. — Alex Preston - The Observer

Alternating between Rao’s childhood in a small Indian village, his early student days in the US, and the dystopian society in which Athena has to function, Vara’s original debut delivers challenging and weighty themes with a sure hand. — Poornima Apte - Booklist (starred review)

An astonishing debut. An amazing imagination. Vara's voice is thrilling, original, dynamic and ever-surprising as her characters move from world to world, from the real to the fantastic, examining the myriad contradictory shapes in which love can appear. — Chitra Banerjee Divakaruni, author of The Last Queen