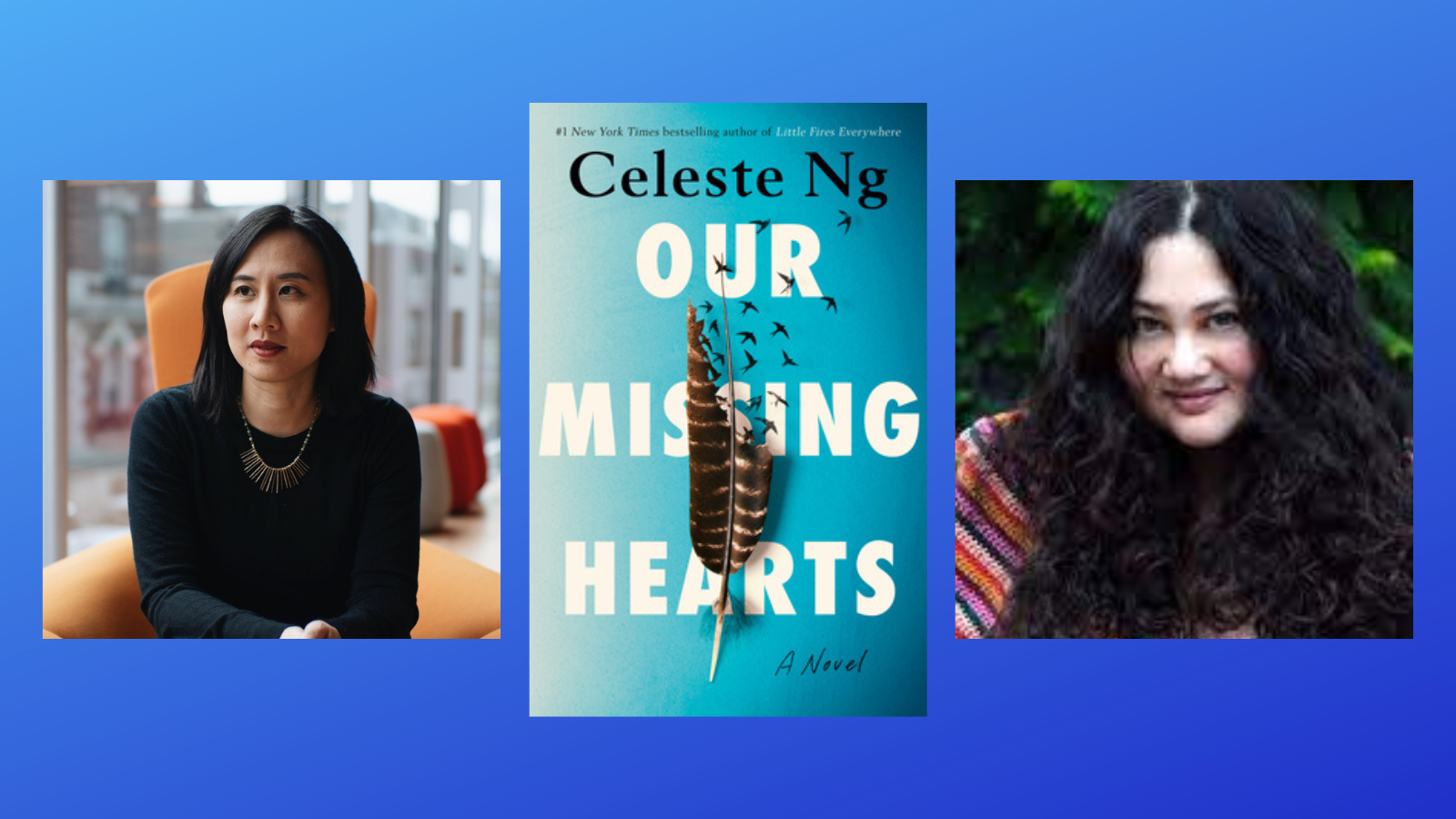 Number one bestselling author and Guggenheim fellow Celeste Ng joins PEN Out Loud to discuss her third novel, OUR MISSING HEARTS. A suspenseful and heartrending novel about the unbreakable love between a mother and child, OUR MISSING HEARTS is an old story made new, of the ways supposedly civilized communities can pretend to ignore the most searing injustice. Ng will be in conversation with Gabrielle Zevin.

This in-person event will start at 7pm PDT and conclude with a book signing. Titles by both Celeste and Gabrielle will be available for sale following the program.

Masks will be required and vaccination passes will be checked at the door.

ASL interpretation will be provided by ProBono ASL.

From the number one bestselling author of Little Fires Everywhere, a deeply suspenseful and heartrending novel about the unbreakable love between a mother and child in a society consumed by fear

Twelve-year-old Bird Gardner lives a quiet existence with his loving but broken father, a former linguist who now shelves books in a university library. Bird knows to not ask too many questions, stand out too much, or stray too far. For a decade, their lives have been governed by laws written to preserve “American culture” in the wake of years of economic instability and violence. To keep the peace and restore prosperity, the authorities are now allowed to relocate children of dissidents, especially those of Asian origin, and libraries have been forced to remove books seen as unpatriotic—including the work of Bird’s mother, Margaret, a Chinese American poet who left the family when he was nine years old.

Bird has grown up disavowing his mother and her poems; he doesn’t know her work or what happened to her, and he knows he shouldn’t wonder. But when he receives a mysterious letter containing only a cryptic drawing, he is pulled into a quest to find her. His journey will take him back to the many folktales she poured into his head as a child, through the ranks of an underground network of librarians, into the lives of the children who have been taken, and finally to New York City, where a new act of defiance may be the beginning of much-needed change.

Our Missing Hearts is an old story made new, of the ways supposedly civilized communities can ignore the most searing injustice. It’s a story about the power—and limitations—of art to create change, the lessons and legacies we pass on to our children, and how any of us can survive a broken world with our hearts intact.

Celeste Ng is the number one New York Times bestselling author of Everything I Never Told You and Little Fires Everywhere. Her third novel, Our Missing Hearts, will be published in October 2022. Ng is the recipient of fellowships from the National Endowment for the Arts and the Guggenheim Foundation, and her work has been published in over thirty languages.

Gabrielle Zevin is the New York Times and internationally best-selling author of several critically acclaimed novels, including The Storied Life of A.J. Fikry, which won the Southern California Independent Booksellers Award and the Japan Booksellers’ Award among other honors, and Young Jane Young, which won the South­ern Book Prize. Her novels have been translated into thirty-nine languages. She has also written books for young readers, including the award-winning Elsewhere. She lives in Los Angeles.

Praise for Our Missing Hearts -

“Known for focusing on families, race, and relationships, Ng raises the bar another notch in a story intensified by reference to such police violence, political protest, book banning, and discrimination against people of color. Ng’s beautiful yet chilling tale will resonate with readers who enjoyed Margaret Atwood’s The Handmaid’s Tale and Jessamine Chan’s more recent School for Good Mothers. As with her previous novels, her storytelling will not disappoint.” —Library Journal (starred review)

“Sensitive, nuanced, and vividly drawn . . . Thoroughly engrossing and deeply moving . . . Taut and terrifying, Ng’s cautionary tale transports us into an American tomorrow that is all too easy to imagine.” —Kirkus (starred review)

“Remarkable . . . Ng crafts an affecting family drama out of the chilling and charged atmosphere, and shines especially when offering testimony to the power of art and storytelling . . . Ng’s latest crackles and sizzles all the way to the end.” —Publishers Weekly (starred review)

“[So] much of this utterly stupendous tale is hauntingly, horrifically, historically, currently all too real, from removing and caging children to anti-Asian hate crimes, violent protests, police brutality, and despotic (so-called) leadership. Yet Ng creates an exquisite story of unbreakable family bonds, lifesaving storytelling (and seemingly omniscient librarians!), brilliantly subversive art, and accidentally transformative activism. As lyrical as it is chilling, as astonishing as it is empathic, Our Missing Hearts arguably achieves literary perfection.” —Booklist (starred review)

“Like Ng’s previous novels, this one promises to be thrillingly paced and deeply felt.” —Literary Hub, "Most Anticipated Books of 2022"

“An eerie, prophetic novel . . . [that] showcases Ng's own ingenuity and range. Brilliantly envisioned and filled with Ng's signature tender, intimate character work and complex family dynamics, this coming-of-age story asks what it means to be a good parent or a good citizen when every child is at risk, as well as what power art has to challenge injustice.” —Shelf Awareness

Our Missing Hearts: A Novel (Hardcover)

Everything I Never Told You: A Novel (Paperback)