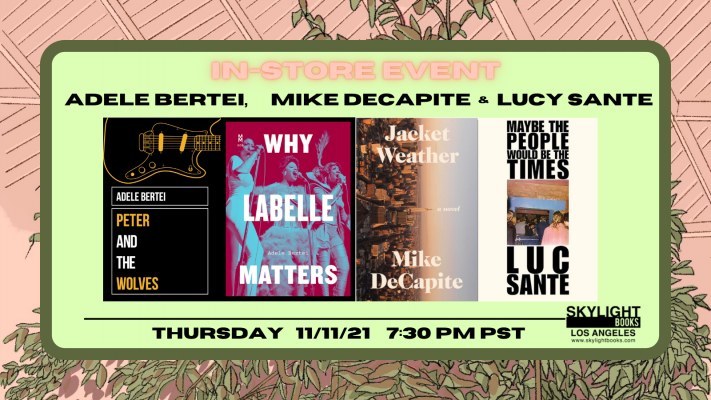 Join us at Skylight for a special evening with Adele Bertai, Mike DeCapite and Lucy Sante! Masks are required in the store.

Adele Bertei played a lead role in Lizzie Borden’s Born in Flames. Her first story "1970" was published in the compilation, The New Fuck You: Adventures in Lesbian Reading by editor Eileen Myles, and her books include the memoir Peter and the Wolves (2020) and Why Labelle Matters (2021). Her next book, Twist: a Memoir will be released by ZE Books in the spring of 2022.

Mike DeCapite's novel Jacket Weather is just out from Soft Skull Press. His other published work includes the novel Through the Windshield, the chapbooks Sitting Pretty and Creamsicle Blue, and the short-prose collection Radiant Fog. A former Mission resident, DeCapite lives in New York City.

Lucy Sante's books include Low Life, The Factory of Facts, Kill All Your Darlings, The Other Paris, and most recently Maybe the People Would Be the Times. Nineteen Reservoirs will be published in 2022.

About Why Labelle Matters (University of Texas Press):

Performing as the Bluebelles in the 1960s, Patti LaBelle, Nona Hendryx, and Sarah Dash wore bouffant wigs and chiffon dresses, and they harmonized vocals like many other girl groups of the era. After a decade on the Chitlin Circuit, however, they were ready to write their own material, change their name, and deliver—as Labelle—an electrifyingly celestial sound and styling that reached a crescendo with a legendary performance at the Metropolitan Opera House to celebrate the release of Nightbirds and its most well-known track, “Lady Marmalade.” In Why Labelle Matters, Adele Bertei tells the story of the group that sang the opening aria of Afrofuturism and proclaimed a new theology of musical liberation for women, people of color, and LGBTQ people across the globe.

With sumptuous and galactic costumes, genre-bending lyrics, and stratospheric vocals, Labelle’s out-of-this-world performances changed the course of pop music and made them the first Black group to grace the cover of Rolling Stone. Why Labelle Matters, informed by interviews with members of the group as well as Bertei’s own experience as a groundbreaking musician, is the first cultural assessment of this transformative act.

Nick Hornby meets Patti Smith, Mean Streets meets A Visit From the Goon Squad in this quintessential New York City story about two people who knew each other in the downtown music scene in the 1980s, meet again in the present day, and fall in love.

Mike knew June in New York’s downtown music scene in the eighties. Back then, he thought she was “the living night—all the glamour and potential of a New York night when you’re 25.” Now he’s twice divorced and happy to be alone—so happy he’s writing a book about it. Then he meets June again. “And here she was with a raincoat over the back of the chair talking about getting a divorce and saying she’s done with relationships. Her ice-calm eyes are the same, the same her glory of curls.”

Jacket Weather is about awakening to love—dizzying, all-consuming, worldview-shaking love—when it’s least expected. It’s also about remaining alert to today’s pleasures—exploring the city, observing the seasons, listening to the guys at the gym—while time is slipping away. Told in fragments of narrative, reveries, recipes, bits of conversation and snatches of weather, the book collapses a decade in Mike and June’s life and shifts a reader to a glowing nostalgia for the present.

About Maybe the Peole Would Be the Times (Verse Chorus Press):

In her second collection (after Kill All Your Darlings, 2007), Lucy Sante pays homage to Patti Smith, Rene Ricard, and Georges Simenon; traces the history of tabloids; surveys the landscape that gave birth to the Beastie Boys; explores the back alleys of vernacular photography; sounds a threnody for the forgotten dead of New York City.

The glue holding the collection together is autobiography. Every item carries deep personal significance, and most are rooted in lived experience, in particular Sante’s youth on the Lower East Side of New York in the fertile 1970s and ’80s. She traces her deep engagement with music, her experience of the city, her progression as an artist and observer, her love life and ambitions. Maybe the People Would Be the Times is organized as a series of sequences, in which one piece leads into the next. Memoir flows into essay, fiction into critical writing, humor into poetry, the pieces answering and echoing one another, examining subjects from multiple vantages. The collection shows Sante at her most lyrical, impassioned, and imaginative, a writer for whom every assignment brings the challenge of inventing a new form.

Praise for Why Labelle Matters:

“Labelle changed how we look at women singers. No longer were they 'girl groups.' They and we were grown up. Voulez-vous coucher avec moi? You bet. This is the book that tells us how and why.” - Nikki Giovanni, author of Make Me Rain: Poems & Prose

“Finally, here's a book that pays tribute to the true mothers of Afrofuturism.”- Lenny Kravitz, author of Let Love Rule

“A marvelous account of the whole magnificent Labelle phenomenon.” -Angela McRobbie, author of Feminism and the Politics of Resilience, Goldsmiths, University of London

“A smart, shrewd, joyful read, as piercing as any top C shriek from the woman who gave Labelle their name.” - Barney Hoskyns, author of Glam! Bowie, Bolan, and the Glitter Rock Revolution

"So very real . . . A sad but sweet song about the uncertainty of middle age and how funny it is when time slips away." --Kirkus Reviews

Jacket Weather is a beautiful, evocative account of a late-in-life love sprung into being in early twenty-first-century Manhattan, characters tossed forth from the aftermath of the punk rock seventies. Protagonist Mike spins cryptic, poetic observations of his daily life, strikes random and true chords, pen as Telecaster. His plaintive adoration of June, the love of his life, is painted with enduring mystery and great respect. I loved this book." --Lee Ranaldo, Sonic Youth, author of Road Movies and jrnls80s

In this roman à clef--minus the clef--I can clearly hear the music of the NYC streets; feel the L train as it hums; and can smell something cookin'--a modern Moveable Feast. --Clinton Heylin, author of The Double Life of Bob Dylan and From the Velvets to the Voidoids: The Birth of American Punk Rock

Mike DeCapite has an eye for deep beauty in the mundane. He writes prose that makes poetry of just walking down the street. What he observes injects a charged current into life's moments between. Reading Jacket Weather is like listening to the world reveal its secrets. --Robert Gordon, author of It Came from Memphis and Respect Yourself: Stax Records and the Soul Explosion

Praise for Maybe the Peole Would Be the Times:

"Lucy Sante is a superb writer who can give astonishing form to floating moods and thoughts that no one noticed before." - John Ashbery

Maybe the People Would Be the Times (Paperback)