AT SKYLIGHT: ASHTON POLITANOFF in conversation with EMILY HALL 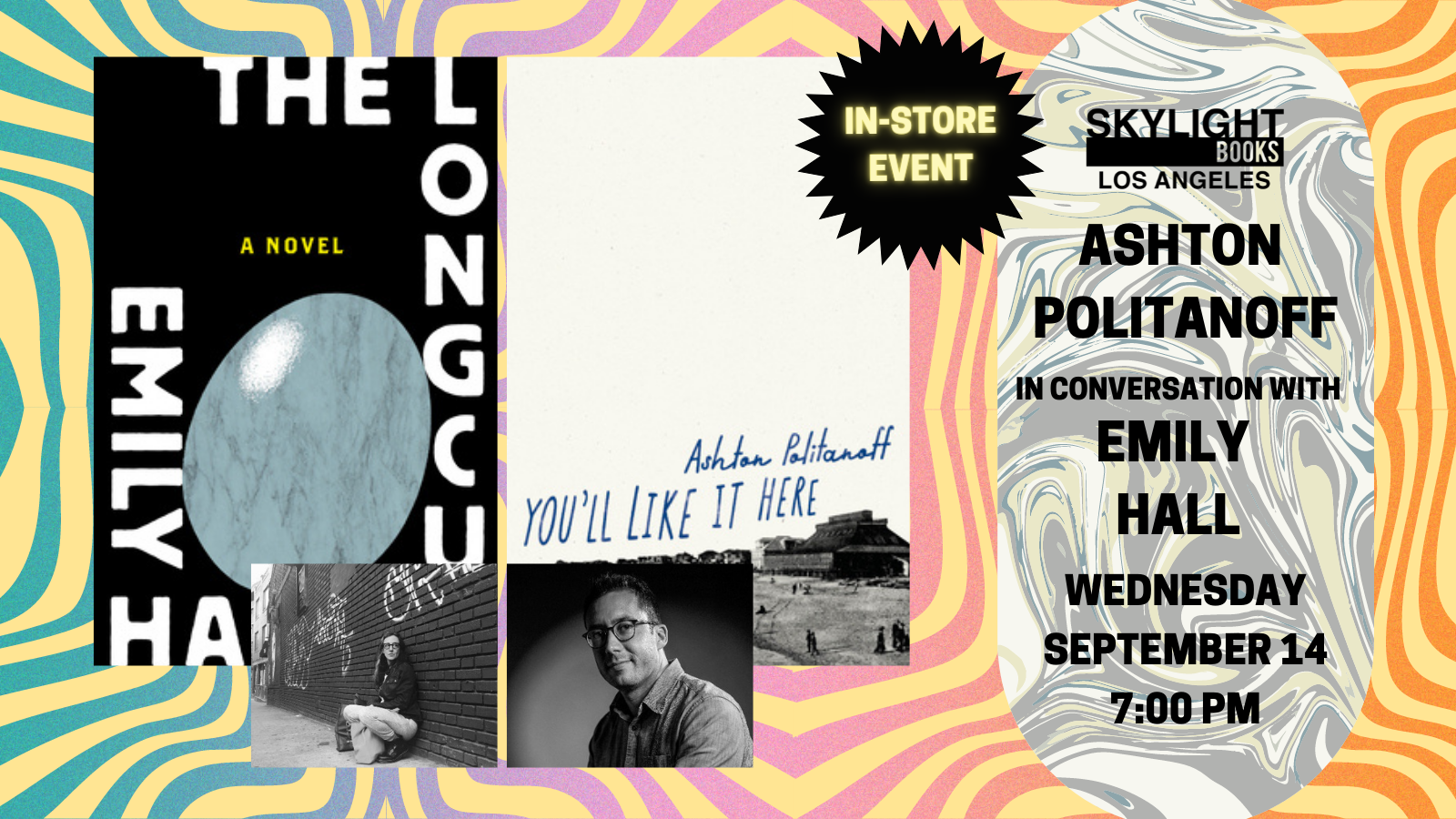 You'll Like it Here is a haunting bricolage, divided into three parts, that excavates the forgotten history of Redondo Beach in the early 1900's through old news clippings, advertisements, recipes and other ephemera that speak to the ills of male stoicism, industrialization and capitalism, and environmental displacement. Ashton used digital archives from the Redondo Reflex and other city adjacent newspapers as the basis for his surrealist account, masterfully tracing this larger shift away from coastal maritime repose in the wake of the Spanish Flu, the Great Depression, and World War II through momentary fragments that feel as real and palpable as they do transient, mythological, and strangely reminiscent of our current times.

Formally, You'll Like it Here works in conversation with Michael Ondaatje's The Collected Works of Billy the Kid, Maggie Nelson's Bluets, Amina Cain's Indelicacy, and Kathryn Scanlan's Aug 9 Fog. The novel also embraces a multi-register, journalistic storytelling that questions the tenuous line between objectivity and subjectivity in documenting the unreliability of history--both personal and collective--brilliantly balancing voids of loss, absence, and disappearance with moments of natural transcendence and miraculous phenomena.

Ashton Politanoff’s writing has appeared frequently in NOON, as well as New York Tyrant, Conjunctions, Egress, and other print and digital journals. Several of his stories have been anthologized, and he is a full-time English Instructor at Cypress College.

The narrator of The Longcut is an artist who doesn’t know what her art is. As she gets lost on her way to a meeting in an art gallery, walking around in circles in a city she knows perfectly well, she finds herself endlessly sidetracked and distracted by the question of what her work is and how she’ll know it when she sees it.

Her mental peregrinations take her through the elements that make up her life: her dull office job where she spends the day moving items into a “completed” column, insomniac nights in her so-called studio (also known as her tiny apartment), encounters with an enigmatic friend who may or may not know her better than she knows herself. But wherever she looks she finds only more questions—what is the difference between the world and the photographed world, why do objects wither in different contexts, what is Cambridge blue—that lead her further away from the one thing that really matters.

An extraordinary feat of syntactical dexterity and comic ingenuity, The Longcut is ultimately a story of resistance to easy answers and the place of art and the artist in the world.

Emily Hall has been a contributor to Artforum since 2003; her writing has also appeared in the New York Times Book Review, The Stranger, and the zine RedHeaded StepChild. The Longcut, her first novel, was shortlisted for the 2020 Novel Prize. She lives in New York, where she edits exhibition catalogues at The Museum of Modern Art.

“I remember how Knut Hamsun’s Hunger scared & excited me when I was young & now, later on, Emily Hall’s The Longcut has produced its own inimitable effect. I think of a mayor I read about who advocated digging a hole so big there’s no alternative to filling it. Emily Hall’s digging (for art) is bedraggled and ecstatic (“I was a lunatic for miles”) it makes its mark and I am helplessly subsumed in it still. Her Longcut is like an Artist’s Way for bad kids.” —Eileen Myles

“The anxieties of the artist are vigorously analyzed to the point of near insanity in Emily Hall's schizophrenic debut. An artist walks through a city to an appointment, asking the simple and unanswerable question: what is my work? Hilarious and claustrophobic, angular and digressive, The Longcut questions the role of capitalism in creation, while proving it's nearly impossible to make art if one thinks about it too much.” —Mark Haber

“Bold and irreverent: like a DYMO machine gone nuts on a Mondrian print, The Longcut is a hilariously inventive take on what it means to be making “work” in the self-conscious world of art-making while also, at the very same time, trying get through the many material distractions of an office job. A striking debut!” —Jen Craig