AT SKYLIGHT: BEN SHATTUCK presents SIX WALKS: IN THE FOOTSTEPS OF HENRY DAVID THOREAU, in conversation with JENNY SLATE 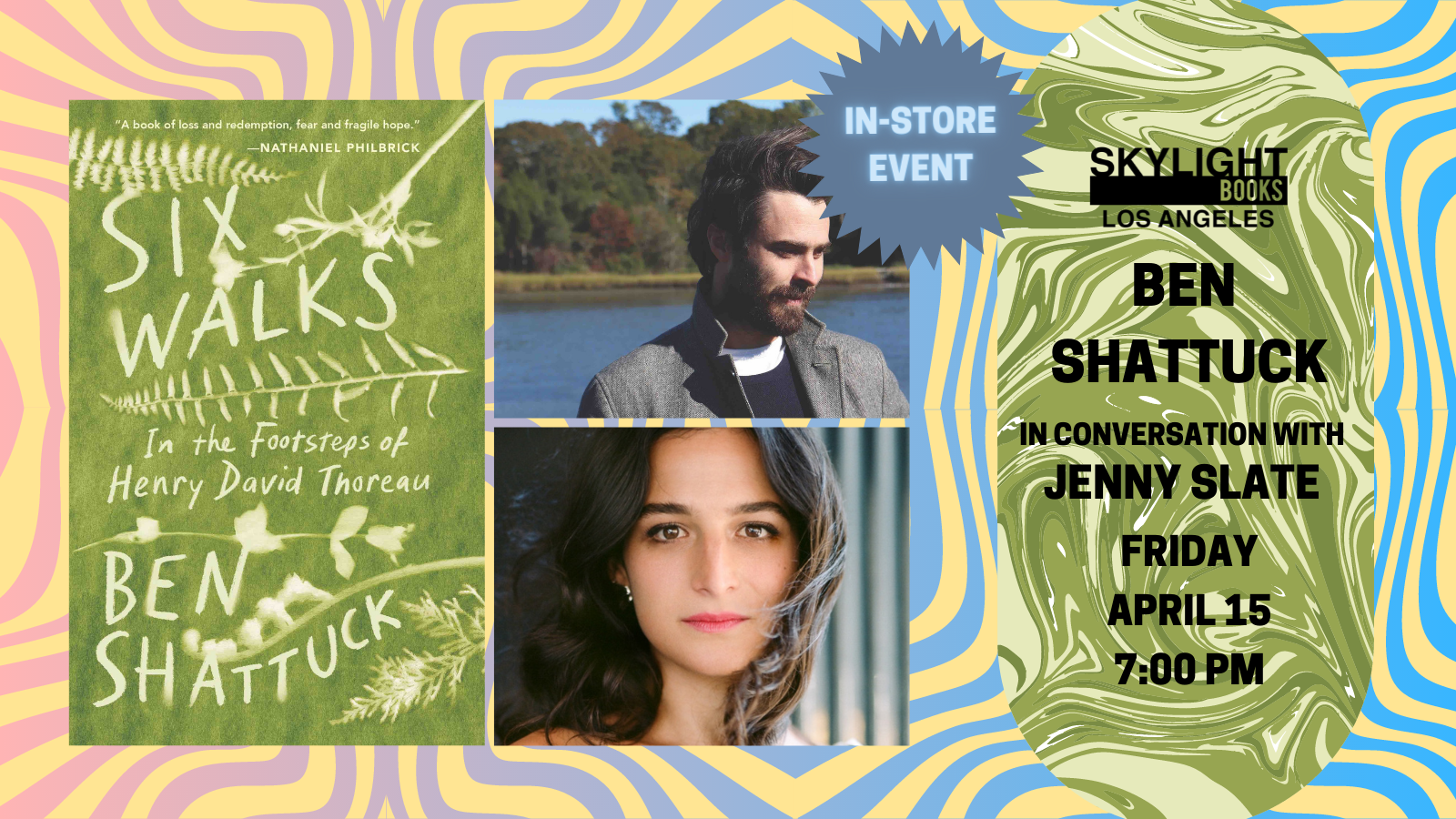 On an autumn morning in 1849, Henry David Thoreau stepped out his front door to walk the beaches of Cape Cod. Over a century and a half later, Ben Shattuck does the same. With little more than a loaf of bread, brick of cheese, and a notebook, Shattuck sets out to retrace Thoreau’s path through the Cape’s outer beaches, from the elbow to Provincetown’s fingertip.

This is the first of six journeys taken by Shattuck, each one inspired by a walk once taken by Henry David Thoreau. After the Cape, Shattuck goes up Mount Katahdin and Mount Wachusett, down the coastline of his hometown, and then through the Allagash. Along the way, Shattuck encounters unexpected characters, landscapes, and stories, seeing for himself the restorative effects that walking can have on a dampened spirit. Over years of following Thoreau, Shattuck finds himself uncovering new insights about family, love, friendship, and fatherhood, and understanding more deeply the lessons walking can offer through life’s changing seasons.

Intimate, entertaining, and beautifully crafted, Six Walks is a resounding tribute to the ways walking in nature can inspire us all.

Ben Shattuck, author of the debut nonfiction book Six Walks, is a graduate of the Iowa Writers’ Workshop and a recipient of the PEN/Robert J. Dau Short Story Prize and a 2019 Pushcart Prize. He lives with his wife and daughter on the coast of Massachusetts, where he owns and operates a general store built in 1793.

Jenny Slate is an actor, stand-up comedian, and the New York Times bestselling author of the Little Weirds and children's book Marcel The Shell with Shoes On. She has been in many movies and TV shows and also plays many cartoon animals. She lives with her husband, daughter, and their dog Sally. Jenny is a graduate of Columbia University.

Resplendent. . . . Echoing Thoreau’s brilliant reflections with his own, Shattuck distills the healing power of nature into a narrative that’s a pure pleasure to wander through. Fans of Annie Dillard will find this mesmerizing. — Publishers Weekly, Starred Review

A gorgeous reminder that walking is the most radical form of locomotion nowadays. — Nick Offerman

I think Thoreau would have liked this book, and that’s a high recommendation. — Bill McKibben, author of The End of Nature

Walking as means of healing, walking as a way of seeing what’s there, walking as a method of pulling you out of yourself and rejoining the world—in this beautiful, smart, and moving book, Ben Shattuck shows us where putting one foot in front of the other can take us. Thoreau’s footsteps serve as map, but Shattuck has made a fresh journey right into the heart of things. In painterly prose, he brings us along on his walks and proves the best sort of guide: curious, open to the chance encounter, deeply attuned to rhythms natural and personal and to the strange joys to be found even in periods of pain. Most of all, he reminds us, every step of the way, of what’s on offer every time we walk out the door. — Nina MacLaughlin, author of Summer Solstice: An Essay

By walking in Thoreau’s footsteps, Ben Shattuck ends up following the long trail left by wandering thinkers and writers like Rousseau, Muir, Walser, Benjamin, and Solnit. Along the way, Six Walks offers a moving meditation on nature and history—and what our precarious place between these two realms may be. — Hernan Diaz, author of In the Distance

Inspired by Thoreau, but soon onto something that is very much his own, Ben Shattuck takes us on a journey that bores into the history of both himself and his native New England.  A book of loss and redemption, fear and fragile hope, Six Walks is rich, evocative, and like the boat gunwale that cuts off the tip of his finger, unexpectedly dangerous—in that best of Thoreauvian ways. — Nathaniel Philbrick, author of In the Hurricane’s Eye

What a very beautiful book. Every page is a pleasure. Charming, insightful, and full of humanity, this gem reminded me how profound it can feel to simply walk the earth. — Karen Thompson Walker, author of The Dreamers

A beautiful and thought-provoking journey of discovery, which will leave you very glad that you walked a while with Ben Shattuck. — Eric Jay Dolin, author of Rebels at Sea

Ben Shattuck asks of Thoreau ‘Why was it so comforting to read this antique account of winter and loss?’—and I felt the same about Shattuck’s book. A beautiful account of wandering through a season of illness and loss, and walking with Thoreau into the light. — Casey Walker, author of Last Days in Shanghai

Six Walks: In the Footsteps of Henry David Thoreau (Hardcover)