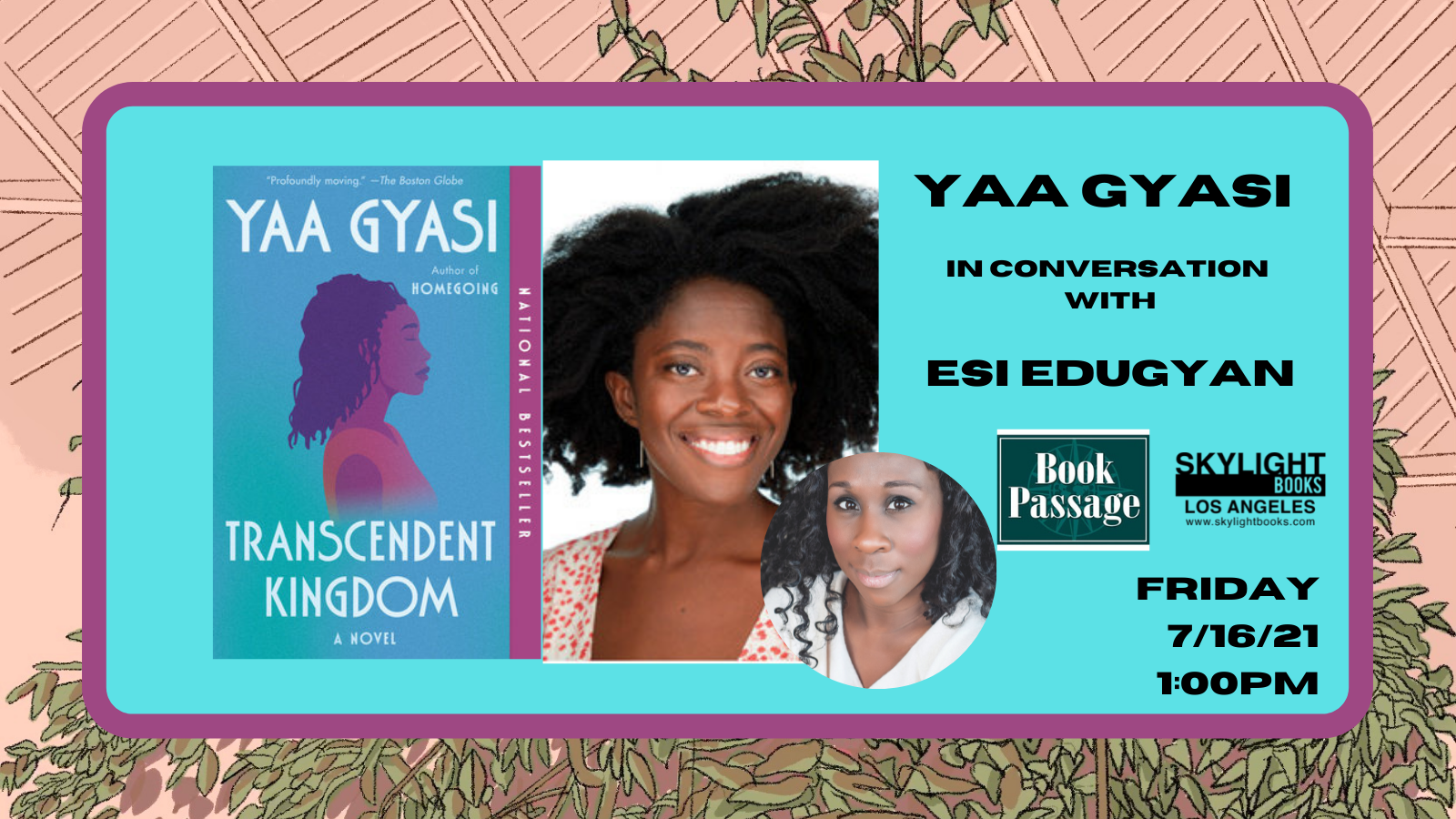 Skylight Books and Book Passage are delighted to host Yaa Gyasi for the paperback launch of TRANSCENDENT KINGDOM, in conversation with Esi Edugyan!

Get tickets for the livestream here.

Gifty is a sixth-year PhD candidate in neuroscience at the Stanford University School of Medicine studying reward-seeking behavior in mice and the neural circuits of depression and addiction. Her brother, Nana, was a gifted high school athlete who died of a heroin overdose after an ankle injury left him hooked on OxyContin. Her suicidal mother is living in her bed.

Gifty is determined to discover the scientific basis for the suffering she sees all around her. But even as she turns to the hard sciences to unlock the mystery of her family’s loss, she finds herself hungering for her childhood faith and grappling with the evangelical church in which she was raised, whose promise of salvation remains as tantalizing as it is elusive.

Yaa Gyasi was born in Ghana and raised in Huntsville, Alabama. She holds a BA in English from Stanford University and an MFA from the Iowa Writers’ Workshop, where she held a Dean’s Graduate Research Fellowship. She lives in Brooklyn.

Esi Edugyan is author of the novels The Second Life of Samuel Tyne and Half-Blood Blues, which won the Scotiabank Giller Prize and was a finalist for the Man Booker Prize, the Governor General’s Literary Award, the Rogers Writers’ Trust Fiction Prize and the Orange Prize. She lives in Victoria, British Columbia.

“Transcendent Kingdom trades the blazing brilliance of Homegoing for another type of glory, more granular and difficult to name.”
—The New York Times Book Review

“Laser-like. . . . A powerful, wholly unsentimental novel about family love, loss, belonging and belief that is more focused but just as daring as its predecessor, and to my mind even more successful. . . . [Transcendent Kingdom] is burningly dedicated to the question of meaning. . . . The pressure created gives her novel a hard, beautiful, diamantine luster.”
—The Wall Street Journal

“Yaa Gyasi’s profoundly moving second novel takes place in the vast, fragile landscape where the mysteries of God and the certainties of science collide. Through deliberate and precise prose, the book becomes an expansive meditation on grief, religion, and family.”
—The Boston Globe

“A stealthily devastating novel of family, faith and identity that’s as philosophical as it is personal.”
—USA Today

“Will stay with you long after you’ve finished it.”
—Real Simple

“Achingly lovely. . . . With her sophomore novel, Gyasi is narrowing her scope. Transcendent Kingdom is the story of one specific girl in one specific family: it is interior, psychological, and deeply focused on sifting through the layers of Gifty’s mind as she studies and prays and experiments to try to find her way to what lies at the core of human beings.”
—Vox