AT SKYLIGHT: CLAIRE VAYE WATKINS presents I LOVE YOU BUT I'VE CHOSEN DARKNESS with EDAN LEPUCKI 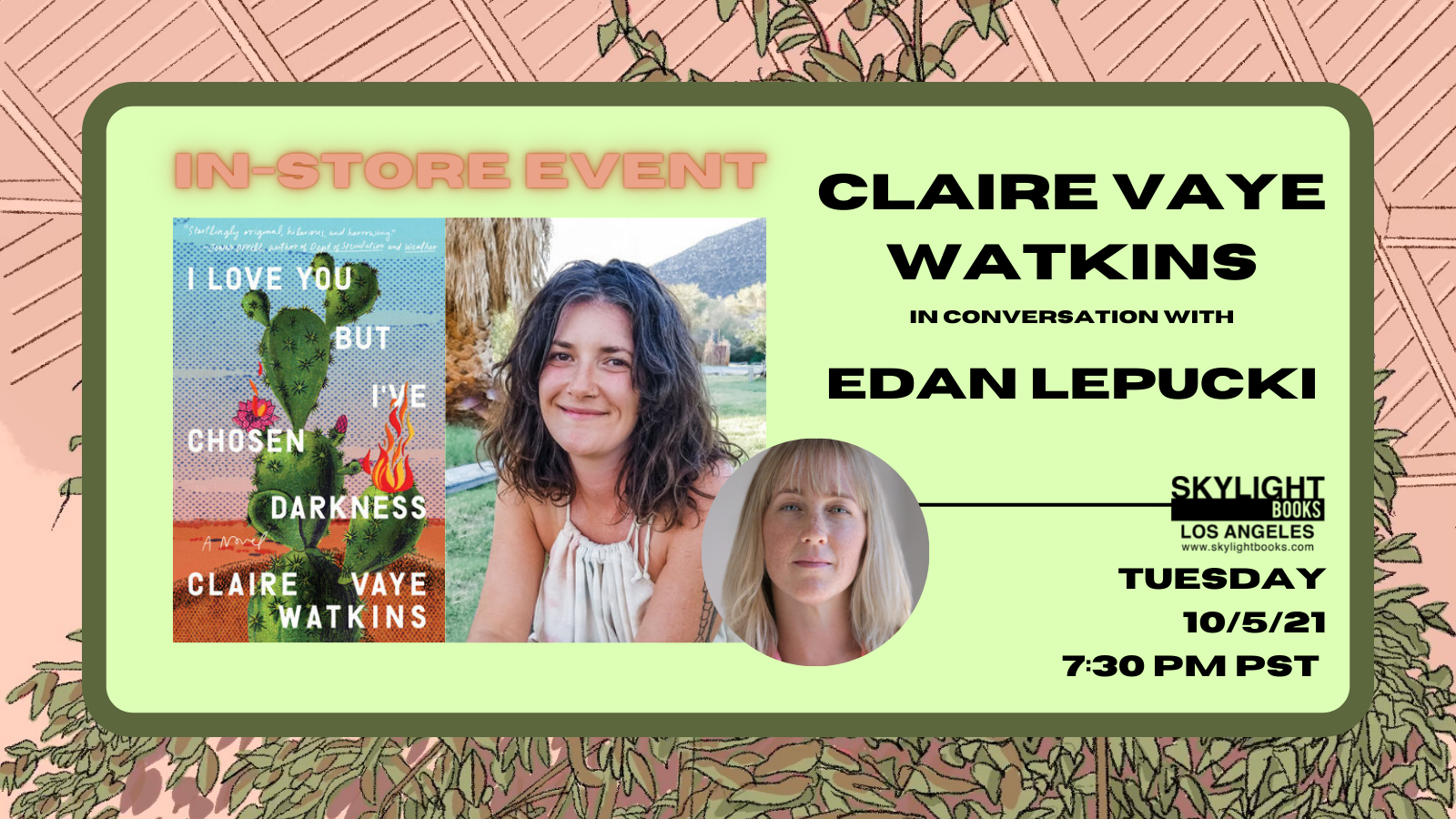 I Love You But I've Chosen Darkness (Riverhead Books)

A darkly funny, soul-rending novel of love in an epoch of collapse—one woman’s furious revisiting of family, marriage, work, sex, and motherhood.

Since my baby was born, I have been able to laugh and see the funny side of things. a) As much as I ever did. b) Not quite as much now. c) Not so much now. d) Not at all. Leaving behind her husband and their baby daughter, a writer gets on a flight for a speaking engagement in Reno, not carrying much besides a breast pump and a spiraling case of postpartum depression. Her temporary escape from domestic duties and an opportunity to reconnect with old friends mutates into an extended romp away from the confines of marriage and motherhood, and a seemingly bottomless descent into the past. Deep in the Mojave Desert where she grew up, she meets her ghosts at every turn: the first love whose self-destruction still haunts her; her father, a member of the most famous cult in American history; her mother, whose native spark gutters with every passing year. She can’t go back in time to make any of it right, but what exactly is her way forward? Alone in the wilderness, at last she begins to make herself at home in the world.

Bold, tender, and often hilarious, I Love You but I’ve Chosen Darkness reaffirms Watkins as one of the signal writers of our time.

Claire Vaye Watkins is the author of the novel Gold Fame Citrus and the short story collection Battleborn, winner of the Story Prize, the Dylan Thomas Prize, the New York Public Library's Young Lions Fiction Award, and the Rosenthal Family Foundation Award from the American Academy of Arts and Letters, among other prizes. A National Book Foundation 5 Under 35 honoree, Watkins is a professor at the University of California Irvine and lives in Twenty-nine Palms, CA.

Edan Lepucki is the bestselling author of the novels California and Woman No. 17, as well as the editor of Mothers Before: Stories and Portraits of Our Mothers as We Never Saw Them.

Praise for I Love You But I’ve Chosen Darkness:

“A wily fusion of autobiography and imagination. . . . [Watkins is] reckless, infuriating, ribald, incisive, and hilarious. In the spirit of Edward Abbey, Hunter Thompson, and Joy Williams, Watkins has forged a desert tale of howling pain and a chaotic quest for healing mythic in its summoning of female power in a realm of double-wides, loaded dice, broken glass, and hot springs.” —Booklist (starred)

“There’s some kind of genius sorcery in this novel. It’s startlingly original, hilarious and harrowing by turns, finally transcendent. Watkins writes like an avenging angel. It’s thrilling and terrifying to stand in her wake.” —Jenny Offill, author of Dept. of Speculation and Weather

“This book is stupendously good. It practically vibrates in its ferocious frankness, and is so funny too that one can’t help but fall for this voice, even in the pain, because of the pain, with the pain. A marvel.”—Aimee Bender, author of The Particular Sadness of Lemon Cake and The Butterfly Lampshade

I Love You but I've Chosen Darkness: A Novel (Hardcover)

Mothers Before: Stories and Portraits of Our Mothers as We Never Saw Them (Hardcover)