AT SKYLIGHT: DEBBIE MILLMAN, author of WHY DESIGN MATTERS with RANDA JARRAR 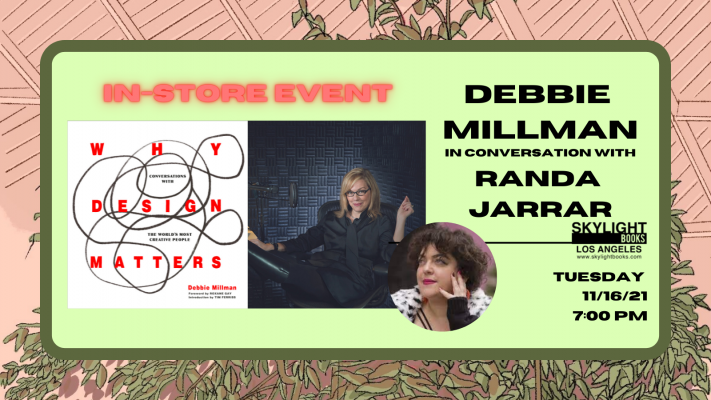 A sneak peek of the forthcoming WHY DESIGN MATTERS, available for pre-order now! This event is free and open to the public. Please wear a mask while you are inside the store.

Over the course of her popular podcast’s fifteen-year reign, Debbie Millman has interviewed more than 400 creative minds. In those conversations, she has not only explored what it means to design a creative life, but has, as Millman’s wife, Roxane Gay, assesses in her foreword, “created a gloriously interesting and ongoing conversation about what it means to live well, overcome trauma, face rejection, learn to love and be loved, and thrive both personally and professional.”

In this illustrated, curated anthology, Millman includes approximately 60 of her best interviews with visionaries from across diverse fields. Grouped by category—Legends, Truth Tellers, Culture Makers, Trendsetters, and Visionaries—these eye-opening, entertaining, and enlightening conversations—offer insights into new ways of being and living.

Accompanying each entry is a brief biography, a portrait photographed by Millman, and a pull quote written in Millman’s artistic hand. Why Design Matters features 100 images and includes interviews with:

Named “one of the most creative people in business” by Fast Company, and “one of the most influential designers working today” by Graphic Design USA, Debbie Millman is also an author, educator, curator and host of the podcast “Design Matters,” one of the world’s first and longest running podcasts. In the 16 years since its inception, “Design Matters” has garnered a Cooper Hewitt National Design Award, six Webby nominations, and an Apple Podcasts “best overall podcast” designation. In 2009 Debbie co-founded with Steven Heller the world’s first graduate program in branding at the School of Visual Arts in New York City. She is the author of seven books, including her latest, Why Design Matters, and has been published in over 10 languages. Her writing and illustrations have appeared in The New York Times, The Washington Post, New York Magazine, Print Magazine, Design Observer and Fast Company. Her artwork has been included at prestigious universities and museums around the world. Debbie is President Emeritus of AIGA and is a frequent speaker on design and branding. Her TED talk  was ranked one of the best TED talks of 2020.  She lives in New York and Los Angeles with her wife Roxane Gay.

Randa Jarrar is the author of the memoir Love Is An Ex-Country, the novel A Map of Home, and the collection of stories Him, Me, Muhammad Ali. She is also a performer who has appeared in independent films and in the TV show RAMY. Her essays have appeared in The New York Times Magazine, Salon, Bitch, Buzzfeed, and elsewhere. She is a recipient of a Creative Capital Award and an American Book Award, as well as awards and fellowships from the Lannan Foundation, PEN, and others. She lives in Los Angeles.

Praise for Why Design Matters:

“Debbie Millman is ready to guide anyone through one of the most engaging conversations of their lives.” — Roxane Gay

“Even the most jaded, world-weary traveler cannot help but feel that they are the only person in the world when Debbie is sitting across from them…. That singular, empathic attention is a rare gift to the world.” — Tim Ferriss

Why Design Matters: Conversations with the World's Most Creative People (Hardcover)