AT SKYLIGHT: EMAN ABDELHADI presents EVERYTHING FOR EVERYONE 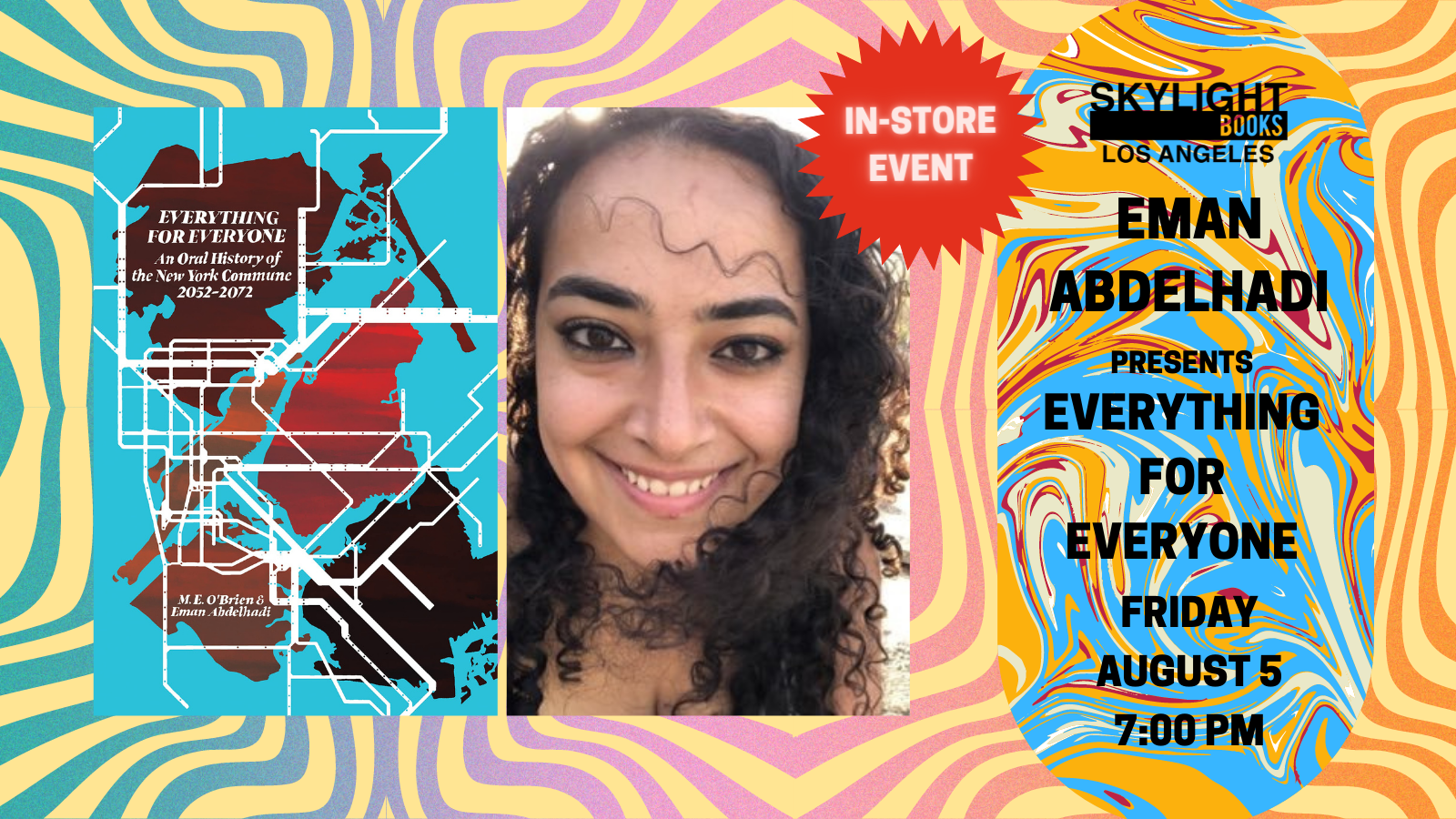 Everything for Everyone: An Oral History of the New York Commune, 2052-2072 (Common Notions)

By the middle of the twenty-first century, war, famine, economic collapse, and climate catastrophe had toppled the world's governments. In the 2050s, the insurrections reached the nerve center of global capitalism--New York City. This book, a collection of interviews with the people who made the revolution, was published to mark the twentieth anniversary of the New York Commune, a radically new social order forged in the ashes of capitalist collapse.

Here is the insurrection in the words of the people who made it, a cast as diverse as the city itself. Nurses, sex workers, antifascist militants, and survivors of all stripes recall the collapse of life as they knew it and the emergence of a collective alternative. Their stories, delivered in deeply human fashion, together outline how ordinary people's efforts to survive in the face of crisis contain the seeds of a new world.

Eman Abdelhadi is an academic, activist, and artist based in Chicago, IL. Her research as faculty at the University of Chicago focuses on gender differences in the community trajectories of Muslim Americans. Abdelhadi has also spent many years organizing. She has been involved in the movement for Palestinian liberation, Black Lives Matter, counter-surveillance and abolitionism, marxist feminist mobilization as well as workplace struggles. She is currently co-coordinating the Muslim Alliance for Gender and Sexual Diversity, a national organization that provides support and builds community by and for Queer Muslims. Abdelhadi maintains an active creative practice that includes performance art and essay and poetry writing. Her writing has appeared in Jacobin, Muftah, and other publications.

Praise for Everything for Everyone -

“Everything for Everyone is the book we all need right now. It lets us imagine what can feel unimaginable in this moment—a total reorganization of social relations toward our mutual survival and the dismantling of the ruling death cult. This is a book we will all be obsessing over, arguing with, and talking about in the coming years as we try to conceive how collective action can get us through these harrowing times. I am grateful to Abdelhadi and O'Brien for making something we need so bad so compelling and readable.” —Dean Spade, author of Mutual Aid

“Charts dizzying, delightful new futures for science fiction, urban planning, and engaged social practice. I spent 15 years as a community organizer and never dreamed of seeing something that so bravely, brilliantly combines liberational nonfiction and radical documentary with the exuberance of the best speculative storytelling.“ —Sam J. Miller, Nebula-Award-winning author of Blackfish City and The Art of Starving

“Eman Abdelhadi and M. E. O’Brien’s tall tales of the future draw on real experiences of the past and present. The book’s multiple narratives, equal parts hope and pain, merge into a prayer for collective survival and for the eventual flourishing of our powers of love and invention. Voices from as-yet-unlived lives instill faith that our becoming is not yet done. Abdelhadi and O’Brien have created a vivid image of the possibility that we will one day make a home of the world.” —Hannah Black

“The special magic of Everything for Everyone is that it combines the genres of the oral history interview with speculative utopian fiction. Oral histories can show how in their everyday lives ordinary people can make the world. Utopian fiction can show the worlds we might want to be making. Every cook, or sex worker, can govern. And this is the life they might build from the ruins of this civilization, such as it is. Such a pleasure to feel one could be making the world over with them.” —McKenzie Wark, author of The Beach Beneath the Street

“Eman Abdelhadi and M. E. O’Brien are changing the game of what the novel is and what the novel can be. Much as James Baldwin, Ta-Nehisi Coates and Imani Perry did with the epistolary form in non-fiction, Everything for Everyone uses speculative oral history to expand and explode the limits of what fiction can do. Their imagined oral histories from many parties help us understand the present from many possible points of view in the future looking back, like Rashômon meets House of Leaves. In Everything for Everyone, binaries (of male-versus-female, fiction-versus-non-fiction, past-versus-future) are irrelevant compared to something much more interesting and important that Abdelhadi and O’Brien seek to illustrate: truth, and the way we might find liberation in it.” —Steven W. Thrasher, author of The Viral Underclass

“I had no idea I was a post-revolution speculative fiction fangirl till I started reading Everything for Everyone, which kicks off with a food riot at the Hunts Point Market led by a sex worker. I’m really bummed out by the fact that I’ll be 82—hopefully!—when their fictional revolution kicks off and dead by the time the dust settles. Exciting to read something hopeful, intersectional and an antidote to our dystopian doldrums.” —Sherry Wolf, author of Sexuality and Socialism: History, Politics and Theory of LGBT Liberation

“In this genre-bending work of utopian fiction, O'Brien and Abdelhadi imagine a world that might emerge from the ashes of our own.  Part speculative social science, part abolitionist manifesto, it explores the social forms and political possibilities of life after capitalism—the novel ways of organizing life, doing gender, and coping with the psychic costs of transformation that may follow the inevitable crises of capital and climate that lie in our future. Like the best utopian fiction, Everything for Everyone is also a startling work of political theory: it gives us the opportunity, as all utopias do, to learn about our own desires and hopes for a way out of our current conjuncture.” —Katrina Forrester, author of In the Shadow of Justice

“Leftists are often accused of being against everything, but not having a vision of what we're fighting for. Everything for Everyone is a corrective, a sweeping vision of the type of world and society we imagine can and will provide for us all, abundantly. Not all beautiful novels are invested in social restructuring, and not all social restructuring is envisaged in novels, but here we have exactly their meeting point: a beautiful novel bristling with the necessary changes we must make to survive on this planet. The future has sex in it, and community; it has food and labor and joy. It has trauma and memories of the harm, the nightmare, of capitalist precarity. The future is sure to exist; will it have us in it? Everything for Everyone imagines that it will, and, given this remarkable vision, this perpetual possibility, it's now our work to live up to it.” —Joseph Osmundson, author of Virology

“Everything for Everyone is a window into a possible future and a powerful antidote to our present moment’s ubiquitous moods of anti-utopianism, despair, nostalgia, and capitalist-realism. In this must-read speculative fiction, M. E. O’Brien and Eman Abdelhadi have skillfully deployed their joint political, sociological, and psychoanalytic intelligence—capacities they have honed through decades of experience of organizing for trans, working class and Palestinian liberation. Together, O’Brien and Abdelhadi have imagined the messy, imperfect, richly fulfilling, and slowly healing collective life that will be post-capitalism. Convincingly, they present us with an ethnography, not of an ideal society, but of a revolutionary one in flux. Never do they lapse into simplistic or deterministic “solutions” to the crises of the present. The twelve denizens of the world whence Abdelhadi and O’Brien are reporting back are survivors and veterans of exhausting, traumatizing, bloody, unforgettable, complicated, and beautiful transformations.

The interviews collected in these pages chronicle the first stages of the abolition of the family; the history of the ecological restoration projects and interplanetary technologies that might render our planet livable and leisurely; the invention of real democracy; and the armed conflagrations that were necessary along the way. So, if you have ever wondered to yourself, What will the triumph of indigenous land struggles, the overthrow of colonial occupations, and the fall of capitalism look like? Which parts of New York would be at the forefront of a communist revolution, and which would double down into religious, hyper-patriarchal fascism? Whose knowledges of facilitation, healing, conflict resolution and partying will help the population heal from its collective trauma?—then this superb novel is the book for you. Upon reaching the end, I had tears in my eyes. I took to heart the injunction of the nineteenth century utopian feminist Charles Fourier, quoted herein: ‘Your behavior should be governed from now on by the ease and proximity of this immense revolution.’” —Sophie Lewis, author of Abolish the Family: A Manifesto of Care and Liberation

Everything for Everyone: An Oral History of the New York Commune, 2052-2072 (Paperback)