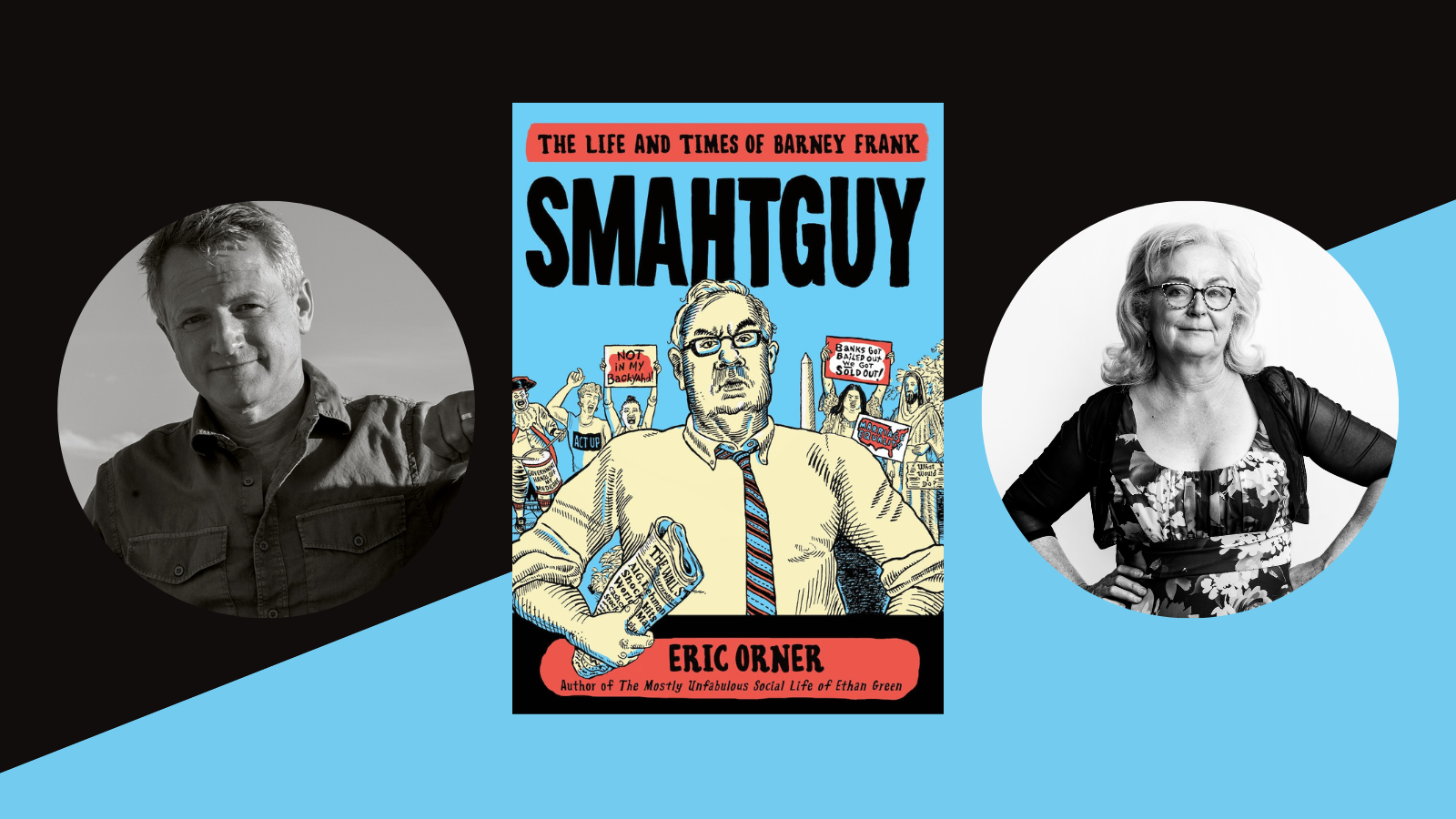 Smahtguy: The Life and Times of Barney Frank (Metropolitan Books)

Eric Orner, the acclaimed cartoonist of one of the country’s most popular and longest-running gay comic strips, The Mostly Unfabulous Social Life of Ethan Green, presents his debut graphic novel—a dazzling, irreverent biography of the iconic and iconoclastic Barney Frank, one of the first gay and out congressmen and a front-line defender of civil rights.

What are the odds that a disheveled, zaftig, closeted kid with the thickest of Jersey accents might wind up running Boston on behalf of a storied Irish Catholic political machine, drafting the nation’s first gay rights laws, reforming Wall Street after the Great Recession, and finding love, after a lifetime assuming that he couldn't and wouldn’t?

In Smahtguy: The Life and Times of Barney Frank, one of America’s first out members of Congress and a gay and civil rights crusader for an era is confirmed as a hero of our age. But more than a biography of an indispensable LGBTQ pioneer, this funny, beautifully rendered, warts-and-all graphic account reveals the down-and-dirty inner workings of Boston and DC politics.

As Frank’s longtime staff counsel and press secretary, Eric Orner lends his first-hand perspective to this extraordinary work of history, paying tribute to the mighty striving of committed liberals to defend ordinary Americans from an assault on their shared society.

Eric Orner is an author and cartoonist whose groundbreaking LGBTQ comic The Mostly Unfabulous Social Life of Ethan Green, is anthologized in 4 books from St. Martin’s Press, and a 2016 omnibus from Northwest Press. The comic was adapted as a feature film in 2006.  His politically charged work has appeared widely in publications including Houghton Mifflin’s Best American Comics, Buzzfeed, The Washington Post, The Boston Globe and McSweeneys.

Eric’s had a bifurcated career, working on Capitol Hill as an attorney and communications director, and in the world of visual arts—doing a stint as a storyboard artist at Walt Disney animation, as well as illustrating many books by his brother, novelist Peter Orner. His debut graphic novel, Smahtguy, the Life and Times of Barney Frank was published by Henry Holt Metropolitan Books in May 2022. Smahtguy was included on a number of Best Books of 2022 lists, including NPR’s which said; “Eric Orner’s sweeping graphic novel about the life of Congressman Barney Frank isn’t just a great story, it’s an enveloping visual experience by a terrific artist. Even if you were to page through this book without looking at any of the words, it would still be a great read”.

Mimi Pond is a lifelong cartoonist and televison writer who has published work in many periodicals such as the Village Voice, the New Yorker Magazine and the Los Angeles TImes. She is the author of seven books.Her works include The “Valley Girls’ Guide to Life” and two best-selling graphic novels, “Over Easy” and “The Customer is Always Wrong,” published in 2014 and 2017 by Drawn and Quarterly. She is currently at work on a graphic biography of the six Mitford Sisters, to be entitled, “Do Admit: Making Sense of the Mitford Sisters.” She is the recipient of the Pen Center USA Award for her body of work, an Inkpot Award and an Eisner Award. Her tv credits include the premiere episode of the Simpsons, “Simpsons Roasting on an Open Fire,” episodes of Pee-wee’s Playhouse, and Designing Women.

“Smahtguy isn't just a great story, it's an enveloping visual experience crafted by a terrific artist with an amazing line . . . This book—like Frank's life—is so epic, people will doubtless be finding new aspects to appreciate for years to come.” — NPR

“An astute, richly detailed profile of political and gay rights icon Barney Frank . . . witty, empathic . . . Orner has a gift for capturing a sense of place, be it the halls of Congress, Boston streets on a sultry summer’s evening, or a depressed whaling town, all rendered in archly funny, colorful cartooning . . . Orner achieves an exceptional balance of poignant biography, warts-and-all character study, and salty political satire. Political bios don’t get much better than this.” — Publishers Weekly (starred review)

“Pleasing . . . lively . . . The best part is the unquiet agitation that made Frank, eloquent and stubborn, a bulldog of a fighter, representing not just his district, but great masses of disenfranchised, marginalized people . . . Fan of Frank will be delighted, and those who don’t realize the extent of his legacy will learn much.” — Kirkus Reviews

“Astonishingly thorough and heartfelt . . . By the end you may, like many of Barney Frank’s constituents, find yourself loving his unkempt, hardworking gruffness, and cheering when he finally finds happiness in his personal life . . . Smahtguy is a smart pick for fans of political biographies.” — Booklist

"Orner has set up a graphic novel with as quick and urgent a tempo as his subject." — Comics Grinder

"Smahtguy restored my battered faith in the American political process. Barney Frank’s relish for the thankless work of governance is deeply inspiring, all the more so because it came at the expense of his personal life. Orner’s masterful visual storytelling, inexhaustible graphic detail, and witty vignettes makes all the procedural nitty gritty read like a thriller." — Alison Bechdel, author of The Secret to Superhuman Strength

"Smahtguy is the story of Barney Frank but also the story of the transformation of America. Eric Orner’s cartooning captures both the frenetic energy of Frank’s times and the person he was: a young man willing to work for civil rights that didn’t include him, who grew to fight not just for others but for himself, too. Unforgettable, complicated, and powerful, like the man himself." — Alexander Chee, author of How to Write an Autobiographical Novel

"Gasp and guffaw at the amazing life story of Barney Frank, a mild-mannered graduate student from Jersey who is transformed into a liberal superhero, struggling to save the world as it blunders from crisis to crisis. Smahtguy is (literally!) the great civic-minded comic book of our time." — Tom Frank, author of The People, No

"A terrific graphic novel about one of the genuine heroes of the gay liberation movement. Smahtguy is funny and touching and remarkably substantive, a lovely tribute to a great American pioneer." — Charles Kaiser, author of The Gay Metropolis

"All too often history sits on the page like a day-old latke. But in Eric Orner’s hands, the story of one of the most compelling and effective members of Congress—cranky, brilliant, passionate Barney Frank—crackles to life through vivid, emotion-packed words and illustrations. I got to the last page of Smahtguy—and read it again." — Eric Marcus, founder and host, Making Gay History podcast

"An insightful, funny, and wonderfully drawn recounting of the life and times of a memorable figure on America's political stage, from the Freedom Summer of 1964 through the Great Recession." — Katie Couric, award-winning journalist

"Eric Orner’s political bildungsroman is full of stunning panels packed with lush detail. He knows how to make you laugh out loud and break your heart, and there’s nobody I trust more to lead me through Barney Frank’s extraordinary career and life." — J.A.K. (Jason Adam Katzenstein), author of Everything's an Emergency

"In this beautifully crafted work, Eric Orner presents an unlikely hero: schlubby Massachusetts congressman Barney Frank. Eschewing policy wonk blather, Smahtguy leads us directly to the center of the maze of D.C. politics, deftly revealing Frank’s complex inner life and relentless drive to improve the world. Orner’s drawing style is perfect for his subject, making for a very human story that, in the hands of lesser talents, might seem as dry as the Congressional Record." — Mimi Pond, author of The Customer is Always Wrong

"A rollicking take on one of the most endearing and impactful members in the history of Congress." — Dave Eggers, author of The Every

Smahtguy: The Life and Times of Barney Frank (Paperback)

The Customer is Always Wrong (Hardcover)