AT SKYLIGHT: HELEN BENEDICT presents MAP OF HOPE AND SORROW with CHARLOTTE INNES 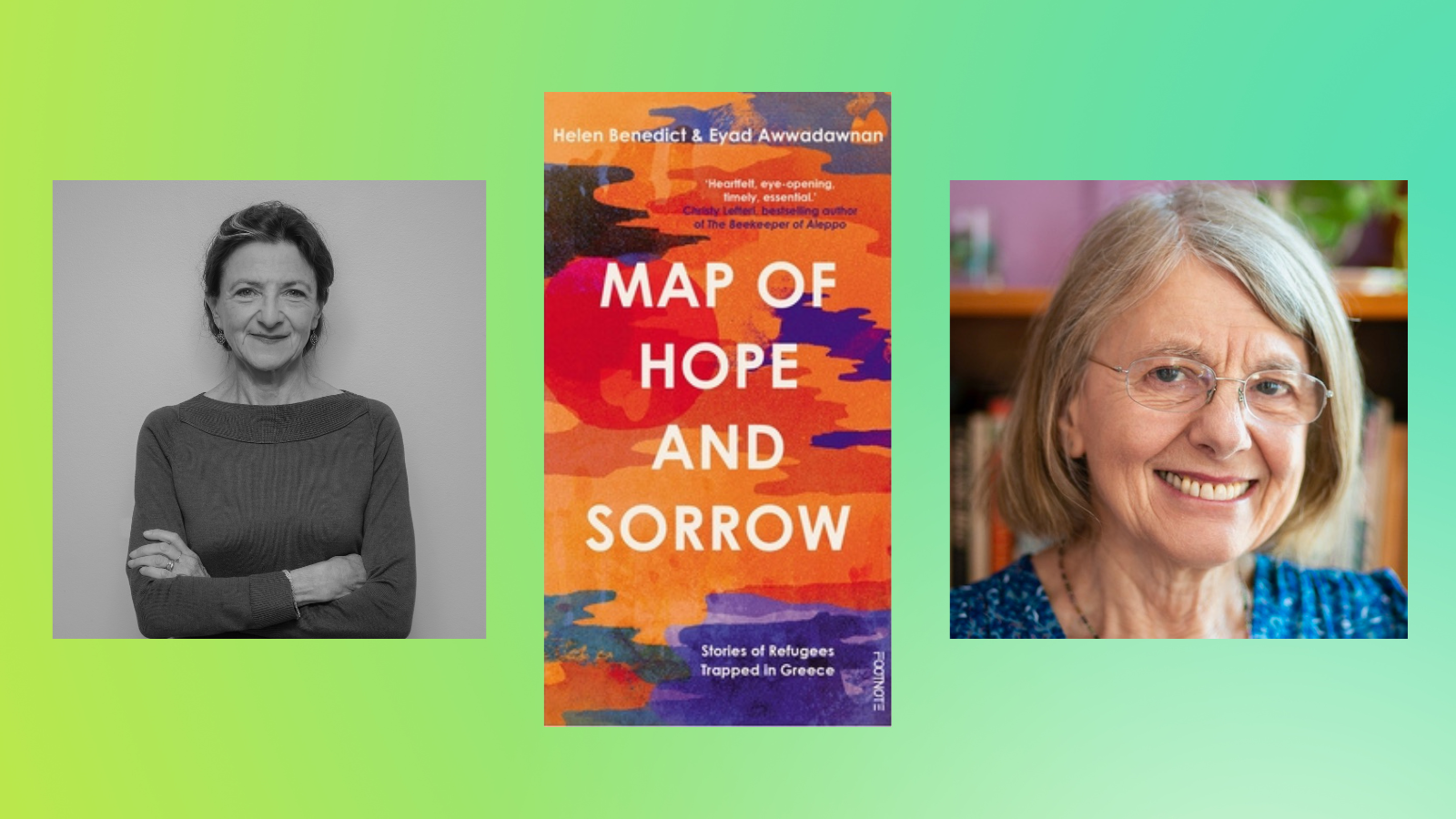 Map of Hope and Sorrow: Stories of Refugees Trapped in Greece (Footnote Press)

The stories of refugees who fled violence or persecution only to become trapped in the worst refugee camps in Europe.

Helen Benedict, award-winning British-American professor of journalism at Columbia University, teams up with Syrian writer and refugee, Eyad Awwadawnan, to present the stories of five refugees who have endured long and dangerous journeys from the Middle East and Africa to Greece.

Hasan, Asmahan, Evans, Mursal and Calvin each tell their story, tracing the trajectory of their lives from homes and families in Syria, Afghanistan, Nigeria and Cameroon to the brutal refugee camps, where they are trapped in a strange and hostile world.

These are compelling, first-person stories of resilience, suffering and hope, told in a depth rarely seen in non-fiction, partly because one of the authors is a refugee himself, and partly because both authors spent years getting to know the interviewees and winning their trust. The women and men in this book tell their stories in their own words, retaining control and dignity, while revealing intimate and heartfelt scenes from their lives.

Helen Benedict, who has been writing about refugees for over ten years, is a recipient of the 2021 PEN Jean Stein Grant for Literary Oral History and the Ida B. Wells Award for Bravery in Journalism. She is the author of seven novels and six books of nonfiction, including the award-winning The Lonely Soldier: The Private War of Women Serving in Iraq, and the novel, Wolf Season. Her writing inspired both a class action suit against the Pentagon on behalf of people sexually assaulted in the military and the 2012 Oscar-nominated documentary, The Invisible War. She is a Professor of Journalism at Columbia University, New York.
Eyad Awwadawnan, formerly a law student from Damascus, Syria, is a writer and poet currently living and working in Reykjavik, Iceland. During his four years in Greece, he worked as a cultural mediator, translator and interpreter for various NGOs. He also published a featured article in Slate Magazine detailing his escape from Syria.
Charlotte Innes is the author of three poetry chapbooks, most recently Twenty Pandemicals (Kelsay Books, 2021), and a full-length book of poems, Descanso Drive (Kelsay Books, 2017). Her poems have appeared in many publications, including The Hudson Review, Rattle, The Sewanee Review, Tampa Review, Valparaiso Poetry Review and several anthologies, including The Best American Spiritual Writing for 2006 (Houghton Mifflin, 2006) and Wide Awake: Poets of Los Angeles and Beyond (Beyond Baroque Books, 2015). She is a former newspaper reporter, freelance writer and teacher, and has written on books and the arts for many publications, including The Nation and the Los Angeles Times. Originally from England, Charlotte Innes now lives in Los Angeles.
Praise for Map of Hope and Sorrow -

‘This book celebrates human resilience and the capacity for hope, serving as a powerful call for tolerance.’ – Lucy Popescu, Observer

‘Harrowing, heartbreaking and deeply humane, Map of Hope and Sorrow amplifies the dreams and struggles of refugees who fled oppression only to find themselves trapped in another kind of cage. Their voices echoed in my brain long after the final page.’ – Jessica Bruder, author of Nomadland

‘A treasure-trove of story, of heart, of humanity’s failures and achievements.’ – Kao Kalia Yang, author of The Latehomecomer

‘Map of Hope and Sorrow is not only urgent, it is riveting.’ – Jessica Goudeau, author of After the Last Border

‘At once compelling, poetic and necessary.’ – Masha Hamilton, former US Embassy envoy to Afghanistan and author of What Changes Everything

Map of Hope and Sorrow: Stories of Refugees Trapped in Greece (Paperback)