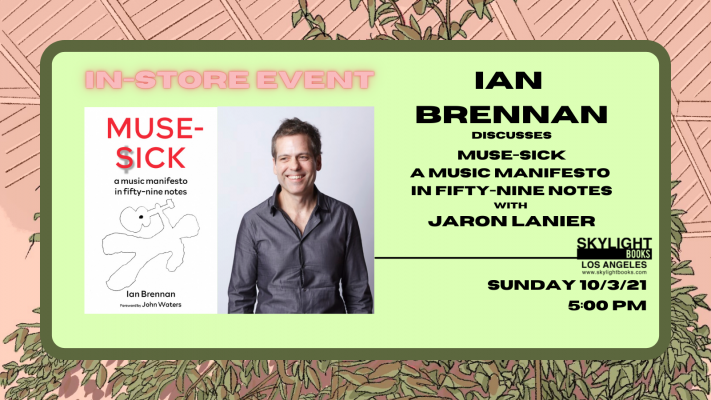 *Join us for the in-store launch of MUSE SICK, with Ian Brennan and Jaron Lanier! We ask that all attendees wear masks while they are in the store.

Grammy-winning music producer, Ian Brennan’s seventh book, Muse-Sick: a music manifesto in fifty-nine notes, acts as a primer on how mass production and commercialization have corrupted the arts. Broken down into a series of core points and actions plans, Muse-Sick is a concise and affordable pocket primer follow-up to Brennan’s two previous music missives, How Music Dies (or Lives): Field Recording and the Battle for Democracy in the Arts and Silenced by Sound: The Music Meritocracy Myth.

Popular culture has woven itself into the social fabric of our lives, penetrating people’s homes and haunting their psyche through images and earworm hooks. Justice, at most levels, is something that the average citizen might have little influence upon leaving us feeling helpless and complacent. But pop music is a neglected arena where some change can concretely occur—by exercising active and thoughtful choices to reject the low-hanging, omnipresent commercialized and pre-packaged fruit, we begin to re-balance the world, one engaged listener at a time.

In fifty-nine concise and clear points, Brennan reveals how corporate media has constricted local culture and individual creativity, leading to a lack of diversity within “diversity.” Muse-Sick’s narrative portions are driven and made corporeal via the author’s ongoing field-recording chronicles with widely disparate groups, such as the Sheltered Workshop Singers. Marilena Umuhoza Delli’s striking photographs accompany and bring to life each tale.

As John Waters says: “I didn’t think it was possible to write a shocking book about music anymore. But Brennan has.”

Ian Brennan is a Grammy-winning music producer who has produced three other Grammy-nominated albums. He is also the author of six books and has worked with the likes of filmmaker John Waters, Merle Haggard, and Green Day, amongst others. His work with international artists such as the Zomba Prison Project, Tanzania Albinism Collective, and Khmer Rouge Survivors, has been featured on the front-page of the New York Times and on an Emmy-winning 60 Minutes segment with Anderson Cooper reporting. Since 1993 he has taught violence prevention and conflict resolution around the world for such prestigious organizations as the Smithsonian, New York’s New School, Berklee College of Music, the University of London, UC Berkeley, and the National Accademia of Science (Rome).

Jaron Lanier is known as the father of virtual reality technology and has worked on the interface between computer science and medicine, physics, and neuroscience. His works include Who Owns the Future? and You Are Not a Gadget. He lives in Berkeley, California.

Praise for Muse-Sick: a music manifesto in fifty-nine notes:

“Ian Brennan‘s Muse-Sick is a passionate, thought-provoking chronicle of traveling beyond the mainstream to listen to unheard music created by the unsung.” —Professor Maureen Mahon(NYU), author of Right to Rock: The Black Rock Coalition and the Cultural Politics of Race and Black Diamond Queens: African American Women and Rock and Roll

“We can never hear enough of the fresh, conscientious perspective of Ian Brennan. His words gives voice to people who have been silenced.” —Booker T. Jones, Rock and Roll Hall of Fame inductee, Lifetime Achievement award Grammy-winner

“By all means keep this book by your bedside....” —Songlines

“Brennan is unflinching in his criticism of the commercial music industry...” —The Australian, weekend special-edition

“It’s not often that you read a book that changes the way you listen to music .... if you only read one book about music this year, I strongly recommend that you make it this one.” —Hi-Fi Choice

Who Owns the Future? (Paperback)

You Are Not a Gadget: A Manifesto (Paperback)