AT SKYLIGHT: JANELLE BROWN presents I'LL BE YOU in conversation with EDAN LEPUCKI 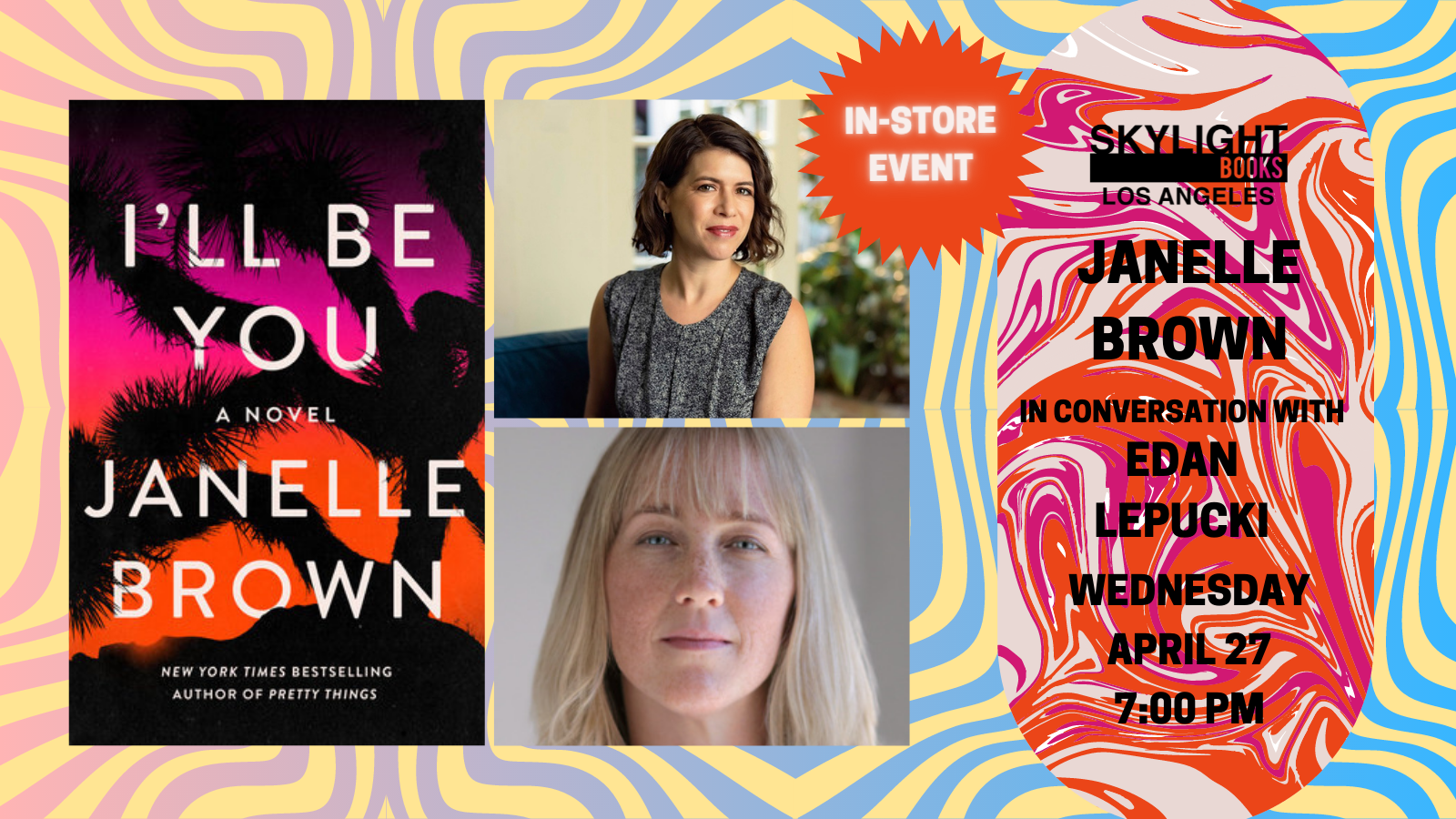 I'll Be You (Random House)

Two identical twin sisters and former child actors have grown apart—until one disappears, and the other is forced to confront the secrets they’ve kept from each other in this twisty suspense novel from the New York Times bestselling author of Pretty Things.

ONE OF THE MOST ANTICIPATED BOOKS OF 2022—PopSugar, CrimeReads

As children, Sam and Elli were two halves of a perfect whole: gorgeous identical twins whose parents sometimes couldn’t even tell them apart. They fell asleep to the sound of each other’s breath at night, holding hands in the dark. And once Hollywood discovered them, they became B-list child TV stars, often inhabiting the same role.

But as adults, their lives have splintered. After leaving acting, Elli reinvented herself as the perfect homemaker: married to a real estate lawyer, living in a house just blocks from the beach. Meanwhile, Sam has never recovered from her failed Hollywood career, or from her addiction to the pills and booze that have propped her up for the last fifteen years.

Sam hasn't spoken to her sister since her destructive behavior finally drove a wedge between them. So when her father calls out of the blue, Sam is shocked to learn that Elli’s life has been in turmoil: her husband moved out, and Elli just adopted a two-year-old girl. Now she’s stopped answering her phone and checked in to a mysterious spa in Ojai. Is her sister just decompressing, or is she in trouble? Could she have possibly joined a cult? As Sam works to connect the dots left by Elli’s baffling disappearance, she realizes that the bond between her and her sister is more complicated than she ever knew.

I’ll Be You shows Janelle Brown at the top of her game: a story packed with surprising revelations and sharp insights about the choices that define our families and our lives—and could just as easily destroy them.

Janelle Brown is the New York Times bestselling author of Pretty Things, Watch Me Disappear, All We Ever Wanted Was Everything, and This Is Where We Live. An essayist and journalist, she has written for Vogue, The New York Times, Elle, Wired, Self, Los Angeles Times, Salon, and more. She lives in Los Angeles with her husband and their two children.

Edan Lepucki is the New York Times bestselling author of the novels California and Woman No. 17, as well as the editor of Mothers Before: Stories and Portraits of Our Mothers as We Never Saw Them. Her work has appeared in the New York Times Magazine, Esquire, the Los Angeles Times, and The Cut, among other publications. She lives in Los Angeles with her family.

Praise for I'll Be You -

“Janelle Brown is a terrific storyteller and stylist, and I’ll Be You is one of those books you’ll devour. It has a hot mess of a narrator—actually two hot messes, twins—both of whom you will root for, even as you are screaming at them to get a grip. Also? The novel has more twists and turns than the canyon roads that snake up and around Los Angeles.”—Chris Bohjalian, New York Times bestselling author of The Flight Attendant and Hour of the Witch

“In Janelle Brown’s latest twisty, propulsive mystery, estranged twin sisters must confront shocking pieces of their past when one of them goes missing. From the first sentence, these women will have you in their grips. You won’t be able to put this novel down, and you won’t want to.”—Laura Dave, New York Times bestselling author of The Last Thing He Told Me

“Janelle Brown has done it again, creating a deliciously twisty page-turner you won’t be able to put down. But I’ll Be You is much more than a riveting thriller; it’s a powerful and moving portrait of the fiercely tenacious bonds of familial love. With her trademark beautiful writing, depth of emotion, and sharp insights, Brown explores the dangers that lurk behind the seductive worlds of Hollywood child stardom and self-help culture. I loved this novel.”—Angie Kim, Edgar Award–winning author of Miracle Creek

“Absolutely delicious . . . Janelle Brown is a surgeon of the complex relationships between women. I gobbled this up.”—Emma Straub, New York Times bestselling author of All Adults Here

“Bestseller Brown (Pretty Things) infuses this twist-packed mystery with an intense story of creating one’s identity, rife with deep family trauma and a low-key, creepy depiction of the dark side of twin intimacy. . . . The perfectly paced emotional reveals of the twins’ shared history pull the reader toward fierce investment in Elli’s safety and the sisters’ reconnection. Brown has upped her game with this one.”—Publishers Weekly (starred review)

I'll Be You: A Novel (Hardcover)