AT SKYLIGHT: JEN FERGUSON presents THE SUMMER OF BITTER AND SWEET with RACQUEL MARIE and HAYLEY DENNINGS 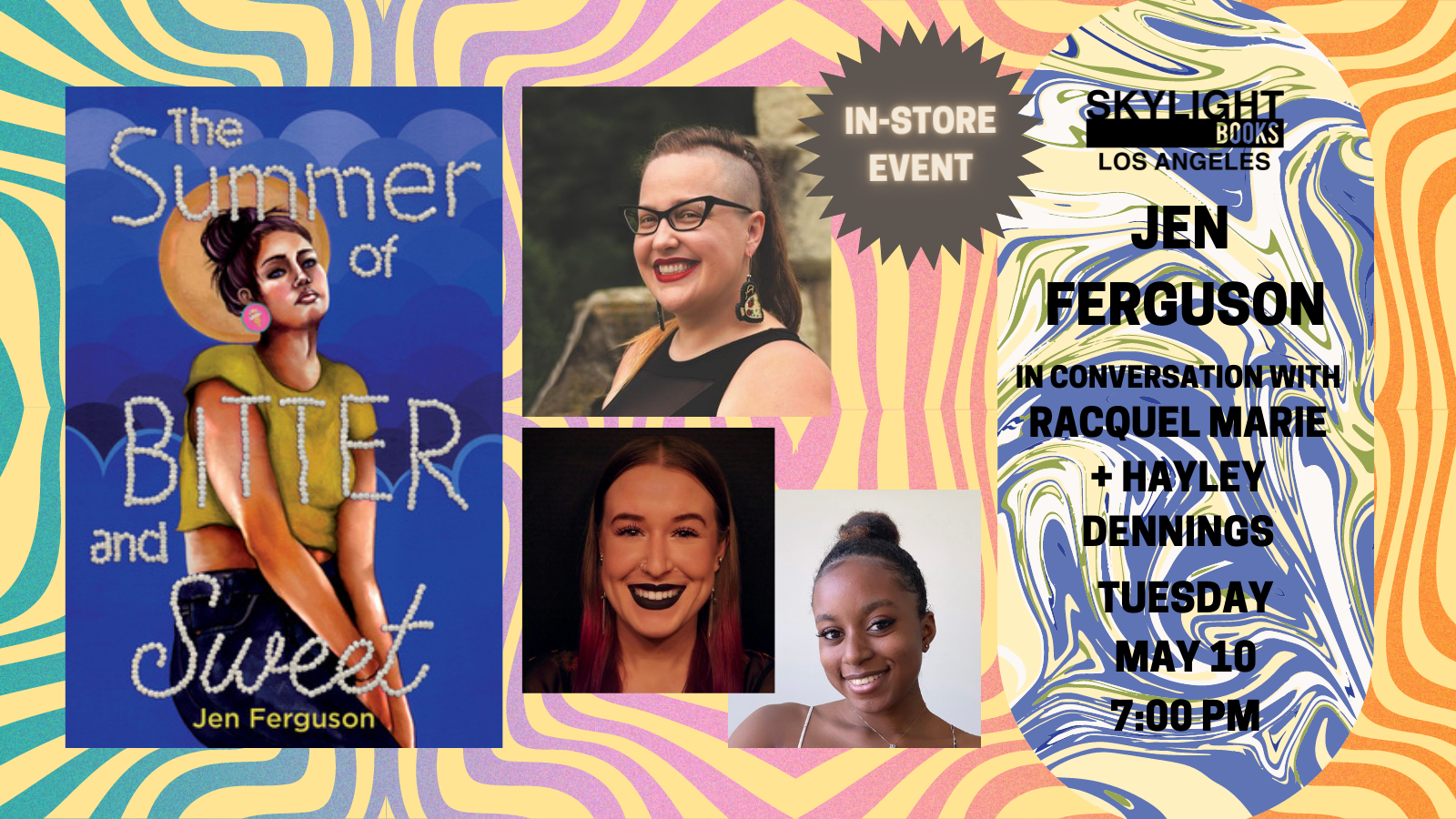 Signed preorders will include an EXCLUSIVE ART PRINT while supplies last! Order yours here!

The Summer of Bitter and Sweet (Heartdrum)

In this complex and emotionally resonant novel about a Métis girl living on the Canadian prairies, debut author Jen Ferguson serves up a powerful story about rage, secrets, and all the spectrums that make up a person—and the sweetness that can still live alongside the bitterest truth.

Lou has enough confusion in front of her this summer. She’ll be working in her family’s ice-cream shack with her newly ex-boyfriend—whose kisses never made her feel desire, only discomfort—and her former best friend, King, who is back in their Canadian prairie town after disappearing three years ago without a word.

But when she gets a letter from her biological father—a man she hoped would stay behind bars for the rest of his life—Lou immediately knows that she cannot meet him, no matter how much he insists.

While King’s friendship makes Lou feel safer and warmer than she would have thought possible, when her family’s business comes under threat, she soon realizes that she can’t ignore her father forever.

The Heartdrum imprint centers a wide range of intertribal voices, visions, and stories while welcoming all young readers, with an emphasis on the present and future of Indian Country and on the strength of young Native heroes. In partnership with We Need Diverse Books.

Jen Ferguson (she/her) is Métis and white, an activist, a feminist, an auntie, and an accomplice armed with a PhD in English and Creative Writing. She believes writing, teaching and beading are political acts. The Summer of Bitter and Sweet is her debut YA novel.

Racquel Marie grew up in Southern California where her passion for storytelling of all kinds was encouraged by her friends and big family. She received a B.A. in English with an emphasis in Creative Writing and a minor in Gender and Sexuality Studies from the University of California, Irvine. Racquel primarily writes YA contemporaries starring queer Latine characters like herself. When not writing or reading, she loves practicing beauty and special effects makeup, watching and producing YouTube videos, and teaching herself to play ukulele in spite of her extremely long nails. She is the author of Ophelia After All and You Don't Have a Shot.

Hayley Dennings is a writer from the Bay Area in California. While finishing her French and English undergraduate degree from Loyola Marymount University, she also spends time on her YouTube channel, Pages of Hayley, where she discusses books and writing with over 30,000 subscribers. Seeing people like her represented in books encouraged her to write her own books and pursue publishing. When Hayley is not working, she is spending time with her dogs and baking.

Praise for The Summer of Bitter and Sweet -

"Debut author Ferguson, who is Métis and White, touches on intergenerational family suffering at the hands of the state, mental health, substance abuse, racism, sexual harassment and assault, and missing and murdered Indigenous women—all with nuance and care. Heart-rending and healing; a winning blend that will leave readers satisfied."
— Kirkus Reviews (starred review)

The Summer of Bitter and Sweet (Hardcover)