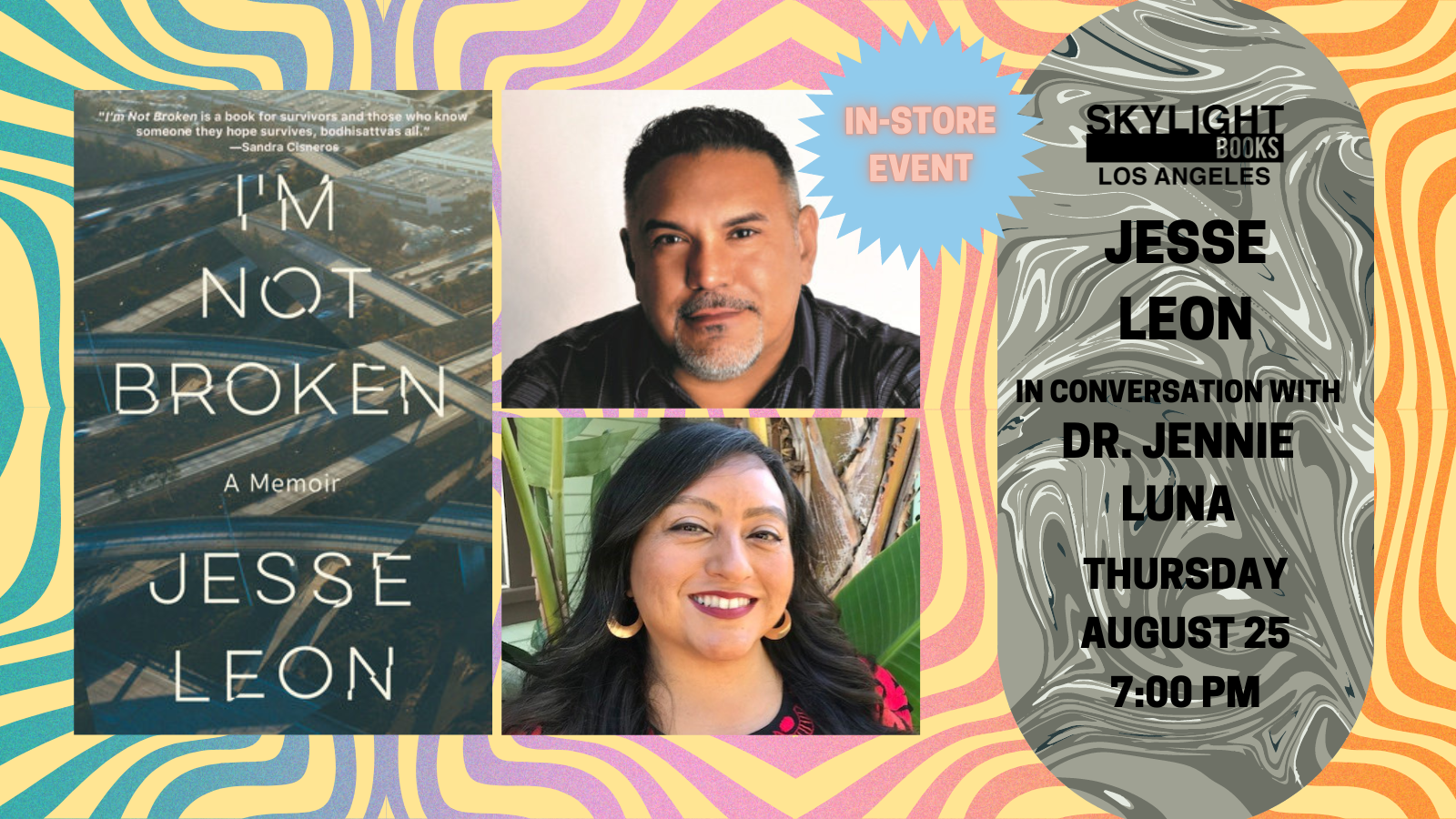 I'm Not Broken: A Memoir (Vintage)

In this unflinching and inspiring memoir, Jesse Leon tells an extraordinary story of resilience and survival, shining a light on a childhood spent devastated by sex trafficking, street life, and substance abuse.

Born to indigenous working-class Mexican immigrants in San Diego in the 1970s, Jesse Leon’s childhood was violently ruptured. A dangerous and harrowing encounter at a local gift shop when he was eleven years old left Jesse with a deadly secret. Hurt, alone, and scared for his life, Jesse numbed his pain by losing himself in the hyper-masculine culture of the streets and wherever else he could find it—in alcohol, drugs, and prostitution. Overlooked by state-sanctioned institutions and systems intended to help victims of abuse, neglected like many other low-income Latinos, Jesse spiraled into cycles of suicide and substance abuse.

I’m Not Broken is the heartbreaking and remarkable story of the journey Jesse takes to win back his life, leading him to the steps of Harvard University. From being the lone young person of color in Narcotics Anonymous meetings to coming to terms with his own sexual identity, to becoming an engaged mentor for incarcerated youth, Jesse finds the will to live with the love and support of his family, friends, and mentors. Recounting the extraordinary circumstances of his life, Jesse offers a powerful, raw testament to the possibilities of self-transformation and self-acceptance. Unforgettable, I’m Not Broken is an inspirational portrait of one young man’s indomitable strength and spirit to survive—against all possible odds.

Jesse Leon is a social-impact consultant to foundations, impact investors, non-profits, and real estate developers on ways to address issues of substance abuse, affordable housing, and educational opportunities for at-risk youth. Since receiving a master’s degree from the Harvard Kennedy School, Jesse has managed multi-million dollar philanthropic grantmaking for various foundations and banking institutions, managed over $1B in public sector investments for affordable housing, and built thousands of units of mixed-income housing as a real estate developer for Bank of America. Jesse recently moved back to San Diego to be closer to his mother and to pursue his dream of publishing this book. He is a native Spanish speaker and fluent in English and Portuguese.

Dr. Jennie Luna was born and raised in East San José, California. Grandaughter/daughter of migrant farm workers and cannery workers, she is first in her family to attend and graduate college. She received her undergraduate degree in Chicana/o Studies and Mass Communications from U.C. Berkeley, a Master’s in Education from Teachers College, Columbia University, and an M.A. and Ph.D. in Native American Studies from U.C. Davis. She is currently an Associate Professor in Chicana/o Studies at California State University, Channel Islands. Dr. Luna’s research focuses on the contemporary history and diaspora of Danza Mexica/Azteca tradition and its impact on Xicana Indígena identity, culture, and spirituality. As a danzactivist-scholar, Dr. Luna incorporates Nahuatl language study, decolonial scholarship, Indigeneity, Xicana spiritualities, traditional birthing methods, reproductive justice, and Indigenous food and healing practices. She has authored chapters in the following books: Voices from the Ancestors: Xicanx and Latinx Spiritual Expressions and Healing Practices and Decolonizing Latinx Masculinities, both published out of The University of Arizona Press.

Praise for I'm Not Broken -

"I’m Not Broken is a book for survivors and those who know someone they hope survives, bodhisattvas all."   —Sandra Cisneros

“A book detailing Mr. Leon’s battles against unparalleled circumstances, from poverty to addiction to assault, can be at once a critical look at the ways in which we fail young people in our communities and also a story of how, by the grace of God, we find in our midst a man like Jesse Leon, making sacrifices so that others might not suffer.” —Tarell Alvin McCraney, Academy Award winner for Moonlight

“This emotionally unyielding memoir recounts a life lived with no shortage of harrowing experiences, but also a life renewed thanks to a profound inner strength and an unrelenting determination to overcome.” —Darren Walker, President of the Ford Foundation

“I'm Not Broken is a powerful reminder that the human spirit can truly be resilient when it's fed by faith, love and hope.” —Pedro Noguera, Dean of the University of Southern California’s Rossier School of Education

"A raw, emotional memoir filled with highs and lows. The inspirational ending gives readers hope when Leon uses his self-will and determination to change and accept the love from those around him." —Library Journal, starred review

I'm Not Broken: A Memoir (Paperback)