AT SKYLIGHT: KATE GALE in conversation with KIM DOWER and ELOISE KLEIN HEALY 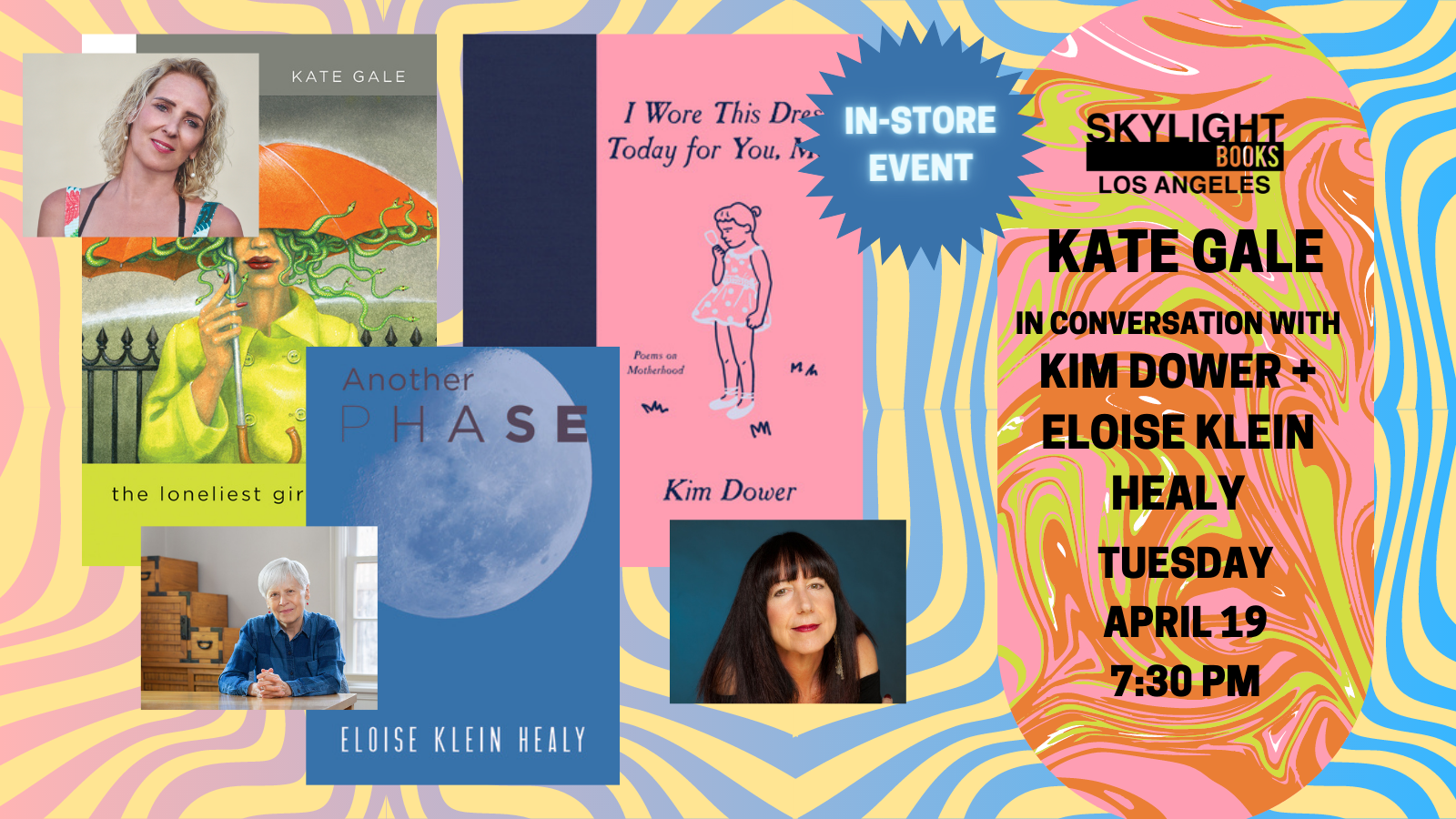 Who was more alone than Medusa? Raped in Athena's temple, transformed into a monster, and banished into a cave, Medusa may be the ultimate example of victim blaming. In The Loneliest Girl, Kate Gale creates a powerful alternative narrative for Medusa and for all women who have carried guilt and shame--for being a woman, for not being enough, for being a victim. She offers a narrative in which women are the makers of the world--in which women find their way out from the cave of the Cisthene and into a world where they determine their own destiny.

Kate Gale is the co-founder and Managing Editor of Red Hen Press. She is the author of seven books of poetry and six librettos. She teaches publishing at Chapman and creative writing at the graduate program and the low residency program of the University of Nebraska Omaha.

I Wore This Dress For You Mom (Red Hen Press)

Kim Dower's poetry has been described by the Los Angeles Times as "sensual and evocative . . . seamlessly combining humor and heartache," and by O Magazine as "unexpected and sublime." Acclaimed for combining the accessible and profound, her poems about motherhood are some of her most moving and disarmingly candid. I Wore This Dress Today for You, Mom is an anthology of her poems on being a mother--childbirth to empty nest--as well as being a daughter with all the teenaged messiness, drama and conflict, to finally caring for one's mother suffering from dementia. Culled from her four collections as well as a selection of new work, these poems, heartbreaking, funny, surprising, and touching, explore the quirky, unexpected observations, and bittersweet moments mothers and daughters share. These evocative poems do not glorify mothers, but rather look under the hood of motherhood and explore the deep crevices and emotions of these impenetrable relationships: the love, despair, joy, humor and gratitude that fills our lives.

Kim Dower, City Poet Laureate of West Hollywood from October 2016–October 2018, and originally from New York City, has published four collections of poetry: Air Kissing on Mars, her first—“sensual and evocative . . . seamlessly combining humor and heartache,” Los Angeles Times—was chosen as one of the few poetry books to be honored by the state of California and is on display at the Governor’s Mansion; Slice of Moon, “unexpected and sublime,” O Magazine; Last Train to the Missing Planet, “poems that speak about the gray space between tragedy and tenderness, memory and loss, fragility and perseverance,” Richard Blanco; and Sunbathing on Tyrone Power’s Grave, which won the Gold Ippy Award for best poetry book from an indie press in 2019. Her poems are included in several anthologies, notably, Wide Awake: Poets of Los Angeles and Beyond, (Beyond Baroque Books/Pacific Coast Poetry Series). She teaches workshops for Antioch University, UCLA Writer’s Extension, and the West Hollywood Library. Additionally, Kim’s literary publicity company, Kim-from-L.A., helps authors around the country get the word out about their wonderful books.

In April 2013, just five months after being named the first Poet Laureate of Los Angeles, Eloise had a brain injury resulting in Wernicke's aphasia--a breakdown in the symbol system of language. Poetry was the guide and motivation for recovery. This collection is comprised of a series of five-line poems that began as a focusing exercise yet transformed into a remarkable channel for her creativity. These poems are filled with the same features that have pervaded her work, meaning they are serious, at times playful, sometimes beautiful and sometimes "goofy." But all have that twist, that meaningful point, that is unique to Eloise's consciousness.

Eloise Klein Healy is the author of nine books of poetry and three chapbooks, was named the first Poet Laureate of Los Angeles in 2012. She was the founding chair of the MFA in Creative Writing Program at Antioch University Los Angeles, where she is Distinguished Professor of Creative Writing Emerita. Healy directed the Women’s Studies Program at California State University Northridge and taught in the Feminist Studio Workshop at The Woman’s Building in Los Angeles. She is the founding editor of Arktoi Books, an imprint of Red Hen Press specializing in the work of lesbian authors. A Wild Surmise: New & Selected Poems & Recordings was published in 2013 and Another Phase in 2018.

I Wore This Dress Today for You, Mom (Hardcover)