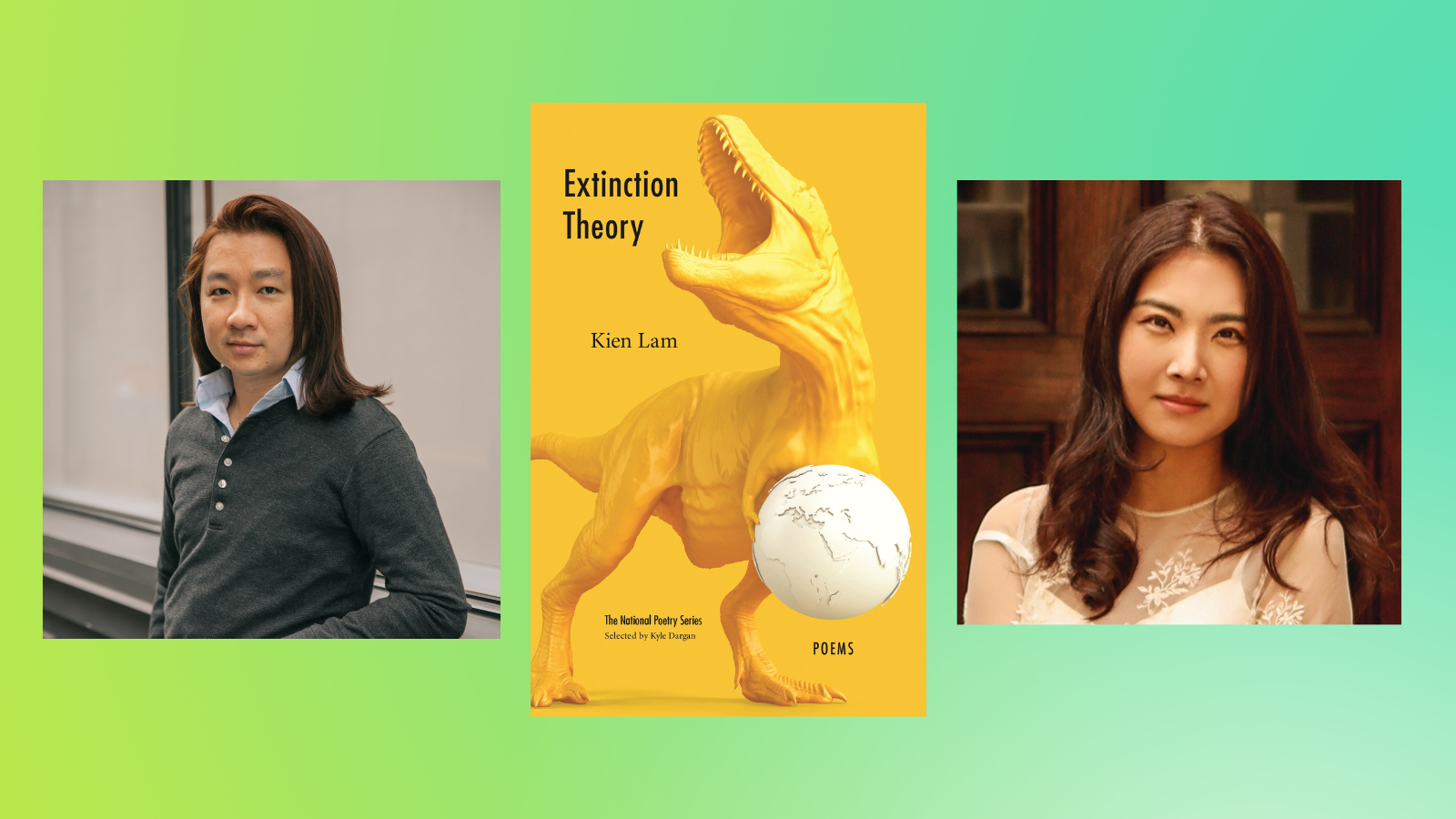 Extinction Theory is a collection of pseudoscience poems that try to provide rationales for some of life's most salient mysteries. Where is God? What does it mean to belong? Who killed the dinosaurs? Kien Lam creates new worlds with new rules to better answer these perennial questions. His poetry is that of discovery, of looking at the world as if for the first time. Lam exposes the transitory and transcendent nature of things and how we find meaning.

At the heart of this collection is also a cataloging of the smaller "extinctions" in life. Every passing moment is the death of something, and try as we might to recreate the feeling, it can never be the same. Maybe it's a relationship. Maybe it's a donut. It changes its shape as we juxtapose it against something new. Extinction Theory is as much about language as it is about the absence of language. Of English, of Vietnamese, and then of neither.

Kien Lam is the author of EXTINCTION THEORY (University of Georgia Press), winner of the 2021 National Poetry Series. He is a Kundiman fellow and received his MFA from Indiana University. Poems have appeared in Poetry, The New Republic, The Nation, and elsewhere. He lives in Los Angeles and works in gaming and television.

Emily Jungmin Yoon is the author of A Cruelty Special to Our Species (Ecco, 2018), winner of the 2019 Devil’s Kitchen Reading Award and finalist for the 2020 Kate Tufts Discovery Award, and Ordinary Misfortunes (Tupelo Press, 2017), winner of the Sunken Garden Chapbook Prize. She has also translated and edited a chapbook of poems, Against Healing: Nine Korean Poets (Tilted Axis, 2019). She has accepted awards and fellowships from the Poetry Foundation and Bread Loaf Writers’ Conference, among others. Yoon currently serves as the Poetry Editor for The Margins, the digital magazine of the Asian American Writers’ Workshop, and as the Abigail Rebecca Cohen Postdoctoral Scholar at the University of Chicago.

This book of theories, songs, mantras, and more-threaded through with flourishes of compassion for a father finding himself and maybe pathos for a mother who served as tether post for a speaker dizzied by colonizing language and the god it claimed to represent-it impels us to think hard about the word made flesh, or our existential fear made music, or the cultural alienation that doesn't transmute into anything and persists as a foreign object lodged in the tongue. 'Life is a series/ of extinctions'-excisions. Each time I read this collection, I think it pierced me for a different reason. In that way, all those edges, these lyrics are scalpels Kien Lam wields with an awareness that when one has something so sharp, they need not to press heavily to slice deep. — Kyle Dargan, author of Honest Engine: Poems

Kien Lam's poems are live wires, coursing with currents of feverish sonic play and bracing truths. Poem after poem, Extinction Theory tears out the root of the single origin story-and along with it, any overriding theory on love, masculinity, assimilation, disappearing fathers, exile-to find origins and the dense threads of meaning scattered everywhere. Across mesmeric pages, we have an insistence on the freedoms of multiplicity, that which morphs appetite into ache, rendering the subjects of these poems 'the kind of shape that changes when touched.' Lam's unmatched powers of associative leaping and wild invention lead us, insight after insight, into life's most tragicomic moments. This is an extraordinary collection on the marvels of shape-shifting and strange new origins. — Jenny Xie, author of Eye Level: Poems

Kien Lam's Extinction Theory is a beautiful, probing collection that develops its own creation stories that end in the grieving of one kind of life in favor of another. It asks existential questions about what it means to be the child of Vietnamese immigrants, wondering about love and belonging, place, and passage. It asks questions of God. Deft with word play and pathos and a biting wit, Lam's writing is capacious and masterful. This is an extraordinary collection of poems: deeply intelligent and full of inquiry. — Cathy Linh Che, author of Split

Every once in a while, a poet changes the game up and writes a book that goes past narrative or lyric and into a realm of immaculate extravagance and wonder. Kien Lam's stunning debut, Extinction Theory, is one of those books. His is a singular voice, one that is telling us we better stand up and pay attention. — Adrian Matejka, author of Somebody Else Sold the World

Kien Lam's beautiful, perplexed, shit-talking, heartbroken, chatty, weird, veering, wonderful (i.e., full of wonder), insolently syntaxed poems in Extinction Theory are like missives-sometimes speculative or fantastical; sometimes close as cigarette smoke-tethering loss and love, mourning and rebirth, regret and dream, rage and unadorned sorrow. This book is a true feat of the loving, yearning, capacious imagination. This is a book you will not soon forget. — Ross Gay, author of The Book of Delights