AT SKYLIGHT: MATHEW KLICKSTEIN signs SEE YOU AT SAN DIEGO 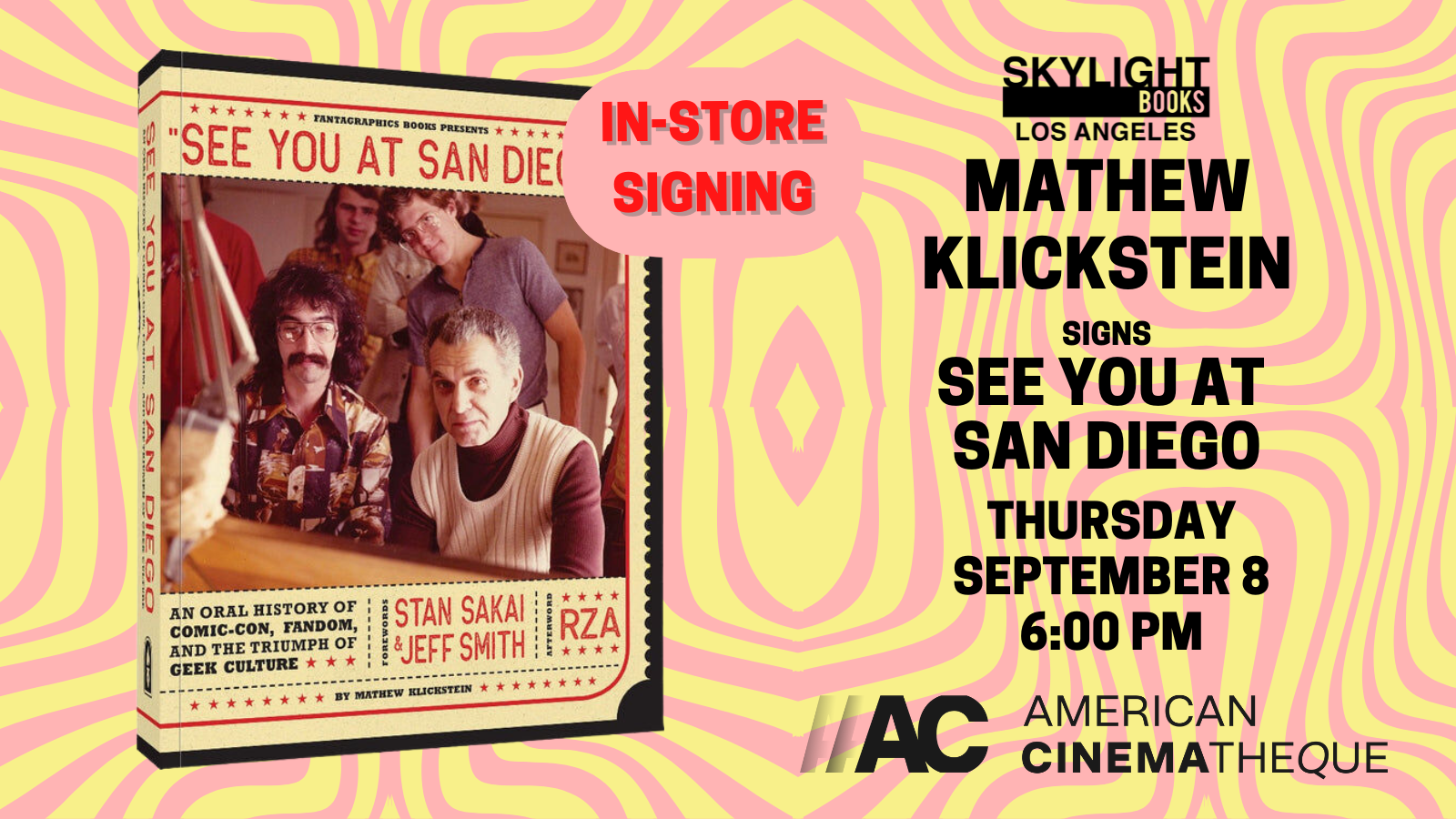 Join us in-store for a signing with Mathew Klickstein for his new book SEE YOU AT SAN DIEGO at 6:00 PM in the Arts Annex before a special screening of SCOTT PILGRIM VS. THE WORLD at American Cinematheque!

See You At San Diego: An Oral History of Comic-Con, Fandom, and the Triumph of Geek Culture (Fantagraphics)

A comprehensive chronicle of Comic-Con International and modern geekdom itself as told through countless intimate, hilarious, and often-thought provoking stories by nearly fifty of the most integral members of today’s convention and fandom community.

See You At San Diego is the comprehensive chronicle of Comic-Con International and modern geekdom itself as told through countless stories by nearly fifty of the most integral members of the Comic-Con and fandom scene. This full-fledged oral history, bursting with intimate reflections, hilarious observations, and at times, heartbreaking, often thought-provoking stories, is about how the geek at last inherited the earth and the story of the transformation of mainstream American pop culture into comic book culture over the past century.

Join some of the biggest names in fandom as they launch off at ludicrous speed into the spiraling galaxy of geek culture through the kaleidoscopic lens of the planet’s biggest pop culture gathering worldwide (clocked twice by Guinness!): the San Diego Comic-Con. With such special guests as: Neil Gaiman, Frank Miller, Kevin Smith, Bruce Campbell, Felicia Day, Scott Aukerman, Stan Sakai, Sergio Aragonés, Trina Robbins, the Russo Bros., Lloyd Kaufman, Tim Seeley, Kevin Eastman, and many others — along with 400+ photos and art — the book also features forewords by Stan Sakai (Usagi Yojimbo) and by Jeff Smith (Bone), plus an afterword by Wu-Tang Clan’s own uber-nerd mastermind RZA.

Mathew Klickstein is a prominent pop culture historian, having penned such books as: SLIMED! An Oral History of Nickelodeon's Golden Age; Springfield Confidential: Jokes, Secrets, and Outright Lies from a Lifetime Writing for The Simpsons (w/ original series writer Mike Reiss); and Selling Nostalgia: A Neurotic Novel. A longtime journalist, documentary filmmaker, television producer, playwright, podcaster, and novelist, Klickstein also recently dipped his toe in the comic book creation realm with his series You Are Obsolete. His six-part audio documentary Comic-Con Begins, in partnership with SiriusXM/Stitcher, is available on all audio platforms (www.MathewKlickstein.com) and now expanded in a visually-explosive book form as See You At San Diego (2022). He lives in Dayton, OH.

Praise for See You in San Diego -

"These wild and wooly origin stories of San Diego Comic-Con and fandom take us back to the thrilling days of yesteryear, before the crowds and lines, before Hall H and Hollywood celebrities, before the endless summer of superhero box office blockbusters, to the halcyon days of the early 1970s when San Diego Comic-Con was the ramshackle creation of first-generation fans, teenagers, and stoners. All of this makes for a colorful oral history, especially from the mouths of the people who lived it firsthand." — Rob Salkowitz (journalist, Forbes; author, Comic-Con and the Business of Pop Culture)

"The rambunctious, delicious story of how the biggest pop culture event in history was born – and grew from nothing to everything." — Allen Salkin (journalist, Los Angeles Magazine; bestselling author, From Scratch: The Uncensored History of the Food Network)

"Mathew Klickstein might be the geek guru of the 21st century." — Mark Mothersbaugh

"Finally! An unexpurgated history of Comic-Con and fandom that comes directly from the horse's mouth – actually a whole herd of horses. The overall result is as pleasantly chaotic as the Con itself. What a relief!" — Scott Shaw! (cartoonist; Comic-Con co-originator)

See You At San Diego: An Oral History of Comic-Con, Fandom, and the Triumph of Geek Culture (Paperback)