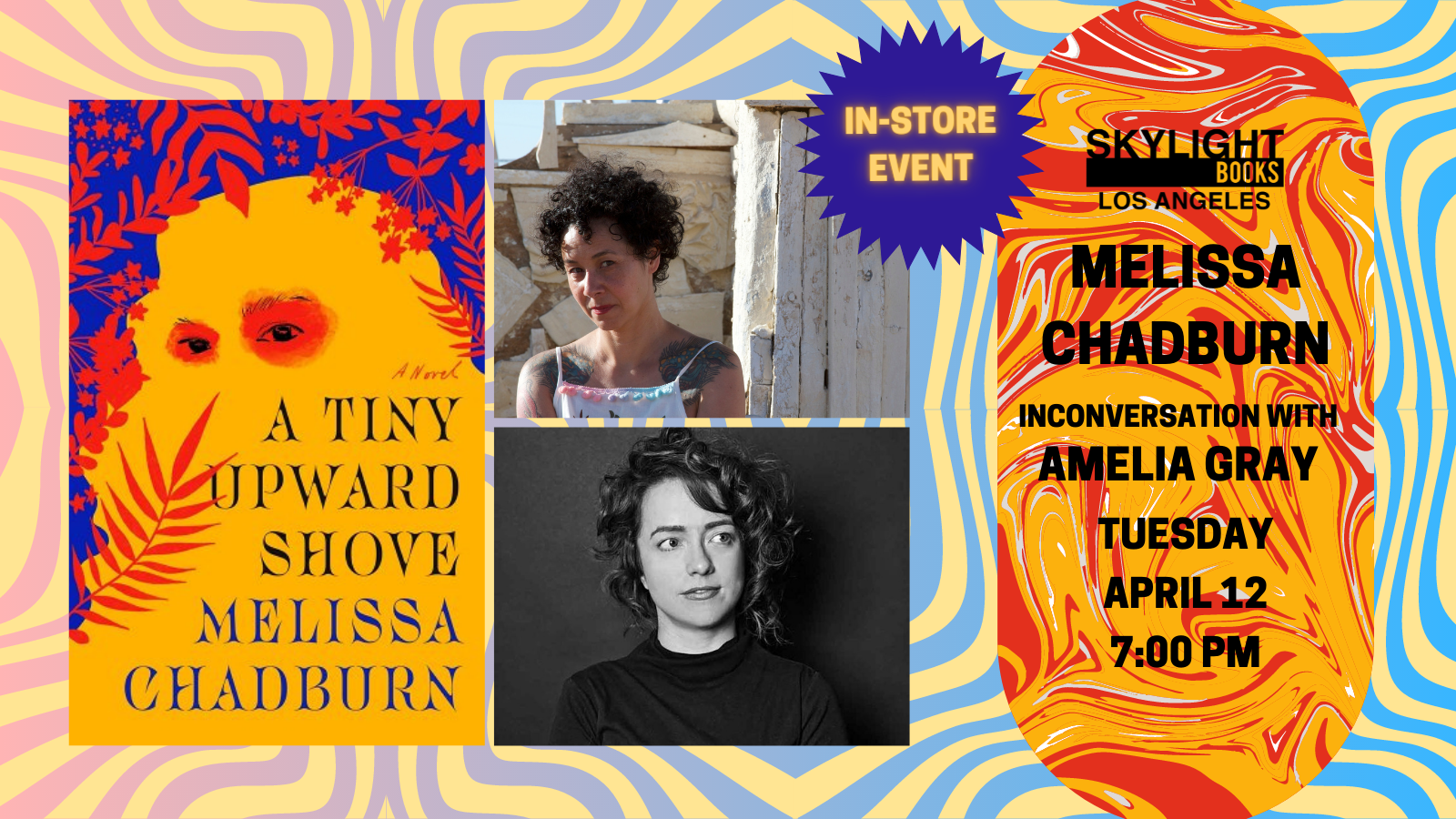 “Addictive and headlong” (Lauren Groff), A Tiny Upward Shove is inspired by Melissa Chadburn's Filipino heritage and its folklore, as it traces the too-short life of a young, cast-off woman transformed by death into an agent of justice—or mercy.

Marina Salles’s life does not end the day she wakes up dead.

Instead, in the course of a moment, she is transformed into the stuff of myth, the stuff of her grandmother’s old Filipino stories—an aswang, a creature of mystery and vengeance. She spent her time on earth on the margins; shot like a pinball through a childhood of loss, she was a veteran of Child Protective Services and a survivor, but always reacting, watching from a distance, understanding very little of her own life, let alone the lives of others. Death brings her into the hearts and minds of those she has known—even her killer—as she accesses their memories and sees anew the meaning of her own. In her nine days as an aswang, while she considers whether to exact vengeance on her killer, she also traces back, finally able to see what led these two lost souls to a crushingly inevitable conclusion.

In A Tiny Upward Shove, the debut novelist Melissa Chadburn charts the heartbreaking journeys of two of society’s castoffs as they make their way to each other and their roles as criminal and victim. What does it mean to be on the brink? When are those moments that change not only our lives but our very selves? And how, in this impossible world, full of cruelty and negligence, can we rouse ourselves toward mercy?

Melissa Chadburn’s writing has appeared in The Los Angeles Times, The New York Times Book Review, The New York Review of Books, The Paris Review Daily, The Best American Food Writing, and many other publications. Her extensive reporting on the child welfare system appears in the Netflix docuseries The Trials of Gabriel Fernandez. Melissa is a worker lover and through her own labor and literary citizenship strives to upend economic violence. Her mother taught her how to sharpen a pencil with a knife and she's basically been doing that ever since. She is a Ph.D. candidate in Creative Writing at the University of Southern California and lives in greater Los Angeles.

Amelia Gray is the author of five books, most recently Isadora (FSG). Her fiction and essays have appeared in The New Yorker, The New York Times, The Wall Street Journal, Tin House, and VICE. She is a winner of the NYPL Young Lions Fiction Award and of FC2's Ronald Sukenick Innovative Fiction Prize, and a finalist for a WGA Award and the PEN/Faulkner Award for Fiction. As a screenwriter, she has written for the shows Maniac (Netflix), Mr. Robot (USA), and Gaslit (Starz), as well as the games Telling Lies (Annapurna Interactive) and Immortality (Half Mermaid). She lives in Los Angeles.

Praise for A Tiny Upward Shove -

A Most Anticipated Book of 2022: The Millions, Ms., Electric Lit

“A Tiny Upward Shove is gloriously voiced, the kind of addictive and headlong novel that makes reading into a wild bronco ride. Melissa Chadburn has it, the spark; her first novel is strange and tender and not to be missed.”
—Lauren Groff, author of Matrix

“A beautiful and brave novel about powerlessness, longing, and that universal, unavoidable desire to be loved. Let this book happen to you.”
—Edan Lepucki, author of If You’re Not Yet Like Me

“A novel that grabs your attention and won’t let it go—fueled by a wild, jagged energy and an exuberant mixing of cultures and a narrator whose frank, poignant voice will keep echoing in your head.”
—Sarah Shun-lien Bynum, author of Likes

“In its verve, vibrancy, and sheer reckless energy, Chadburn’s writing recalls a number of wonders: Ondaatje’s Running in the Family, say, or Kincaid’s At the Bottom of the River. Chadburn’s vision, however, her intelligence and empathy, are entirely her own.”
—Matthew Specktor, author of American Dream Machine

“An engrossingly raw but tenderly vulnerable voice. Chadburn brings to vivid life a character stained by cruelty, but who has the last word.”
—Lisa Ling, coauthor of Somewhere Inside

“A writer who can make the language sing and bleed.”
—Steve Almond, author of The Evil B.B. Chow and Other Stories

“A mesmerizing work in which beauty and ugliness and realism and mythology coexist. Chadburn is an emerging literary force.”
—Jaquira Díaz, author of Ordinary Girls

“Gorgeous, wrecking. I could not look away. Her telling held me captive and reminded me that art is its own kind of mercy.”
—Melissa Febos, author of Girlhood

“A knife pressed to the throat of secrecy. There is no other debut novelist whose work I’m more excited to share with everyone in the world.”
—Kyle Minor, author of Praying Drunk

“An astonishing story about what makes us human and bound to each other. More books should be written like this: fiercely, without apology, and with devastating honesty.”
—Dana Johnson, author of Elsewhere, California

“An extraordinary book with surprising turns and fierce momentum. This book is alive, and you can feel its heart beating; when you read its pages, I promise you will feel its life rush through you.”
—Jennifer Percy, author of Demon Camp

“Chadburn leans into the center of a bad dream. Go with her. Keep going.”
—Sia