AT SKYLIGHT: NATASHIA DEÓN launches her novel THE PERISHING 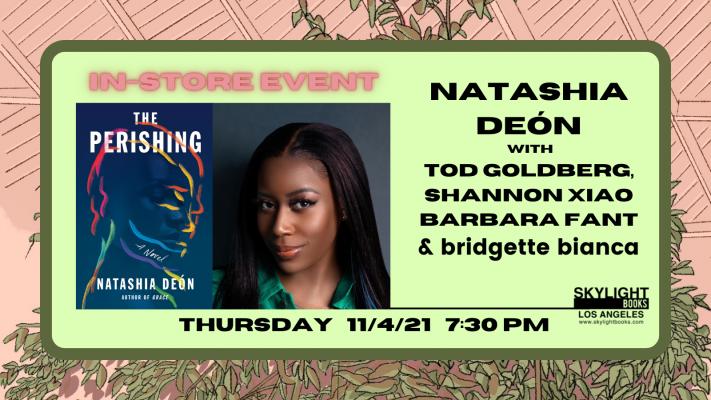 A Black immortal in 1930’s Los Angeles must recover the memory of her past in order to save the world in this extraordinarily affecting novel for readers of N. K. Jemisin and Octavia E. Butler.

Lou, a young Black woman, wakes up in an alley in 1930s Los Angeles, nearly naked and with no memory of how she got there or where she’s from, only a fleeting sense that this isn’t the first time she’s found herself in similar circumstances. Taken in by a caring foster family, Lou dedicates herself to her education while trying to put her mysterious origins behind her. She’ll go on to become the first Black female journalist at the Los Angeles Times, but Lou’s extraordinary life is about to become even more remarkable. When she befriends a firefighter at a downtown boxing gym, Lou is shocked to realize that though she has no memory of ever meeting him she’s been drawing his face since her days in foster care.

Increasingly certain that their paths have previously crossed—perhaps even in a past life–and coupled with unexplainable flashes from different times that have been haunting her dreams, Lou begins to believe she may be an immortal sent to this place and time for a very important reason, one that only others like her will be able to explain. Relying on her journalistic training and with the help of her friends, Lou sets out to investigate the mystery of her existence and make sense of the jumble of lifetimes calling to her from throughout the ages before her time runs out for good.

Set against the rich historical landscape of Depression-era Los Angeles, The Perishing charts a course through a changing city confronting racism, poverty, and the drumbeat of a coming war for one miraculous woman whose fate is inextricably linked to the city she comes to call home.

Natashia Deón is an NAACP Image Award Nominee, practicing criminal attorney, and college professor. A Pamela Krasney Moral Courage Fellow, Deón is the author of the critically acclaimed debut novel, Grace, which was named a Best Book by The New York Times. Deón has been awarded fellowships by PEN America, Prague Summer Program for Writers, Dickinson House in Belgium, the Bread Loaf Writers’ Conference, and the Virginia Center for the Creative Arts.

Praise for The Perishing:

“The Perishing . . . plays like its own genre—lyrical strangeness.” —Christopher Borelli, Chicago Tribune

“An intoxicating blend of sci-fi and historical fiction, The Perishing is a unique perspective on Depression-era life for a Black woman, time traveler or not.” —Kirby Beaton, BuzzFeed

“This marriage of period lit and science fiction will plug the Lovecraft Country sized hole in your heart.” —Keyaira Boone, Essence

“Natashia Deón’s critically acclaimed debut novel, Grace, ushered in a brand-new literary talent whose fans have been waiting five long years to see what she would do next. It’s clear within the first few pages of her new novel, The Perishing, that the wait has been well worth it . . . The Perishing is a downright masterpiece. Welcome to the world of literary stardom, Natashia Deón.” —Scott Neumyer, Shondaland

“Who are we, if not the sum of our experiences? If the body keeps score, how is history written on our flesh? Natashia Deón’s time-bending novel, The Perishing, artfully considers these questions and more . . . Deón’s cultural observations are as sharp and arresting as her use of descriptive language. Physical places, like people, have character, distinct features that speak to the life (or lack thereof) within . . . The Perishing is not a novel that’s largely preoccupied with the physical mechanics of time travel. Instead, time travel is a device used to examine philosophical questions that are embedded in mankind’s search for meaning. —Vanessa Willoughby, Literary Hub

“This isn’t a book. It’s a touchstone. It’s an oracle. It’s a mirror in which you will see your authentic self, reflected on the pages. The Perishing is one part lyrical mystery, one part history lesson you didn’t learn in school, one part time machine. It’s a lush, genre-smashing, philosophical experience of a novel that blew my mind even as it broke my heart.” —Jamie Ford, New York Times bestselling author of Hotel on the Corner of Bitter and Sweet

“Remarkable, strange, and richly inventive, Natashia Deón’s The Perishing will keep you up all night and haunt you long afterward. Deón’s newest novel is a wonder and a feat.” —R.O. Kwon, author of The Incendiaries

“I loved traveling through Natashia Deon’s haunting vision of our intertwined past and future; her gaze is both unflinching and deeply compassionate, the truest view of humanity in our everlasting present.” —Jade Chang, author of The Wangs vs. the World

“For a second time, Deón has proven herself a magnificent, artful storyteller. The Perishing is by turns mysterious, heartbreaking, and inspiring. I love this novel and its courageous protagonist.” —De’Shawn Charles Winslow, author of In West Mills