AT SKYLIGHT: RAX KING in conversation with MILES KLEE 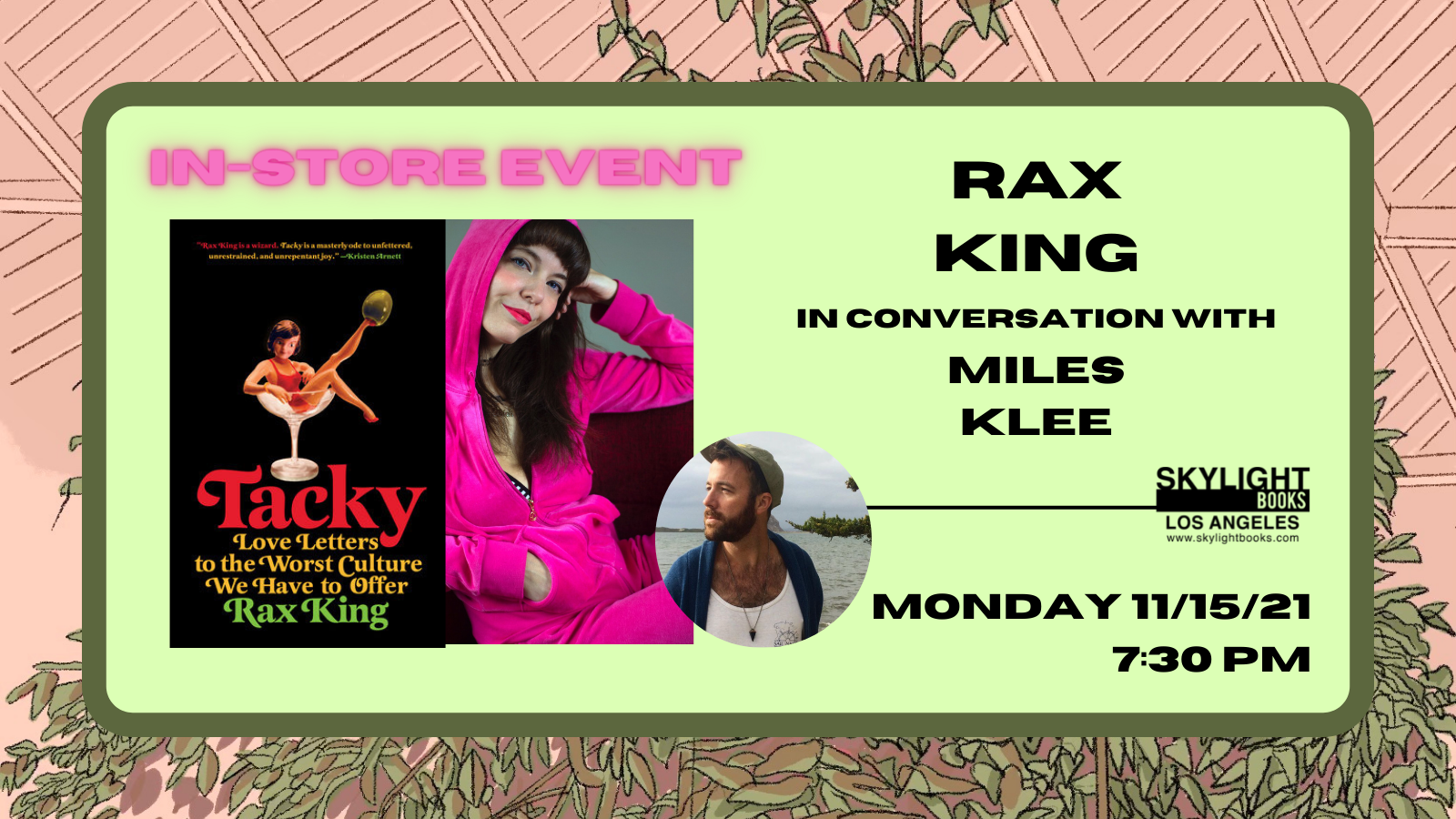 Tacky: Love Letters to the Worst Culture We Have to Offer (Vintage)

An irreverent and charming debut essay collection about the joys of low pop culture and bad taste, exploring coming of age in the 2000s in the age of Hot Topic, Creed, and frosted lip gloss—from the James Beard Award-nominated writer of the Catapult column “Store-Bought Is Fine”

Tacky is about the power of pop culture—like any art—to imprint itself on our lives and shape our experiences, no matter one’s commitment to “good” taste. These fourteen essays are a nostalgia-soaked antidote to the millennial generation’s obsession with irony, putting the aesthetics we hate to love—snakeskin pants, Sex and the City, Cheesecake Factory’s gargantuan menu—into kinder and sharper perspective.

Each essay revolves around a different maligned (and yet, Rax would argue, vital) cultural artifact, providing thoughtful, even romantic meditations on desire, love, and the power of nostalgia. An essay about the gym-tan-laundry exuberance of Jersey Shore morphs into an excavation of grief over the death of her father; in “You Wanna Be On Top,” Rax writes about friendship and early aughts girlhood; in another, Guy Fieri helps her heal from an abusive relationship.

The result is a collection that captures the personal and generational experience of finding joy in caring just a little too much with clarity, heartfelt honesty, and Rax King’s trademark humor.

Rax King is a James Beard award-nominated writer and host of the podcast Low Culture Boil. Her writing can be found in Glamour, MEL Magazine, Catapult, and elsewhere. She lives in Brooklyn, NY with her hedgehog and toothless Pekingese.

Miles Klee is a Senior Staff Writer at MEL Magazine, where he covers masculinity in the 21st century (and memes). He's also the author of the novel Ivyland and the story collection True False. You can read his dumb posts on Twitter and subscribe to his silly newsletter, Miles High Club. He lives in LA for its tank top weather.

Tacky is a Trojan horse of a book—it’ll charge into your life with acute, laugh-out-loud observations, then leave you crying about the Cheesecake Factory. Prepare accordingly.”—Esquire’s “The Best Books of Fall 2021”

“Tacky is a very funny book. Not just funny, I mean, SERIOUSLY FUNNY. King has the power to trick you into thinking you’ve got the joke all figured out, then suddenly reveals that you’re going to experience a wealth of tender, thought-provoking emotions and guess what? You’re gonna like it! On the sentence level, King’s a wizard; she’s able to wring the last drops of cool and sweet and sexy out of every moment. This isn’t a book you read. It wants to be devoured. Rax King is a supremely gifted writer and Tacky is a masterly ode to unfettered, unrestrained, and unrepentant joy.”—Kristen Arnett, author of Mostly Dead Things

“I am thankful for Tacky for how it broadens my own considerations of popular culture, of shame, and of celebration. The meditations in the book are equal parts comical, heartbreaking, and revelatory. A monument to uplifting the parts of popular culture that might otherwise be shrugged off and/or dismissed by those who don’t have the imagination to celebrate what they might consider mundane. This book made me feel more at home with my obsessions, both small and large.”—Hanif Abdurraqib, author of A Little Devil in America

“Goddamn, Rax really tore this shit up. THIS BOOK IS GOOD AS HELL.”—Sam Irby, author of Wow, No Thank You.

“Tacky proves something to me that I’ve thought for a while: liking stuff that is bad actually means I’m smart. And it not only means I’m smart but it also means I’m a complicated individual with a vast interior life who is capable of deep, lasting love. Rax King turns cultural artifacts like Degrassi, ANTM, or Jersey Shore into timeless poetry served on a hilarious, horny dish that you’ll ugly-cry while eating because you’ll be thinking of the people in your life who have left, whether for a new person or the next world. Each essay burns brighter than Guy Fieri’s hair. This bitch has me crying to Creed.”—Melissa Lozada-Oliva, author of Dreaming of You

“Tacky approaches all our gaudiest, clumsiest, most embarrassing cultural artifacts—and, at the same time, all our gaudiest, clumsiest, most embarrassing human emotions—with the insight they’re rarely given, and the compassion they deserve. A piercing, sparkling rhinestone of a book.”—Jess Zimmerman, author of Women and Other Monsters

“No one writes a sentence like Rax King, who stacks words atop one another like a mad Subway employee building the Tower of Babel out of deli meats and greasy lettuce. King writes about her obsessions, abjections and triumphs with a singular deftness and a deranged glee . . . Tacky is the friend who gets you wasted and then holds your hair while you puke, the slumber party host with whom you stay up talking too late to get any sleep at all, the stranger outside the venue who lets you bum a cigarette and asks if you want to get out of here and go have some real fun. In short, it’s a fucking blast. Thank god for Rax King, who proves time and again in this collection that the personal essay is alive and well and has some regrettable tattoos to show for it. My toe rings are off to her.—Calvin Kasulke, author of Several People are Typing

“After reading Rax King’s boisterous, big-hearted Tacky, I’ll never look at Guy Fieri the same way again—but beyond that, King shifted the way I think about so many pop cultural phenomena of the past two decades. Her book is like a delicious funnel cake—dusted with frosty wit, soft and chewy in the middle, and I could not stop devouring it.”—Rachel Syme

“Rax King is one of the sharpest and funniest essayists you’ll ever read, and her debut is a bounteous feast of hilarity, tenderness, and nostalgia that will make you feel less alone in all of your own tacky joys and obsessions. Get it, read it, savor it like Guy Fieri savors the most beautiful burger you’ve ever seen. You deserve it.”—Nicole Chung, author of All You Can Ever Know

“Tacky as a collection is not just a tribute to her skill as an essayist but a profound tribute to all things our culture has deemed low-brow . . . It’s King at her best: honest, funny and smart pop culture commentary with engrossing storytelling.”—Alma

“Reading her essays is like finding the perfect lens for an honest and open look at the culture we often keep to ourselves for being too trivial . . . A cocktail of pop culture critique blended with memoir intonations that are always candid and just as often hilarious.”—PBS Rewire

“Vibrant . . . In her keen debut, King taps into her lifelong love affair with low culture in this joyful tribute to the tacky . . . Fearless . . . King deploys a reliably consistent blend of humor, emotion, and insight . . . An engaging, hilarious, unabashed look at what we love in culture and why we should value it for what it is.”—Kirkus Reviews (starred)

“Charming . . . The emotion that runs throughout [Tacky] makes for a powerful antidote to jaded nonchalance . . . King’s witty, conversational dip into nostalgia is a delight.”—Publishers Weekly (starred)

Tacky: Love Letters to the Worst Culture We Have to Offer (Paperback)