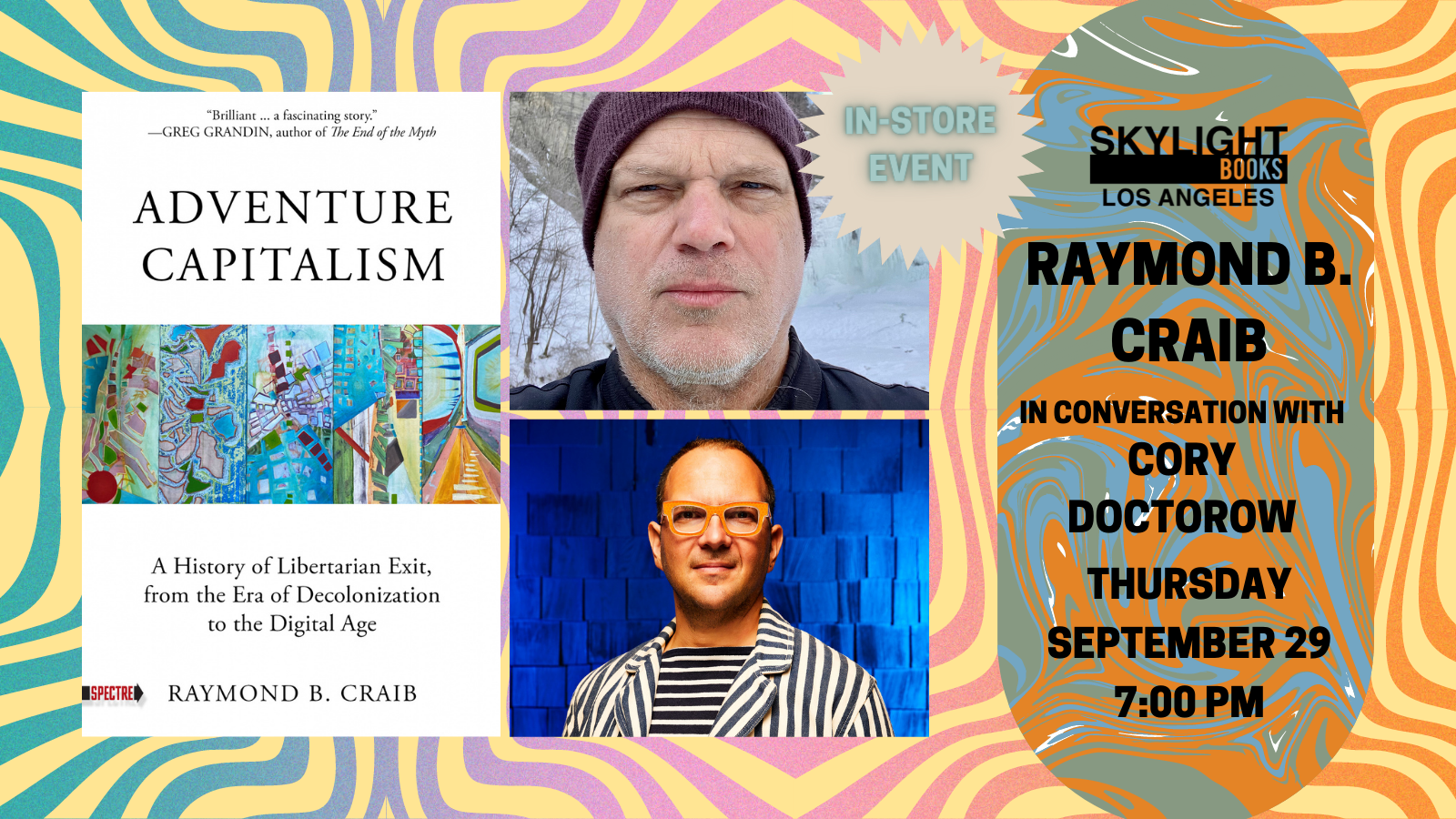 Adventure Capitalism: A History of Libertarian Exit, from the Era of Decolonization to the Digital Age (PM Press)

Imagine a capitalist paradise. An island utopia governed solely by the rules of the market and inspired by the fictions of Ayn Rand and Robinson Crusoe. Sound far-fetched? It may not be. The past half century is littered with the remains of such experiments in what Raymond Craib calls "libertarian exit." Often dismissed as little more than the dreams of crazy, rich Caucasians, exit strategies have been tried out from the southwest Pacific to the Caribbean, from the North Sea to the high seas, often with dire consequences for local inhabitants. Based on research in archives in the US, the UK, and Vanuatu, as well as in FBI files acquired through the Freedom of Information Act, Craib explores in careful detail the ideology and practice of libertarian exit and its place in the histories of contemporary cap-italism, decolonization, empire, and oceans and islands. Adventure Capitalism is a global history that intersects with an array of figures: Fidel Castro and the Koch brothers, American segregationists and Melanesian socialists, Honolulu-based real estate speculators and British Special Branch spies, soldiers of fortune and English lords, Orange County engineers and Tongan navigators, CIA operatives and CBS news executives, and a new breed of techno-utopians and an old guard of Honduran coup leaders. This is not only a history of our time but, given the new iterations of privatized exit--seasteads, free private cities, and space colonization--it is also a history of our future.

Raymond B. Craib is the Marie Underhill Noll Professor of History at Cornell University and the author of The Cry of the Renegade: Politics and Poetry in Interwar Chile, Cartographic Mexico: A History of State Fixations and Fugitive Landscapes, and with Barry Maxwell, co-editor of No Gods No Masters No Peripheries: Global Anarchisms.

Cory Doctorow is a science fiction author, activist and journalist. He is the author of many books, most recently RADICALIZED and WALKAWAY, science fiction for adults; HOW TO DESTROY SURVEILLANCE CAPITALISM, nonfiction about monopoly and conspiracy; IN REAL LIFE, a graphic novel; and the picture book POESY THE MONSTER SLAYER. His latest book is ATTACK SURFACE, a standalone adult sequel to LITTLE BROTHER; his next nonfiction book is CHOKEPOINT CAPITALISM, with Rebecca Giblin, about monopoly, monopsony and fairness in the creative arts labor market, (Beacon Press, 2022). In 2020, he was inducted into the Canadian Science Fiction and Fantasy Hall of Fame.

“The libertarian quest for ‘land no one is using’ inevitably finds ‘land that is used by all,’ and the ugly conflation of the two sends the champions of personal liberty in search of guns, indentured servants, and death squads.” —Cory Doctorow

“They don't like hobbles and they can't stand fences, and so today’s libertarian frontiersmen are looking for land, lots of land, perhaps in New Zealand. Or maybe they’ll jet to Mars, build cities in the thick of Honduras or string barges together and create a floating republic, anything to avoid regulations, laws, and oversights. Ray Craib’s brilliant Adventure Capitalism is a fascinating story of some spectacular fiascos, but it also makes a more profound point: there does exist a class of super-billionaires so rich they’d rather leave the world in ruins than admit humans are social beings and our survival requires recognition that we need each other.” —Greg Grandin

“Of the many fine histories of the rise of Neoliberalism and class war from above, this is the most remarkable—an astonishing story of the global misadventures of Michael Oliver and other modern freebooters as they seek to establish their own Fantasy Islands from the Caribbean to the South Seas. The book tracks a half-century of disaffected capitalists seeking exit from civilized society, from Old Money in revolt against the 1960s to Silicon Valley's Seasteading Institute. Along the way, it makes the malignant ideas of today's Libertarians manifest in a way that no exegesis of von Hayek or Ayn Rand can do, unpacking a gruesome geography of land grabs, mercenary uprisings and secessionist plots where the dreams of billionaire investors become the nightmares of postcolonial people and places. If you don't care for Libertarian ideas before you read this book, you will surely despise them by the end, while gaining a better grasp of the fundamental misanthropy that animates the right wing of the capitalist class.” —Richard Walker, author of Pictures of a Gone City: Tech and the Dark Side of Prosperity in the San Francisco Bay Area

“Some want to change the world, others to flee it. Raymond Craib has written a rich, fascinating account of the libertarians, gold hoarders, soldiers of fortune, coup plotters, and tech bros who’ve sought to realize free-market fantasies by seceding to small islands. It’s an offbeat, quirky history—until you realize how many of the hyper-rich share this escapist dream, and what that means for those of us without our own islands.” —Daniel Immerwahr, author of How to Hide an Empire: A History of the Greater United States

“Adventure Capitalism is a masterpiece of historical excavation into libertarian dreams of a brave new unfree world. Raymond Craib brilliantly combines the historian’s craft with the seductive imaginative force of sci-fi, minting the genre of history noir. His vivid prose takes us on a chilling journey where anarchists, libertarians, con-men, CIA agents, marine biologists and economists come together in their ragtag efforts to exit state regulation through a spurious subversion of the idea of freedom. Starting with the New Deal, we hop from private archipelagoes, floating sea condos, rafts in the high seas and end up in the harsh reality of Innovation Zones. These fantastical stories—the stuff of sci-fi that Craib unearths—reveal the modern American state for what it is: the nightwatchman serving capitalist adventurers on the brink of colonizing Mars.” —Debjani Bhattacharyya, author of Empire and Ecology in the Bengal Delta: The Making of Calcutta

“To leave behind the ‘system’ and build independent societies based on your own convictions—which radicals aren’t enticed by the idea? Yet, as Raymond Craib shows in this highly informative and entertaining work, it is far from glorious when the driving force is a narrow-minded concept of individual liberty rather than the well-being of the people. The ‘exit strategies’ collected here are equally fascinating and frightening. They also help us understand how free-market secessionists and gung-ho libertarians are only the most extreme expressions of neoliberal hegemony.” —Gabriel Kuhn, author of Life Under the Jolly Roger: Reflections on Golden Age Piracy

“Adventure Capitalism is an engaging and exciting book that explores contentious ideals of individualism and concepts of freedom in the most illuminating ways. Craib stunningly shows how ‘exit libertarians,’ while striving for ultimate liberation, offer a particularly constrained version of liberty. This study brings together a look at how autonomy is forged in the context of the welfare state, neoliberalism, sovereignty, engineering, political ecology, political economy, geo-politics, colonialism and decolonization in Oceania and the Caribbean—all presented as global history. The book is a major feat!” —J. K_haulani Kauanui, author of Paradoxes of Hawaiian Sovereignty: Land, Sex, and the Colonial Politics of State Nationalism

“In this highly-readable, well-researched, and original book Raymond Craib deftly maps the pathological history of the far-right libertarian imagination of escape. His character sketches and intellectual history keep the reader grounded even as the crackpot protagonists drift away into fantasy. Their anti-statist, anti-social, anti-ecological quest for ‘exit’ mirrors the logic of cancer or mental illness. Their experiments grow only to die. In these tales of delusion, we see a truly despicable cast of class elites and free market fanatics attempt to live the logic of value in motion: all barriers—physical, political, and social—must give way. And when they do, failure awaits. —Christian Parenti, Professor of Economics, John Jay College, CUNY; author of Radical Hamilton: Economic Lessons from a Misunderstood Founder

“Ray Craib offers a rare glimpse into a dystopic and experimented future in which the capitalist nation-state born of chaos, conflict and centralized control is gutted not of its oligarchies, enclosures, and colonization schemes, but of its spectrum of popular resistance and utopias of collective emancipation. His nuanced global mapping of libertarian escape fantasies and models of privatized fiefdom follows a plethora of wealthy iconoclasts, political castaways, and wayward idealists whose convoluted exit strategies and sovereignty schemes are enabled by the very powers of empire, disenfranchisement, and military force that their libertarian designs of individual freedom claim to abhor.” —Geoffroy de Laforcade

Adventure Capitalism: A History of Libertarian Exit, from the Era of Decolonization to the Digital Age (Spectre) (Paperback)