AT SKYLIGHT: RICARDO WILSON presents AN APPARENT HORIZON AND OTHER STORIES with JENN DEES 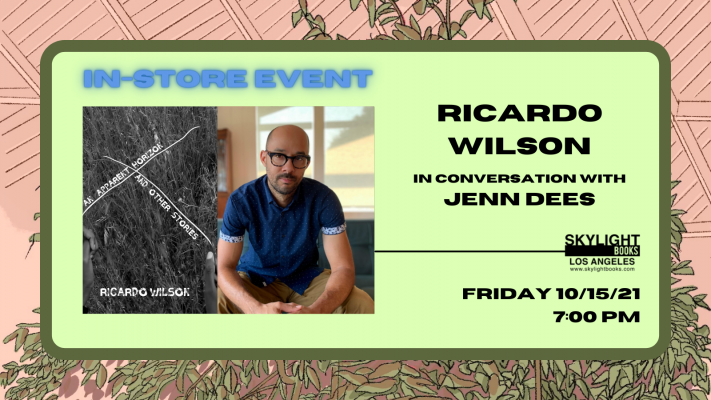 An Apparent Horizon and Other Stories (PANK Books)

An Apparent Horizon and Other Stories takes you to the turn of the 20th Century during the construction of the Panama Canal, the avant-garde theatre scene of New York in the early 1970s, and a present day textured by the psychic and physical violence inflicted on black life. The novella that gives the collection its name follows Mar Gillette, a white environmental activist, in the weeks that follow her failed hunger strike in the California desert. It is in the relative calm of Mar’s childhood home in the hills of Los Angeles that we begin to see the contours of the incomplete mourning of her father that precipitated her fleeing to the desert. After discovering a folder with a collection of her father’s handwritten notes, Mar is forced to delicately navigate a world now conditioned by the burgeoning but nonetheless unconfirmed awareness that she had a half-brother who perished in the police violence surrounding the 1992 civil unrest in Los Angeles. It is through a developing romantic relationship with Teddy, the son of her father’s gardener, that we see her attempt to suture the distances in her life—between herself and her mother, herself and the city, and, ultimately, herself and her father. But like the work of the entire collection, it is ultimately a meditation on that which is irreconcilable and escapes recording.

Ricardo Wilson is the author of An Apparent Horizon and Other Stories and The Nigrescent Beyond: Mexico, the United States, and the Psychic Vanishing of Blackness. He is an assistant professor of English at Williams College and the director of Outpost, a residency for creative writers of color from the United States and Latin America.

Jenn Dees is the programs manager at PEN America in Los Angeles.

Praise for An Apparent Horizon and Other Stories:

Breadth and subtlety, suffused with quiet wit and a laser eye, are but a few of the hallmarks of Ricardo Wilson’s debut collection An Apparent Horizon and Other Stories. Whether he is writing about a self-taught jeweler who must consult an obeah woman during the construction of the Panama Canal, a 21st century father who is still coping with his infant son’s recent illness while also grappling with a former tenant’s sexual assault, or a young scholar who fakes an illness in order to take out a Confederate bust as a prelude to further acts of resistance, Wilson shines a distinctive and complex light on Black lives and the wider world with poetic skill and syntactic verve. A talented storyteller, a marvelous book! – John Keene, author of Counternarratives

Right from the first line An Apparent Horizon braces the reader for stories that are not always what they seem on the surface. These pieces put us in the lives of characters in transition, trying to reach for optimism. Characters lie to themselves for their own good, their own survival; these are not just stories, but rather the stories the characters tell themselves. Run towards the light and you might get burned. – Melissa Ragsly, Contest Judge and author of We Know This Will All Disappear

An Apparent Horizon and Other Stories (Paperback)