AT SKYLIGHT: S. YARBERRY presents A BOY IN THE CITY with ROSIE STOCKTON and IVANNA BARANOVA 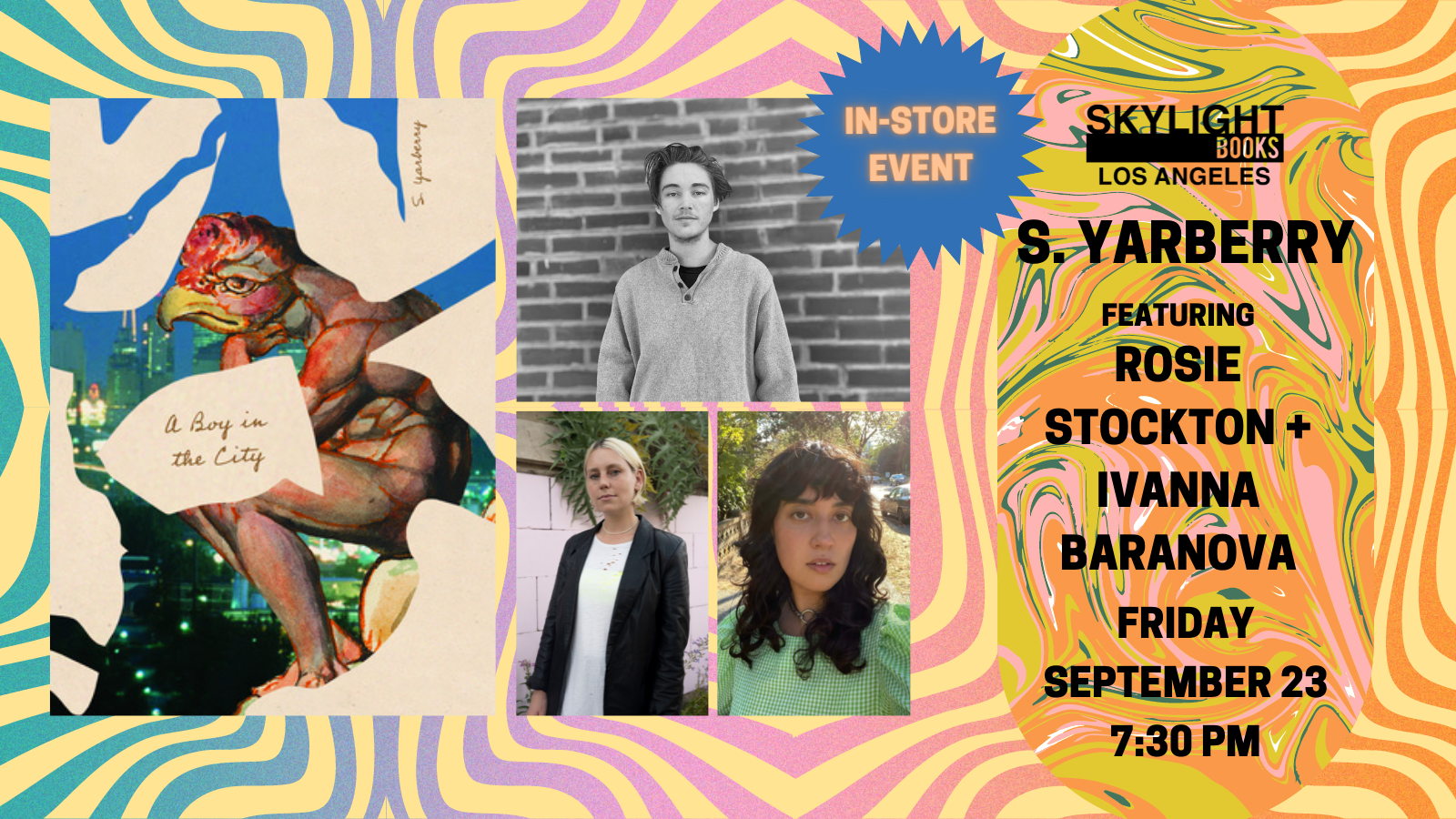 A Boy in the City (Deep Vellum Publishing)

In this debut collection of poetry, the obscure and mundane collide, a fricassee of movement, the cosmopolitan, and intimacy.

A Boy in the City uses poems as pillars to interrupt and excavate an interiority that unfolds and interrogates grim thoughts and intimacy. Yarberry weaves a sexy, glitzy journey through their city, where the speaker can "pose" and "compose" in a "trans way, of course." Clever in its playful allusions to Greek myths, William Blake, and other literary figures, A Boy in the City is a distinct work of joy and liberation that reckons with the language of gender and desire.

S. Yarberry is a trans poet and writer. Their poetry has appeared in AGNI, Tin House, Indiana Review, The Offing, Berkeley Poetry Review, jubilat, Notre Dame Review, The Boiler, miscellaneous zines, among others. Smith‘s other writings can be found in Bomb Magazine, The Adroit Journal, and Annulet: A Journal of Poetics. They currently serve as the Poetry Editor of The Spectacle; they also run a small magazine called Tyger Quarterly. S. has their MFA in Poetry from Washington University in St. Louis and is now a PhD candidate in literature at Northwestern University where they study twenty and twenty-first century receptions of William Blake.

Rosie Stockton is a poet based in Los Angeles. They are the author of Permanent Volta (Nightboat Books), which was the recipient of the 2019 Sawtooth Prize, and Pumpjack (Other Weapons Distro). Their poems have been published by Social Text Journal, VOLT, Jubilat, Apogee, and WONDER. They are currently a Ph.D. Student in the Gender Studies Department at UCLA.

Ivanna Baranova is a poet and interdisciplinary artist based in Los Angeles, and the author of Confirmation Bias (Metatron Press), finalist for the 2018 Metatron Prize. Her work has appeared in DIAGRAM, Blush Lit, Peace On Earth Review, Cixous72, Columbia Journal, and elsewhere. She is the Creative Communications Coordinator at The Poetry Project and an editorial board member of fine. press. Her second book, Continuum, is forthcoming from Metatron Press in 2023.

Praise for A Boy in the City -

"'I want a stupendous smugness, and the self,' this debut poetry collection by S. Yarberry declares, 'to dispense its terrible truth.' Terrible, as in terrific and terrifying, is one body meeting another, knowledge bending toward doubt, and that which we fear being exactly what we want . . . Yarberry changes the world—streetlights are city-tulips, the soul is a slippery fish—to create a new world, to ask, 'How do you see me anyways?' In these poems, where gender, desire, love, and the struggle to say what can’t be said converge, this inquiry offers us a seductive new mind at work. 'I can become anything,' this collection proclaims. 'I did.' And Yarberry’s gift to us is that we can become anything, too." —Paul Tran, author of All the Flowers Kneeling

"'Trans is Latin for across,' states the title of the final poem in S. Yarberry’s A Boy in the City, a book in which Yarberry builds poems from a heady mix of eros, violence, tenderness, and the Blakean ecstatic, poems that seek to bring connection between parts, to give wholeness to the fragmentation that, for Yarberry, can come to define trans life: 'It’s as if/only/when in pieces/I find/myself again.' A Boy in the City argues for a way across and through, past the 'festoonery' of gender and easy binaries, toward a hard-won understanding that 'it is nothing special'—should in fact be a given—'to not want to be hurt.' Yarberry’s is a defiant new voice." —Carl Phillips, author of Pale Colors in a Tall Field

"A Boy in the City is a remarkable collection of poems—incisive, erotic, artfully antiromantic. The poems act as a transcript of a brilliant mind reasoning with itself. Remembered scenes get reenacted against changing backdrops inside a stage-lit braincase—street, bedroom, seashore (“I watched the ocean rise up on its miraculous haunches”). Over time, it becomes clear: the issue is not self-discovery, or so-called "becoming.” We are born knowing who we are—“The world flexed, and I was flown— / my body aching, / for the anatomy of boyhood.” After the flight, all that is left is the work of achieving the wishes we were given." —Mary Jo Bang, author of A Doll for Throwing

A Boy in the City (Paperback)