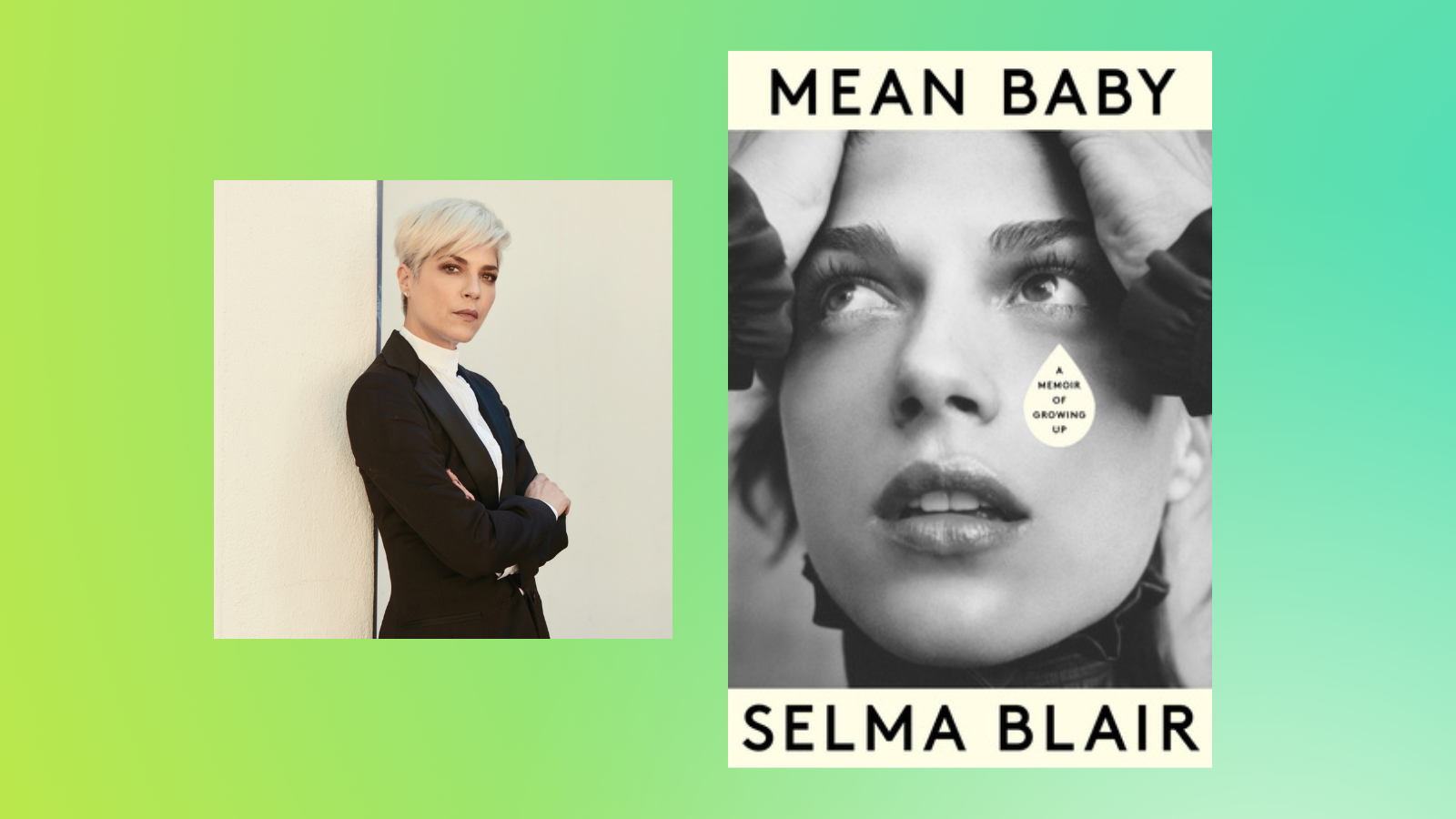 Skylight Books is thrilled to present an in-store signing with Selma Blair, author of Mean Baby! GET TICKETS HERE!

Y﻿our book is your ticket, and signing line positions will be determined based on the order in which tickets were purchased. You will be directed to your position in the signing line when you check on the day of the event.

O﻿nly ticketed copies of MEAN BABY purchased from Skylight Books for this event will be signed, no merchandise or other memorabilia will be signed.

Mean Baby: A Memoir of Growing Up (Knopf)

NEW YORK TIMES BEST SELLER • Selma Blair has played many roles: Ingenue in Cruel Intentions. Preppy ice queen in Legally Blonde. Muse to Karl Lagerfeld. Advocate for the multiple sclerosis community. But before all of that, Selma was known best as … a mean baby. In a memoir that is as wildly funny as it is emotionally shattering, Blair tells the captivating story of growing up and finding her truth.

The first story Selma Blair Beitner ever heard about herself is that she was a mean, mean baby. With her mouth pulled in a perpetual snarl and a head so furry it had to be rubbed to make way for her forehead, Selma spent years living up to her terrible reputation: biting her sisters, lying spontaneously, getting drunk from Passover wine at the age of seven, and behaving dramatically so that she would be the center of attention.

Although Selma went on to become a celebrated Hollywood actress and model, she could never quite shake the periods of darkness that overtook her, the certainty that there was a great mystery at the heart of her life. She often felt like her arms might be on fire, a sensation not unlike electric shocks, and she secretly drank to escape.

Over the course of this beautiful and, at times, devasting memoir, Selma lays bare her addiction to alcohol, her devotion to her brilliant and complicated mother, and the moments she flirted with death. There is brutal violence, passionate love, true friendship, the gift of motherhood, and, finally, the surprising salvation of a multiple sclerosis diagnosis.

In a voice that is powerfully original, fiercely intelligent, and full of hard-won wisdom, Selma Blair’s Mean Baby is a deeply human memoir and a true literary achievement.

Selma Blair is an actress best known for her roles in Legally Blonde, Cruel Intentions, The Sweetest Thing, and Hellboy. Blair was named a Time Person of the Year in 2017 as one of their Silence Breakers, and she was nominated for a Grammy Award for Best Spoken Word Album for her narration of The Diary of Anne Frank. She is the subject of the documentary Introducing, Selma Blair, which reveals Blair’s intimate and raw journey with multiple sclerosis. Blair lives with her son in Los Angeles.

“Elegantly expressed… Evocative… This generous, moving book… roams intuitively, assuredly, between past and present… For years Blair looked to astrologers, mediums, and healers to tell her story… She herself is the right person.” —Susan Burton, The New York Times

"Blair engages with her MS starkly and movingly...[She] puts it all out there." —Joanne Kaufman, The Wall Street Journal

“Selma Blair is not afraid to go there when it comes to sharing the ups and downs of her personal life — particularly in the wake of her 2018 Multiple Sclerosis diagnosis — but never before has she shared such shocking details from her past.” —Kara Warner, People Magazine

“In Mean Baby, an intensely self-aware and cheerfully self-revealing Blair explores the abundant darkness arising from her fraught relationships with her mother, men, alcohol and, ultimately, multiple sclerosis. In different hands, this might make for a more painful read. But throughout her breezy narrative, Blair’s wry humor and her chatty, confiding tone make you feel that you’re spending 300 pages with a smart and, yes, slightly bratty new friend… Blair’s memoir…is funny and frank, a chance to spend time with a brave and big-hearted woman who’s grown up to be not so mean, after all.” —Jennifer LaRue, The Washington Post

"A beautiful tale about how this person learned to love a new version of herself."  —Rachel Martin, NPR's Morning Edition

“Selma Blair has written a book on survival. Mean Baby, the first book released by the actor, examines the often darker moments of her life. From being violated by an educator during her childhood to seeking refuge in the bottom of alcohol bottles by age 7 and experiencing physical pain that she now believes could have been early signs of MS, she reflects back on it all.” —Alex Portée, The TODAY Show

“Unlike many celebrity memoirs, which can read as vanity projects, Mean Baby is unflinching: Blair confronts her history of sexual assault, divorce, loneliness, and violence. She strove for honesty, for total transparency…Readers of Mean Baby will also be grateful for Blair’s generosity.” —Samantha Leach, Bustle

"Riveting...As a child, actor Selma Blair was known as a troublemaker, a reputation she carried into adulthood. In Mean Baby, her raw, beautifully written autobiography, Blair recounts her difficult road—involving an addiction to alcohol and a complicated relationship with her mother—and shares how her multiple sclerosis diagnosis four years ago was, in many ways, what ultimately saved her." —Kristyn Kusek Lewis, Real Simple

“Captivating and unflinching… Raw and real, Mean Baby is Blair's life in words — warts and all. And well worth the time because…it's also funny…uplifting…. After a half-century of searching, [Blair] appears to have found her truth... A dazzling and intense memoir.” —Mike Householder, Associated Press

"Selma Blair is one mean baby and one mean writer! Blair honestly writes about the uncertainty, messiness, joy, and weirdness of living in a ‘broken’ body. Disability is not always constant or known and Mean Baby depicts this reality with compassion and grace.” —Alice Wong, editor of Disability Visibility

“Mean Baby, Selma Blair’s brilliant book, demands attention. It grabs you by the collar and says listen to all that I have to say: about love, pain, motherhood, illness, celebrity, and the tidal ferocity that pours through all our lives. Read it and be caught in the voice of one of our luminous stars.” —Esmé Weijun Wang, best-selling author of The Collected Schizophrenias

“Selma Blair will take every expectation you have and shatter it with this beautiful book. It’s less about illness than it is an effluence of hope, just when you can’t imagine anyone having the spirit to summon it. If you’ve ever felt broken or lost, you’ll find yourself on the pages of this book and maybe see a way to the high road when the author writes, To have been so lucky. The rejects and outsiders have spoken, Selma, and we’ve elected you Queen.” —Mary-Louise Parker, best-selling author of Dear Mr. You

“Mean Baby is straight-up terrific — bold, intimate, sassy, profound — and a vital reminder that the hectic glitter of the exterior rarely reflects the hard-earned wonder of the interior. So, while you might reach for Mean Baby because of the author’s celebrity, you’ll read into the night for her candor, eye for detail, and stunning prose. In an embarrassment of riches, Selma Blair is as talented a writer as she is an actress.”  —Adrienne Brodeur, best-selling author of Wild Game

"Mean Baby is a fascinating exploration about the power of prophecy, of labels, and of one woman's determination to defy them all. Blair is a rebel, an artist, and it turns out: a writer." —Glennon Doyle, author of the #1 New York Times best-seller Untamed and Founder of Together Rising

"Throughout Mean Baby, Blair demonstrates a rare level of self-awareness for someone who’s been encased in the celebrity industrial complex for most of her adult life...Blair writes with unflinching, unapologetic honesty about her trauma....[Mean Baby] fills in the gaps we didn’t even know were missing." —Adam White, The Independent

"Blair revisits in this bold and candid debut her odyssey through addiction, trauma, and illness...Blair, in her typical fashion, finds a way to transform her burden into an opportunity, sharing her experience of living with MS with astounding candor and grace. This compassionate and intelligent work will leave fans floored." —Publisher's Weekly, starred

“Actress Selma Blair always thought of herself as a sidekick or character actress, never a leading lady, but in this illuminating and authentic memoir, she takes center stage as the teller of her own story... The book's first and third parts, covering her childhood and her MS diagnosis (along with the birth of her son), respectively, are spellbinding… A compelling story… remarkably good writing.”  —Booklist, starred

Blair… candidly recounts the events of her life with refreshing honesty…Hilarious and heart-wrenching in equal measure…. In one moment, she discusses biting Seth MacFarlane on the hand, and in the next, she brings readers to tears while talking about her experiences with grief. Blair writes in blunt, witty prose, making this book hard to put down…Witty, funny, heartbreaking, and beautifully written. This book will be loved by fans of Blair’s work and of her MS advocacy. —Library Journal, starred

“Painfully lovely...[An] elegiac contemplation of [Blair’s] life through the lens of a chronic illness that only recently made her past clear. For those seeking a similar sense of enlightenment, reading Mean Baby is a worthy and affecting undertaking.” —Linda M. Castellitto, BookPage