AT SKYLIGHT: STEPHEN MARKLEY presents THE DELUGE with DAN FOGELMAN 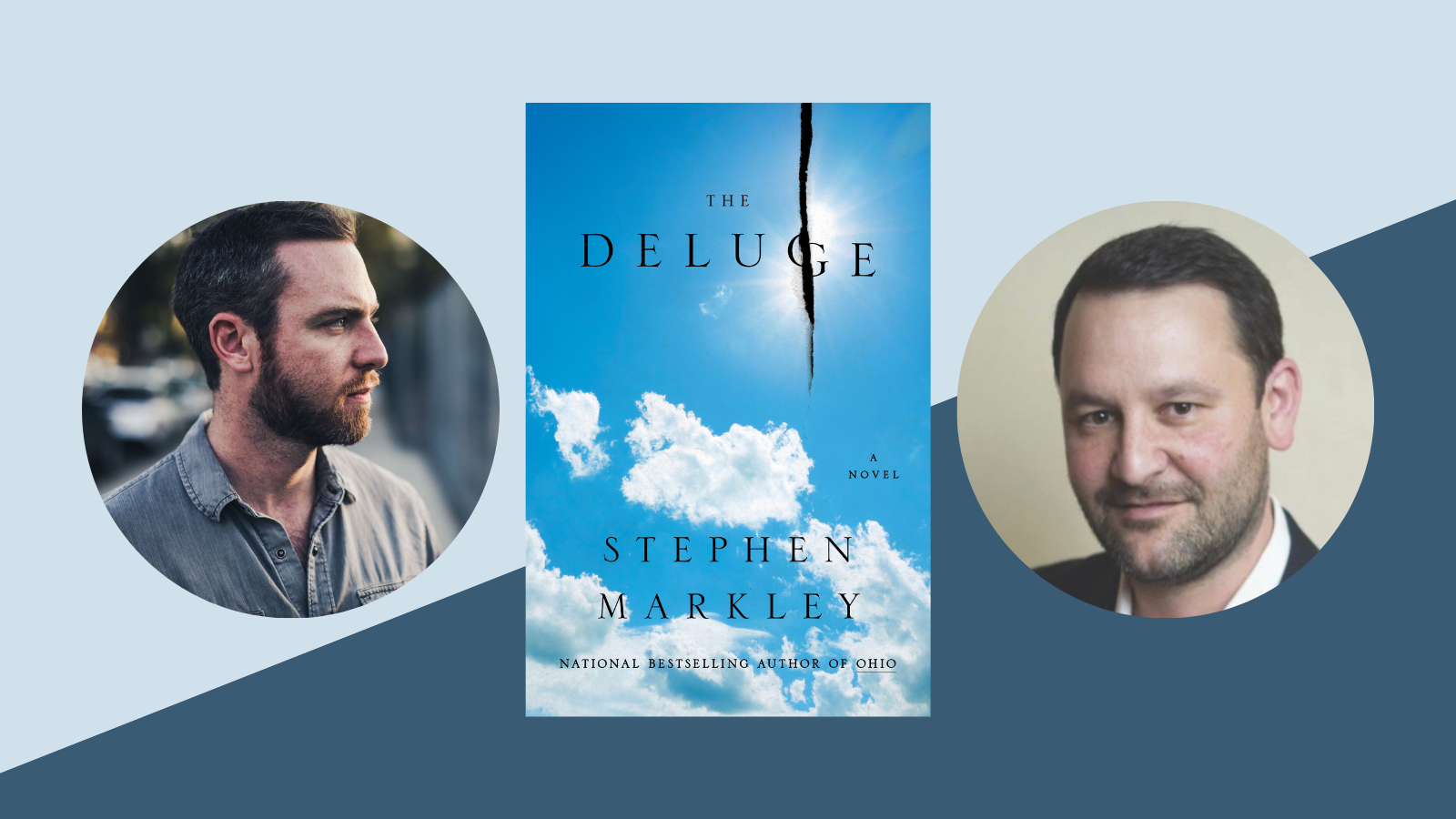 From the bestselling author of Ohio, a masterful American epic charting a near future approaching collapse and a nascent but strengthening solidarity.

In the first decades of the 21st century, the world is convulsing, its governments mired in gridlock while a patient but unrelenting ecological crisis looms. America is in upheaval, battered by violent weather and extreme politics. In California in 2013, Tony Pietrus, a scientist studying deposits of undersea methane, receives a death threat. His fate will become bound to a stunning cast of characters—a broken drug addict, a star advertising strategist, a neurodivergent mathematician, a cunning eco-terrorist, an actor turned religious zealot, and a brazen young activist named Kate Morris, who, in the mountains of Wyoming, begins a project that will alter the course of the decades to come.

From the Gulf Coast to Los Angeles, the Midwest to Washington, DC, their intertwined odysseys unfold against a stark backdrop of accelerating chaos as they summon courage, galvanize a nation, fall to their own fear, and find wild hope in the face of staggering odds. As their stories hurtle toward a spectacular climax, each faces a reckoning: what will they sacrifice to salvage humanity’s last chance at a future? A singular achievement, The Deluge is a once-in-a-generation novel that meets the moment as few works of art ever have.

Stephen Markley is the acclaimed author of Ohio, which NPR called a “masterpiece.” A graduate of the Iowa Writer’s Workshop, Markley’s other books include the memoir Publish This Book and the travelogue Tales of Iceland.

Dan Fogelman created and Executive Produced the acclaimed NBC drama THIS IS US, which received thirty-nine Emmy nominations throughout its six season run. Fogelman also serves as an Executive Producer on the Emmy nominated Outstanding Comedy ONLY MURDERS IN THE BUILDING which stars Steve Martin, Martin Short, and Selena Gomez.

As a writer-director, Fogelman’s directorial debut DANNY COLLINS starred Al Paicno who was nominated for a Golden Globe.  More recently Fogelman’s independent film LIFE, ITSELF starred Oscar Isaac, Olivia Wilde, Annette Bening, and Antonio Banderas and was released theatrically by Amazon in the fall of 2018.

Fogelman was the recipient of the 2016 Humanitas Prize for the THIS IS US pilot script.  He began his career in Hollywood working on THE HOWIE MANDEL SHOW, THE MAN SHOW, and TV Guide Channel.

Praise for The Deluge -

“A ferocious, spectacular achievement. A masterful beast of intellect and heart. Markley should take his place as a visionary of our time.” — Merritt Tierce, author of Love Me Back

“A major achievement, bountifully imagined. Unquestionably one of the best novels to grapple with the climate crisis. I am haunted by it.”— Kevin Brockmeier, author of The Brief History of the Dead

“A stunning and comprehensive view of a future that is both impressively imagined and terrifyingly imminent.”— Fatima Farheen Mirza, author of A Place For Us

“Engrossing and timely. A towering achievement in style and substance that is at once timeless and impossibly urgent.”— Ben Philippe, author of Charming as a Verb

“The Deluge is not just an impressively well-thought-out and all-too-realistic catalog of the ways in which the climate crisis might mutate into something much worse; it's also a page-turner packed with no shortage of thrills or heart.”—Sean Adams, author of The Heap

“A masterclass of climate fiction. This barnstormer of a book is a must-read.”— Nana Nkweti, author of Walking on Cowrie Shells

“A seminal novel and a singular achievement. The Deluge is sure to take a place alongside such great environmental books as The Overstory, The Shell Collector, Barkskins, Flight Behavior and so many others.”— Bill Cusumano, Square Books, Oxford, Mississippi

“An epic work of great ambition, Stephen Markley’s The Deluge is unyielding; it marvels and it mortifies. Few books in a lifetime will make you feel as this one must and while full of every kind of blooming horror, Markley’s magnum opus is as engulfing as it is earnest.”— Jeremy Garber, Powells, Portland Oregon

“A terrifyingly imagined future, made all the more believable by the real characters in the not so distant past and present. An important book.”— Bobbi Irving, Penguin Bookshop in Sewickley, Pennsylvania

“One of those rare novels that manages to be deeply informative and a page-turner at the same time, The Deluge takes us on an intrigue-laden journey into a possible future that is truthful with regard to both the urgency and agency that exists today in addressing the climate crisis.”— Michael Mann, Presidential Distinguished Professor, University of Pennsylvania and author of “The New Climate War”