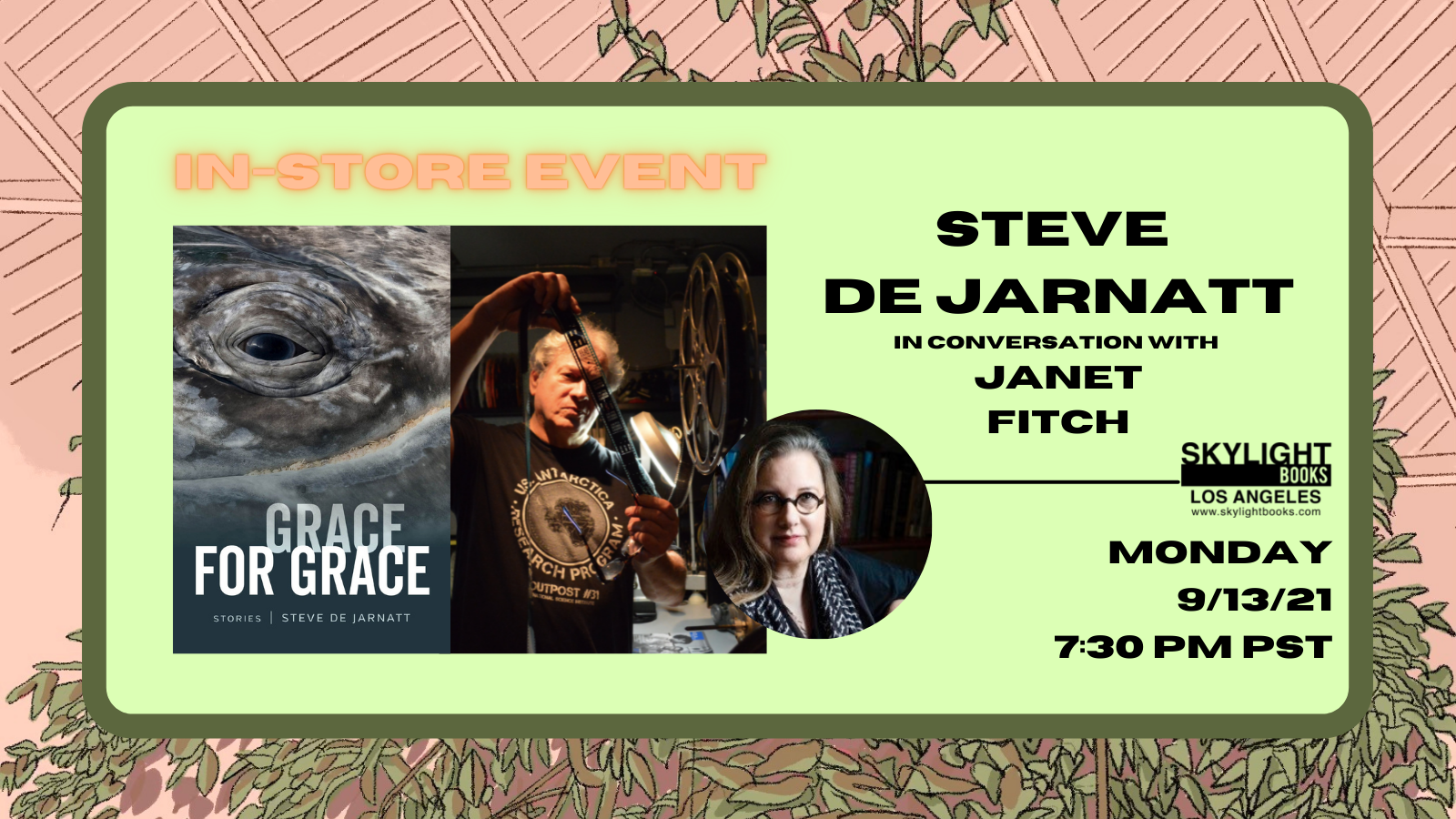 “Rubiaux Rising” (a Best American Short Stories selection) is a tale of triumph amid calamity during Hurricane Katrina, while “Her Great Blue” a surreal interspecies love story. “Mulligan” reveals the private pain of parents traveling across the country to give away their children, and “Wraiths in a Swelter” is both a ghost story and a confessional memoir—following a deliriously exhausted EMT through a deadly Chicago heat wave.

Many of the stories in Grace for Grace are set against the backdrop of natural or manmade catastrophes. These disasters test the characters’ limits as they confront sudden changes and extremes, discovering through their unexpected resourcefulness and endurance something beyond suffering. . . something that approaches the sublime.

Steve De Jarnatt grew up in the small logging town of Longview, WA where he briefly held the state record in the 440 yard dash. He toiled in the film and television racket for 30 years, most notably with three 80s cult film credits – Miracle Mile, Strange Brew, and Cherry 2000. He got off the Hollywood train a few years ago, got an MFA at Antioch University Los Angeles in Creative Writing – and has been pursuing the big money in short fiction. The first story he ever sent out – “Rubiaux Rising” - (from mentor Jim Krusoe’s writing prompt) was selected by Alice Sebold for The Best American Short Stories 2009. Other publications include – New Stories from the Midwest, Santa Monica Review, New England Review, Cincinnati Review, Fifth Wednesday, a Missouri Review Contest winner, and others.  He was a Scholar at Sewanee Writers' Conference and Bread Loaf - and is thinking about starting a band.

Janet Fitch‘s first novel, White Oleander, a #1 bestseller and Oprah’s Book Club selection, has been translated into twenty-eight languages and was made into a feature film. Her second novel, Paint It Black, hit bestseller lists across the country and has also been made into a film. Her third novel, The Revolution of Marina M., begins an epic journey through the Russian Revolution, which concludes with Chimes of a Lost Cathedral. She lives with her husband in Los Angeles.

Praise for Grace For Grace:

“Those of us who revere Steve De Jarnatt’s work as a filmmaker have long understood him to be a master at subverting—and perverting—audience expectations, but nothing prepared me for the stories in Grace for Grace. Working in a grain that might be termed ‘American psychedelic sublime’ – De Jarnatt’s stories are cousin to Barry Hannah’s, Donald Barthelme’s, to Chartles Portis even—which is to say they resemble nothing so much as themselves.  In their syntax, in their feeling, and in their untrammeled imagination they are thrilling and electrical, and absolutely, wildly alive.” - Matthew Specktor

"A feast for the language-lover and a workout for the thrill-minded, Steve De Jarnatt’s short fiction takes us to extremes in these eleven astonishing stories. Exquisite, raw and absolutely unique." — Janet Fitch, author of The Revolution of Marina M. and Chimes of a Lost Cathedral

“The expansive, antic mind behind the stories in Grace for Grace is a formidable literary force. This collection is so fresh and imaginative and marvelously strange—so good—it will leave an indelible impression on its readers, of which Steve De Jarnatt deserves legions.” — Christine Sneed, author of The Virginity of Famous Men

"Now a master of the short-story form, De Jarnatt's prose crackles with wild energy. The stories in Grace for Grace are packed with mythic wonder, humor and tragedy of the highest order, and indelible characters desperately searching to save and be saved. This book is vibrant and provocative, designed to shake the intellect and emotions—I didn't realize how asleep I was until I read these stories, and I'm thankful to be awakened by De Jarnatt and his amazing collection." — Alan Heathcock, author of Volt and 40

"Its stories united by themes of finding a home, Grace for Grace is poetic and avante garde. Steve De Jarnatt’s short story collection pairs imaginative literary language with flawed characters in obscure situations. . . . Grace for Grace is a varied, ornate short story collection that navigates the inner lives and outer experiences of characters whose origins are outside of what’s ordinary." — Foreword Reviews

“De Jarnatt showcases his exquisite imagination with a collection of short stories that are filled with eclectic characters who confront life’s challenges in its many forms. . . . This collection will have you savoring De Jarnatt’s colorful prose and his ability to combine both humor and poignant observation. As many of these stories feature characters dealing with some kind of disaster, they seem eerily timely as well.” — Danielle Bauter

“'Rubiaux Rising' is the shortest piece here and one of the most powerful. Compressed details deliver a visceral jolt in Steve De Jarnatt’s narrative about an Iraq veteran, addicted to painkillers since he lost an arm and a leg to an IED, who has been locked in an attic by his mother to detox when Katrina strikes. It’s the first story the author ever submitted for publication, one of the discoveries that makes this series so valuable." — Kirkus review of Best American Short Stories, 2009

"Evident from the first sentence of each of the stories in his debut collection Grace for Grace...is an exuberant love of language and a wonderfully musical ear.  Likewise in evidence in De Jarnatt’s stories are an unwavering curiosity and an unappeasable hunger for the innumerable varieties of human experience.  Each story offers up something extraordinary for the reader." — The National Book Review

“De Jarnatt puts forth a collection of short stories. . . each written with a filmmaker’s eye for expansive dramatic structure and the signal-shifting image: the hopeful horizon after an imperiled night, the crash of lightning/thunder after a mad scientist’s reveal.” — Hindsight Magazine