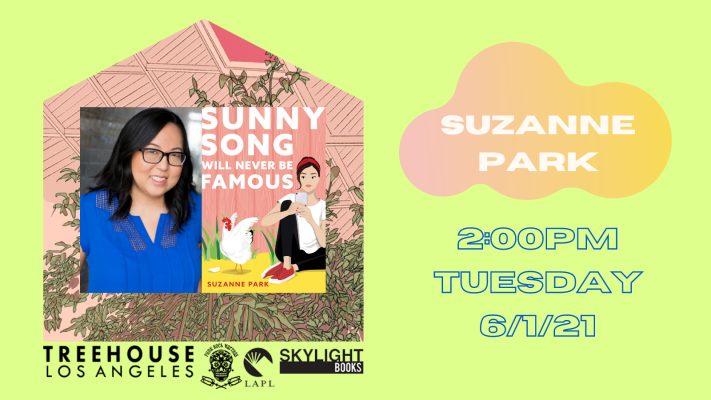 *Join Skylight Treehouse and the LA Public Library virtually on Crowdcast for the launch of Suzanne Park's new YA novel SUNNY SONG WILL NEVER BE FAMOUS! RSVP here to join the livestream or watch the replay.

A social media influencer is shipped off to a digital detox summer camp in this funny coming-of-age story, perfect for fans of Jenny Han's The Summer I Turned Pretty and Love and Gelato.

Not on Sunny's list: accidentally filming a PG-13 cooking video that goes viral (#browniegate). Extremely not on her list: being shipped off to a digital detox farm camp in Iowa (IOWA??) for a whole month. She's traded in her WiFi connection for a butter churn, and if she wants any shot at growing her social media platform this summer, she'll need to find a way back online.

But between some unexpected friendships and an alarmingly cute farm boy, Sunny might be surprised by the connections she makes when she's forced to disconnect.

Suzanne Park is a Korean-American writer who was born and raised in Tennessee. In her former life as a comedienne, she appeared on BET, was the winner of the Seattle Sierra Mist Comedy Competition, and placed as a semi-finalist in NBC's "Stand Up For Diversity" showcase in San Francisco. She currently resides in Los Angeles with her husband, female offspring, and a sneaky rat that creeps around on her back patio. In her spare time, she procrastinates.

So We Meet Again: A Novel (Paperback)