AT SKYLIGHT: A TREEHOUSE STORYTIME with ERIC GERON, author of POULTRYGEIST 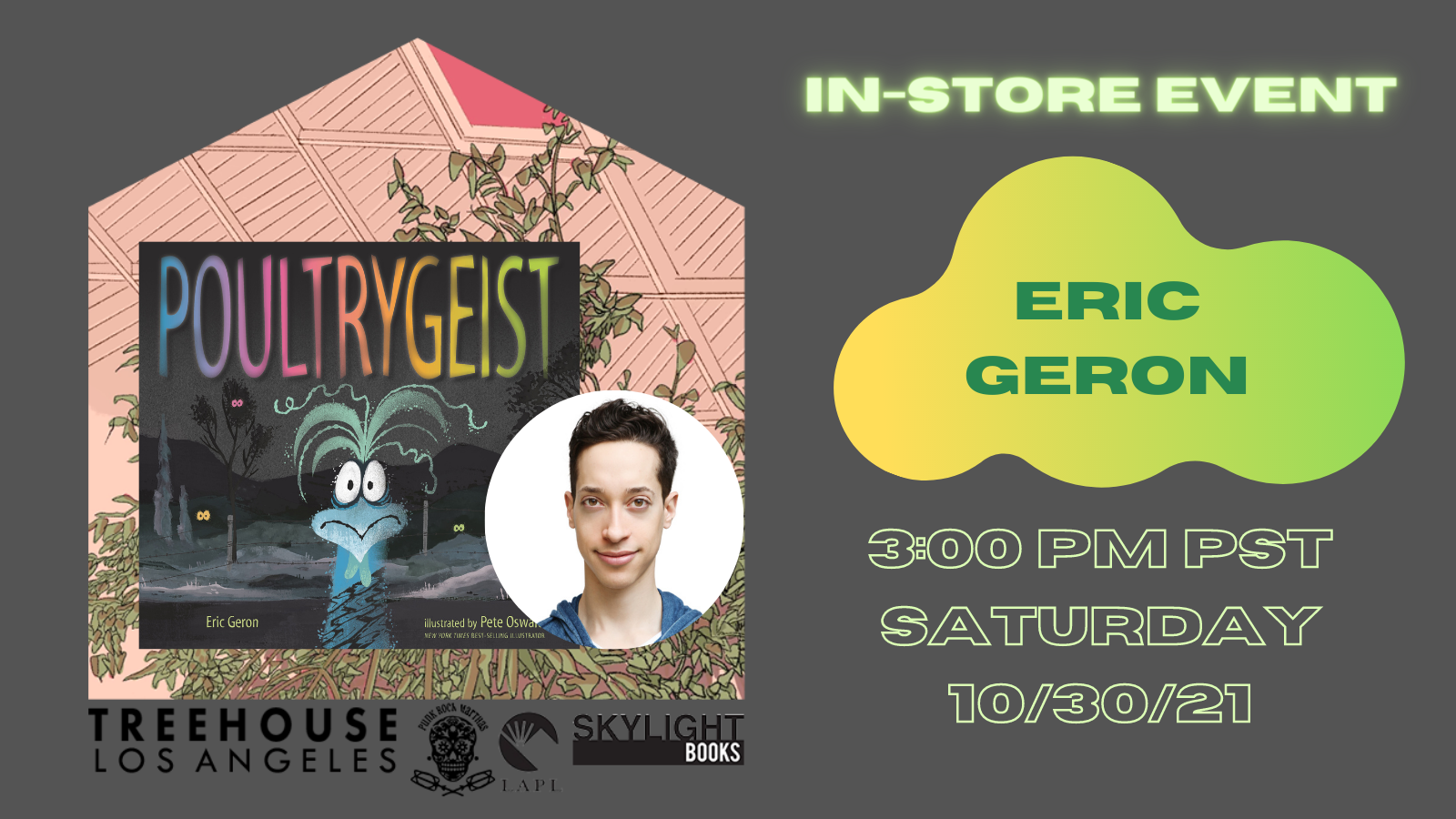 This is event is presented in partnership with the LA Public Library and Punk Rock Marthas!

From a debut picture-book author and a #1 New York Times best-selling illustrator, a wry take on "Why did the chicken cross the road?” that gives a whole new meaning to “the Other Side.” Cock-a-doodle-BOO!

It’s punny. It’s spooky. It’s a meta picture book that puts a fresh spin on an old joke and elevates chicken comedy to ghastly new levels. A little spring chicken crosses the road but quickly gets flattened under a semitruck. The barnyard beasts who’ve gone before break the news: now that Chicken’s fried—dispatched to the Other Side—Chicken has a job, an unwanted job, as a noisy troublemaking ghost. This fowl may be weak in the beak, but Chicken knows that scaring people isn’t nice. There is such a thing as a friendly ghost, after all—isn’t there? Loaded with laughs and shivers, this Halloween-ready treat features ghoulishly funny art by the illustrator of the #1 New York Times best-selling Bad Seed series. Let the haunting begin!

No chickens were harmed in the making of this book.

Eric Geron earned a creative writing degree from the University of Miami, and spent many years as a children’s book editor for Disney, acquiring numerous New York Times bestsellers, such as Gravity Falls: Journal 3 (#1), Hocus Pocus and the All-New Sequel (#1), and Lost Legends (#4). He is the writer of the #3 New York Times bestseller, Descendants: A Novelization (under his pen name Rico Green), among other titles. Originally from Summit, New Jersey, Eric Geron now lives in Los Angeles, California.

"The chicken crosses the road…and arrives on the other side as a ghost. . . . Oswald’s illustrations display masterful use of color, with bright, ghostly animals against a dark, often all-black background, the dialogue shown in colors that correspond to the speakers. These ghosts do become scary but not enough to completely terrorize readers. Oswald’s skill is seen in full effect, as readers witness only the animal ghosts’ reactions to the poultrygeist’s scariest face, building suspense for the full reveal. This book is just right for kids easing into the slightly scary and macabre but who still want a safe and fun read."—Kirkus Reviews (starred review)

"Thanks to a passing semi, a chicken crossing the road definitely gets to the Other Side—but rejects the insistence of hovering deer, possum, and other fellow roadkill that it’s payback time. . . Young audiences may have different views, though, and Oswald obliges by crafting cartoon images of spectral wildlife with staring, glaring eyes and shark-like teeth, and also making use of page turns to work dramatic “jump!”–worthy changes of size and expression." —Booklist

"[Geron] is serendipitously paired with artist and production designer Oswald. The dynamic duo absolutely know how to entertain, Geron with the clever, multilayered phrases ("cock-a-doodle-BOO!"; "ghosts of a feather haunt together!"), Oswald with the colorful and expressive, digitally created ghouls and goblins ready to engage and captivate from the OTHER SIDE. The result proves supernaturally spooktacular. . . cleverly captivating."—Shelf Awareness

"Against the digital illustrations’ midnight-dark backgrounds, the brightly colored poltergeists’ silliness should prevent young readers from feeling too “weak in the beak”. . . . It’s hard to feel chicken when a book is this clucking hilarious."—The Horn Book