AT SKYLIGHT: WILLIAM E. JONES reads from I SHOULD HAVE KNOWN BETTER 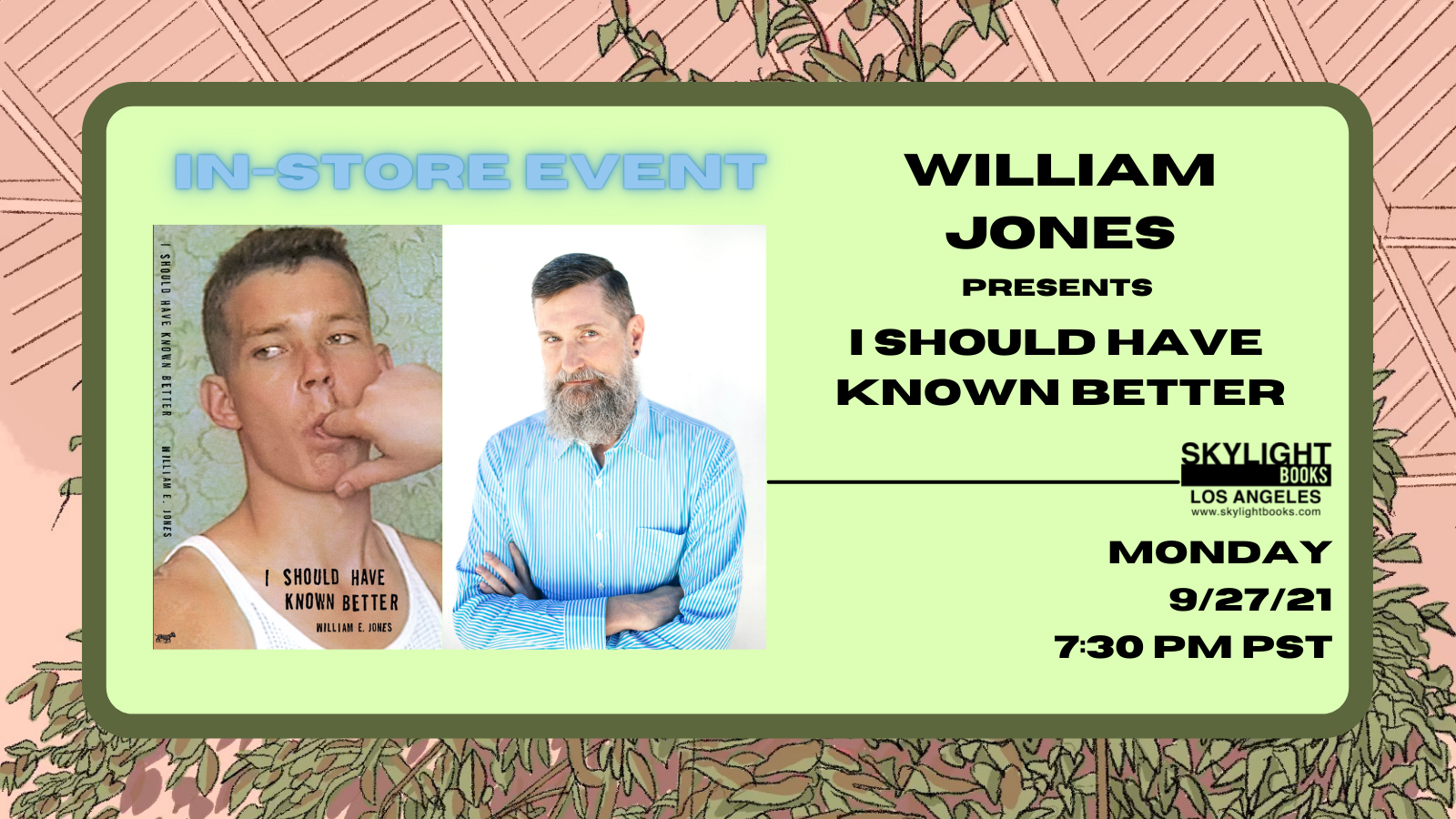 I Should Have Known Better (We Heard You Like Books)

William E. Jones’s I Should Have Known Better is a sequel to the sleeper hit I’m Open to Anything (2019), expanding the original’s scope and ambition. The new book has been produced entirely with the support of a crowdfunding campaign that reached five figures and 150% funding, an unprecedented accomplishment for a literary novel.

I Should Have Known Better’s first person narrator, while working at a dead-end job in Los Angeles during the mid-1990s, reconnects with his best friend Moira, recently returned from Central America, and makes a new friend, Bernie, who teaches the history of photography. The two of them convince him to pursue a master’s degree as a way of escaping the unrewarding life of a video store clerk. Once the narrator is exposed to an academic environment, he takes a dim view of the education that art school has to offer, but is happy to meet a group of talented fellow students who become close friends. He encounters a number of art world figures, ranging from the brilliant to the abject, who disabuse him of his illusions. The narrator has his most instructive experiences off campus, especially a love affair with the handsome and mercurial Temo, an insolent rich kid who leads a double life. Together they explore their sexual limits in scenes of bracing explicitness.

I Should Have Known Better bears witness to the last gasp of Los Angeles bohemia at the end of the twentieth century. The novel paints precise portraits of inspired eccentrics devoted to pursuing their dreams, “shopping artists” who believe in nothing but hedonism, and latter-day leftists who find themselves directionless after the fall of communism. Above all, the book pays tribute to the impulsive experiments and intense friendships of youth.

William E. Jones is an artist, filmmaker, and writer. He has made two feature length experimental films, Massillon (1991) and Finished (1997), the documentary Is It Really So Strange? (2004), and videos including The Fall of Communism as Seen in Gay Pornography (1998), Psychic Driving (2014), and Fall into Ruin (2017). His work has been the subject of retrospectives at Tate Modern (2005), Anthology Film Archives (2010), Austrian Film Museum, and Kurzfilmtage Oberhausen (both 2011). Jones's writing has also appeared in periodicals such as Animal Shelter, Area Sneaks, Artforum, Bidoun, Butt, Frieze, Little Joe, Mousse, Osmos, and The White Review. He is the author of the nonfiction books Killed: Rejected Images of the Farm Security Administration (2010), Halsted Plays Himself (2011), Imitation of Christ (2013), and True Homosexual Experiences: Boyd McDonald and Straight to Hell (2016); as well as the novels I’m Open to Anything (2019) and I Should Have Known Better (2021). He lives in Los Angeles.

I Should Have Known Better (Paperback)