SOLD OUT /// AT THE PHILOSOPHICAL RESEARCH SOCIETY: HOLLY BLACK presents BOOK OF NIGHT in conversation with LEIGH BARDUGO 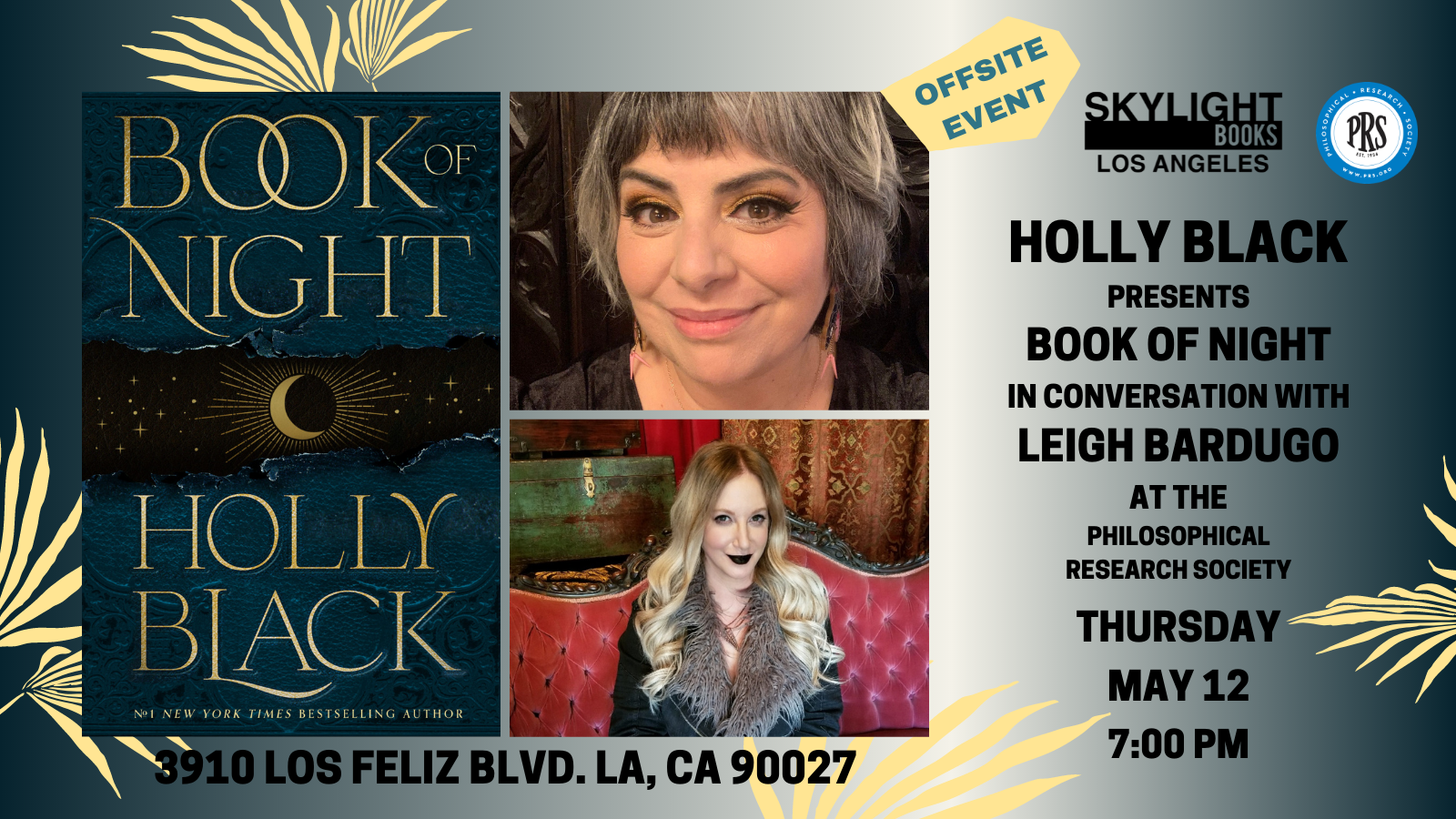 THIS EVENT IS SOLD OUT! IF YOU WOULD LIKE TO GET ON A WAITLIST, PLEASE EMAIL EVENTS@SKYLIGHTBOOKS.COM

Ticket price includes a copy of Book of Night and admission to the in-person event. Get your tickets here!

There will be no signing line following the reading and conversation. All books ordered through Skylight will be pre-signed/personalized.

#1 New York Times bestselling author Holly Black makes her stunning adult debut with Book of Night, a modern dark fantasy of betrayals, cabals, and a dissolute thief of shadows, in the vein of Neil Gaiman and Erin Morgenstern.

She's spent half her life working for gloamists, magicians who manipulate shadows to peer into locked rooms, strangle people in their beds, or worse. Gloamists guard their secrets greedily, creating an underground economy of grimoires. And to rob their fellow magicians, they need Charlie Hall.

Now, she’s trying to distance herself from past mistakes, but getting out isn’t easy. Bartending at a dive, she’s still entirely too close to the corrupt underbelly of the Berkshires. Not to mention that her sister Posey is desperate for magic, and that Charlie's shadowless, and possibly soulless, boyfriend has been hiding things from her. When a terrible figure from her past returns, Charlie descends into a maelstrom of murder and lies.

Determined to survive, she’s up against a cast of doppelgangers, mercurial billionaires, gloamists, and the people she loves best in the world—all trying to steal a secret that will give them vast and terrible power

Holly Black is the #1 New York Times bestselling and award-winning author of speculative and fantasy novels, short stories, and comics. She has sold over 26 million books worldwide, and her work has been translated into over 30 languages and adapted for film. She currently lives in New England with her husband and son in a house with a secret library. Book of Night is her adult fiction debut.

Leigh Bardugo is a #1 New York Times bestselling author and the creator of the Grishaverse (now a Netflix original series) which spans the Shadow and Bone trilogy, the Six of Crows duology, The Language of Thorns, and King of Scars—with more to come. Her other works include Wonder Woman: Warbringer and Ninth House (Goodreads Choice Winner for Best Fantasy 2019), which is being developed for television by Amazon Studios. She lives in Los Angeles. Bardugo's Hell Fire, the sequel to Ninth House, is now available for pre-order.

Praise for Book of Night -

"Dark, strange, thick with mystery and twists—a story so believable in its magic, you'll be keeping one eye on your shadow as you turn the pages." — Leigh Bardugo, New York Times bestselling author of Ninth House

"If Neil Gaiman channeled Stephen King, the result might be this book . . . scintillating prose, whiplash twists, and a voice of character that demands to be heard from again.” — James Rollins, New York Times bestseller of The Starless Crown

"A dark romp full of danger and shadows with a razor sharp heroine and vivid magic." — Zoraida Córdova, Nationally bestselling author of The Inheritance of Orquídea Divina

"Book of Night delivers hot sex, a breathless plot, perfect characters, and some of the most gorgeous writing I've read in years, sharp as a razor blade, clear as a one-way glass." — Ellen Kushner, award-winning author of Swordspoint

"A dark and glittering cocktail of a book, heady with glamour and seediness, deep magic and desperate grifters. Black's spiky, irresistible heroine will lead you like a will o' the wisp into the dark." — Melissa Albert New York Times Bestselling author of The Hazel Wood

"Holly Black is a master of fantasy with the Midas touch--there is no story she cannot turn to gold." — V.E. Schwab, New York Times bestselling author of The Invisible Life of Addie LaRue

"A gripping ride from start to finish. Book of Night invites you to reckon with the shadows of your past." — Olivie Blake, author of The Atlas Six

“Black is a master at world-building.” — The New York Times