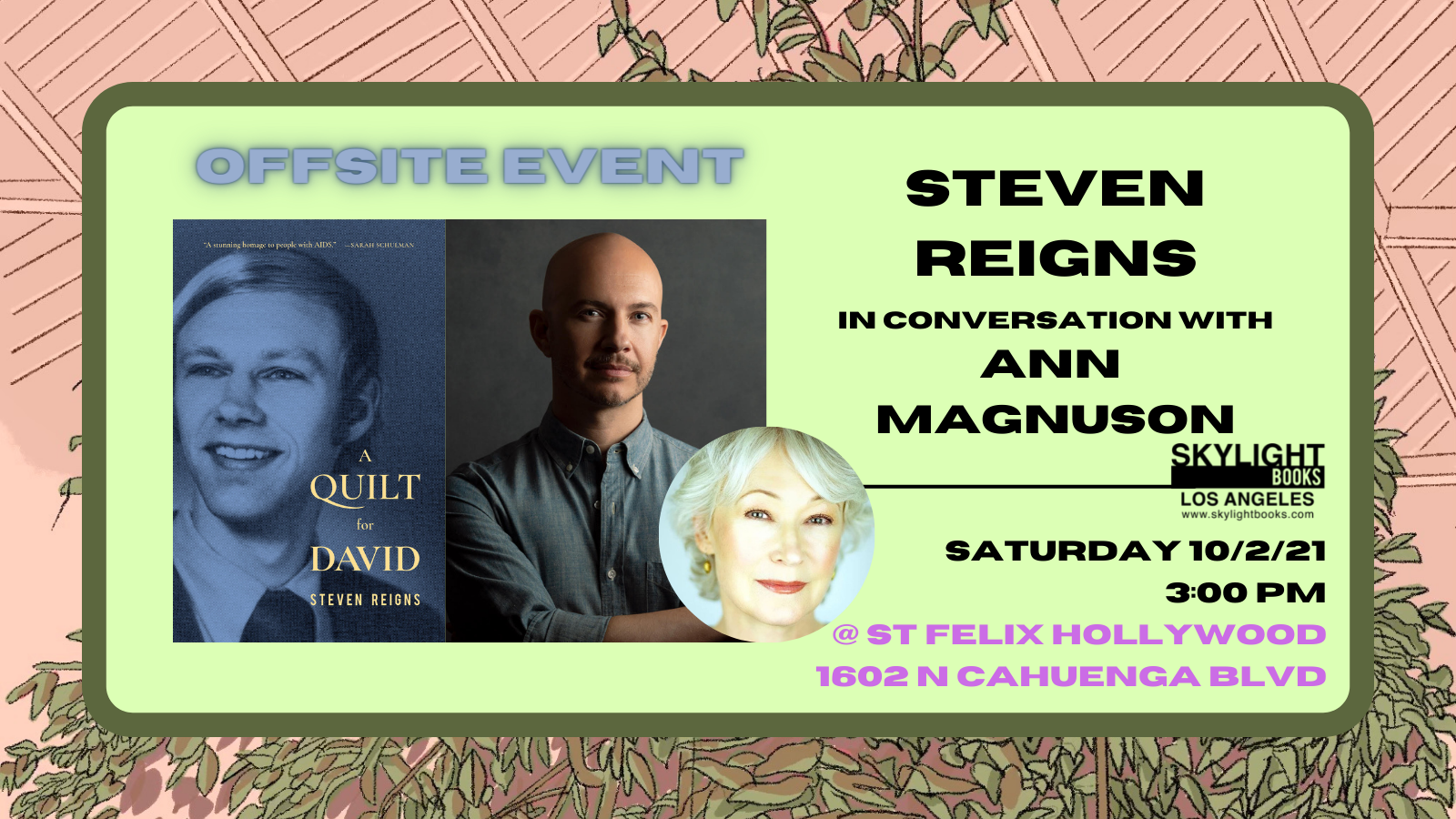 The hidden history of a vulnerable gay man whose life and death were turned into tabloid fodder.

In the early 1990s, eight people living in a small conservative Florida town alleged that Dr. David Acer, their dentist, infected them with HIV. David's gayness, along with his sickly appearance from his own AIDS-related illness, made him the perfect scapegoat and victim of mob mentality. In these early years of the AIDS epidemic, when transmission was little understood, and homophobia rampant, people like David were villainized. Accuser Kimberly Bergalis landed a People magazine cover story, while others went on talk shows and made front page news.

With a poet's eulogistic and psychological intensity, Steven Reigns recovers the life and death of this man who also stands in for so many lives destroyed not only by HIV, but a diseased society that used stigma against the most vulnerable. It's impossible not to make connections between this story and how the twenty-first century pandemic has also been defined by medical misinformation and cultural bias.

Inspired by years of investigative research into the lives of David and those who denounced him, Reigns has stitched together a hauntingly poetic narrative that retraces an American history, questioning the fervor of his accusers, and recuperating a gay life previously shrouded in secrecy and shame.

Steven Reigns, Los Angeles poet and educator, was appointed the first Poet Laureate of West Hollywood. He has two previous collections, Inheritance and Your Dead Body is My Welcome Mat, and over a dozen chapbooks. Reigns edited My Life is Poetry, showcasing his students' work from the first-ever autobiographical poetry workshop for LGBTQ seniors. Reigns has lectured and taught writing workshops around the country to LGBTQ youth and people living with HIV. He worked for a decade as an HIV test counselor in Florida and Los Angeles. Currently he is touring The Gay Rub, an exhibition of rubbings from LGBTQ landmarks around the world, and has a private practice as a psychotherapist. He lives in West Hollywood, CA.

Ann Magnuson is a writer/ actress/ singer/ musician/ performer whose eclectic resume traverses the entertainment landscape like few others. She has acted in Hollywood blockbusters, Off-Broadway plays, TV sitcoms and indie films; fronted various bands; made records; written for numerous publications and has presented her original performance art pieces at art institutions worldwide including the Whitney Museum (performing a 5-hour “Tribute to Muzak” in the museum elevator), The Museum of Modern Art, Lincoln Center for the Performing Arts, BAM, LACMA, MOCA, The Hammer Museum, REDCAT, The Walker Art Center, The Andy Warhol Museum and in places as far flung as Tokyo’s Sogetsu Hall and The Ice Hotel inside Sweden’s Arctic Circle. Ann was inducted into the West Virginia Hall of Fame (along with Hasil Adkins, Fred “Sonic” Smith) in early 2018 and, in May 2020, West Virginia University will be present her with an honorary doctorate from their College of Arts. Ann Magnuson currently lives in Los Angeles with her husband, architect John Bertram.

Praise for A Quilt for David:

Much too long, suffering has been part of our collective queer legacy. We weather the storm of insult to character and seemingly irreconcilable injustice in tandem with the hope that the arc of time will bend towards justice; our time is now. A Quilt for David is a posthumous journal of vindication.--Brontez Purnell, author of 100 Boyfriends

A stunning homage to people with AIDS.--Sarah Schulman, author of Let the Record Show: A Political History of ACT UP New York, 1987-1993

I found this an incredibly moving book. Reigns deals in hard truths, revisioning one man's life and death, and our collective queer history.--Justin Torres, author of We the Animals

A Quilt for David is amazing and so powerful, filled with anger and frustration . . . It's an unforgettable book.--Marie Cloutier, Greenlight Bookstore, Brooklyn, NY

Told in short, occasionally haiku-like entries, Reigns has done what literature should: put the reader into the mind, the suffering, of another human being.--Andrew Holleran, author of Chronicle of a Plague, Revisited

Steven Reigns lifts David Acer thirty years after his death to show the naked cost of violent, unexamined public opinion around the catastrophe of AIDS. This poetry masterfully documents the tangle of hatred and lies haunting a generation of survivors. I am often grateful for what poems give to me, most especially the ones in this book.--CAConrad, author of AMANDA PARADISE: Resurrect Extinct Vibration

This writing is energetic, alive, and uncensored. Through poetry and prose we glean a deep understanding of a life misunderstood and mischaracterized. Reigns goes to the mat to find out what really happened, and with his expert pacing we're right there with him.--Natalie Goldberg, author of Writing Down the Bones

One of the most important roles a poet can assume is that of emotional historian. Reigns certainly understands that notion in this necessary and genre-bending book.--Richard Blanco, 2013 Presidential Inaugural Poet, author of How to Love a Country

A Quilt for David (Paperback)