IN-STORE SIGNING: JAIME HERNANDEZ, author of QUEEN OF THE RING 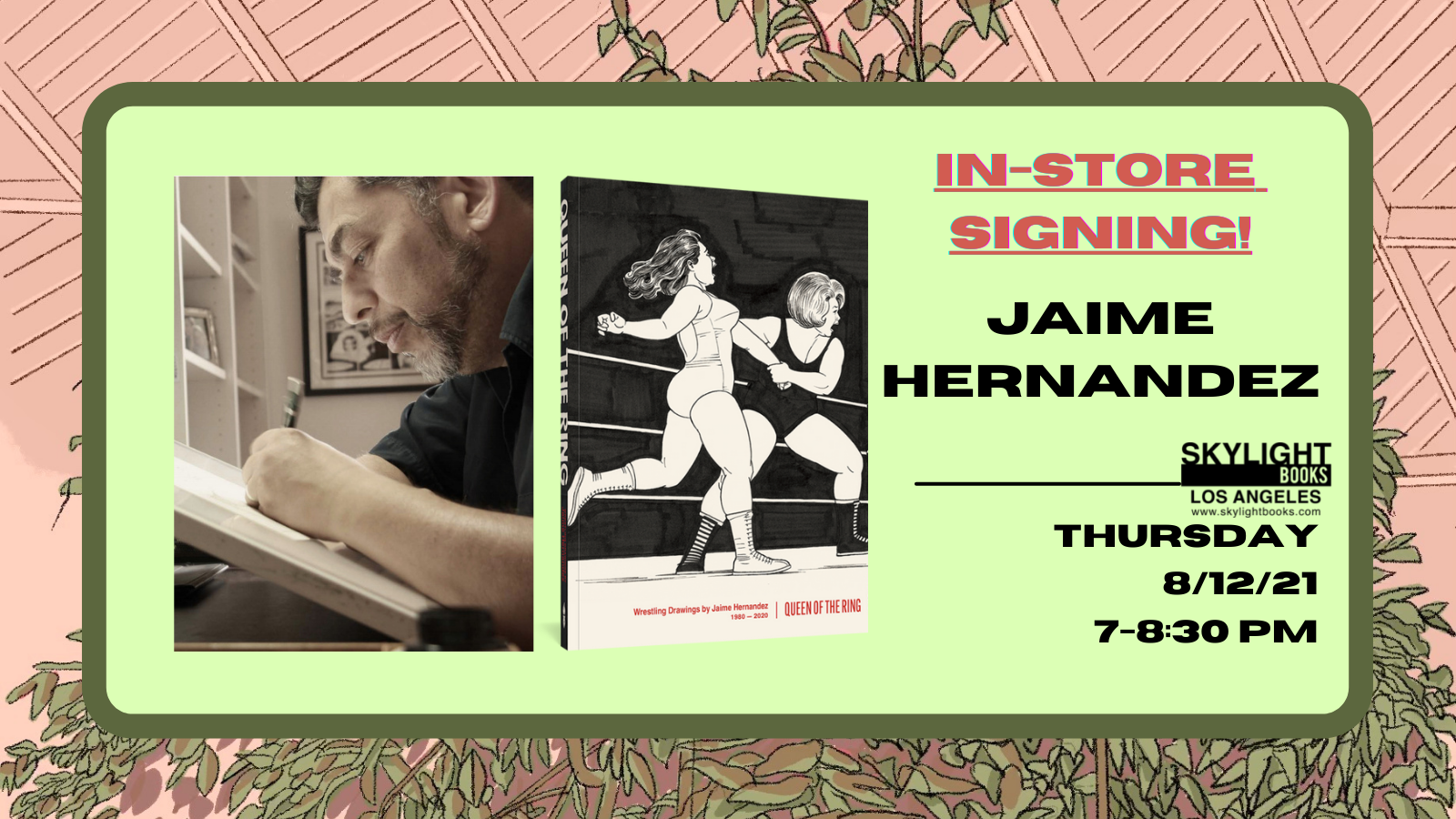 Join us on Thursday, August 12 from 7-8:30 pm to pick up a copy of Queen of the Ring, get your book signed, and meet Jaime Hernandez! Masks will be required to enter the store and to approach the table.

Queen of the Ring: Wrestling Drawings by Jaime Hernandez 1980-2020 (Fantagraphics)

For the past 40 years, acclaimed graphic novelist Jaime Hernandez has been creating a Love and Rockets-adjacent world — set in the heyday of 1960s and '70s women's wrestling and lucha libre! — with an entirely separate cast of characters who have aged and evolved: the beautiful and brutal Bettie Rey, the I.F.W. Pacific Women's Champion — a.k.a. Golden Girl — as well as former champions Pantera Negra, Miss Kitty Perez, and many more.

As Hernandez puts it, "It's my Love and Rockets world that's not my Love and Rockets world." This best-of book spotlights the women who are often ignored in pro wrestling in 125 full color illustrations: pin-ups, action shots, fake wrestling magazine covers, all presented in a deluxe paperback that echoes the lucha libre magazines of the 1960s. Hernandez also discusses the work in an interview with fellow cartoonist Katie Skelly.

Despite having created one of the most expansive and remarkable casts of characters of any cartoonist who ever lived (under the umbrella of the ongoing L&R comic book series), acclaimed graphic novelist Jaime Hernandez — Will Eisner Hall of Famer; Eisner, Harvey, Ignatz, and PEN Award winner; L.A. Times Book Prize winner; and on a very short list of contenders for the title of America's Greatest Living Cartoonist — has been privately amassing a body of work that no one else has ever seen for over 40 years. Until now.

Jaime Hernandez, together with his brothers Gilbert and Mario, co-created the award-winning comic book series Love and Rockets.  He is best known for his Locas stories, which follow the exploits (romantic and platonic) of his original characters, Maggie and Hopey. Love and Rockets has evolved into one of the great bodies of American literary fiction, spanning four decades and countless high-water marks in the medium's history. In 2017, Jaime was inducted into the Will Eisner Comic Book Hall of Fame, has won innumerable comics awards, and was the 2014 winner of The Los Angeles Times Book Prize. His latest book is Queen of the Ring, a collection of his original women’s wrestling drawings created over the past 40 years.

Queen of the Ring: Wrestling Drawings by Jaime Hernandez 1980-2020 (Hardcover)