IN-STORE SIGNING: LILLIAM RIVERA, author of WE LIGHT UP THE SKY 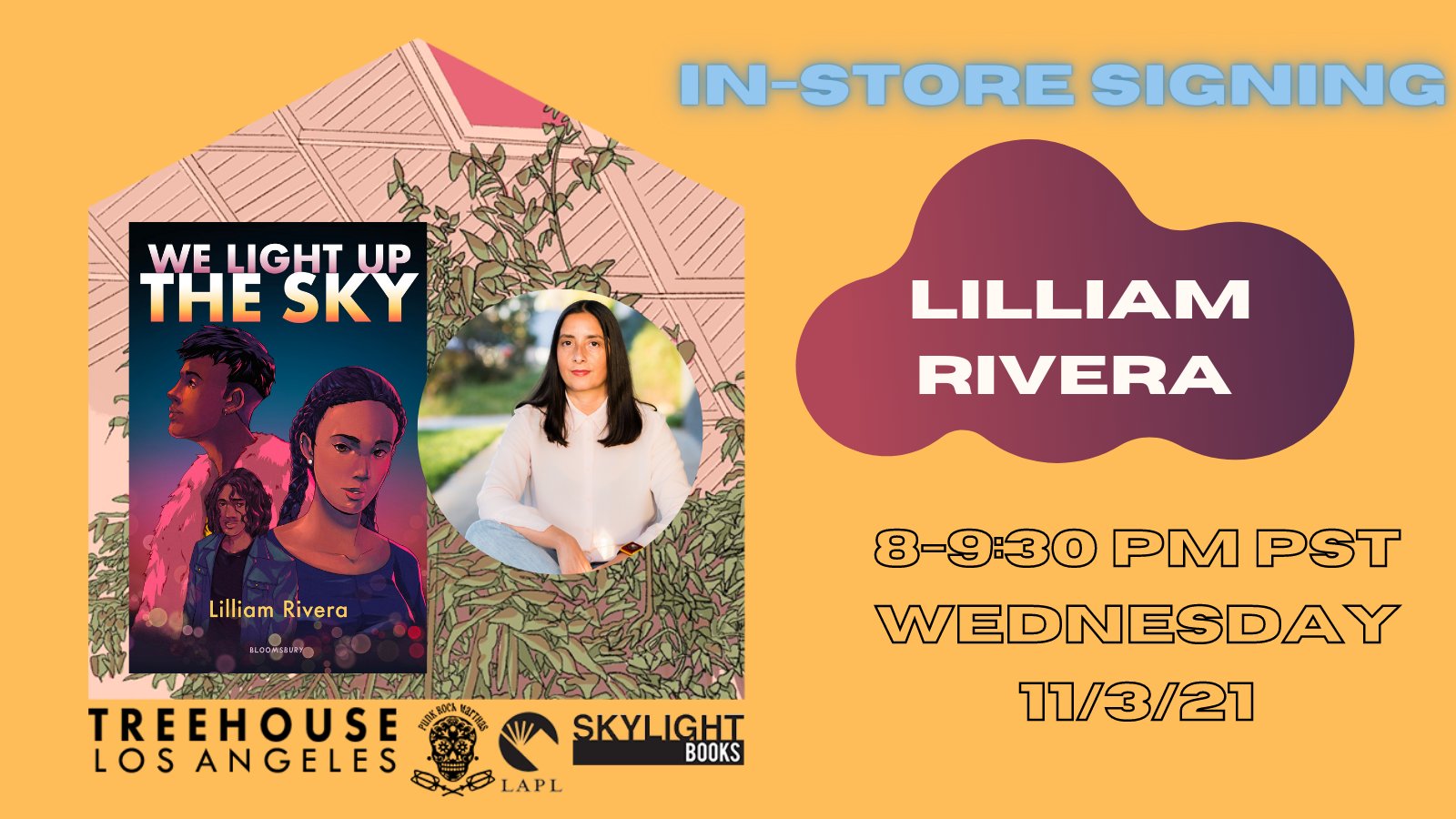 *We're so excited for a fun evening signing featuring Lilliam Rivera, author of We Light Up the Sky, following the virtual event. Join us on Wednesday, November 3rd from 8:00 PM - 9:30 PM for a meet and greet and get your book signed!

We Light Up the Sky (Bloomsbury YA)

Should you save a world that doesn't want to save you?
Award-winning author Lilliam Rivera explores the haunting story of an alien invasion from the perspective of three Latinx teens.

Pedro, Luna, and Rafa may attend Fairfax High School together in Los Angeles, but they run in separate spheres. Pedro is often told that he's “too much” and seeks refuge from his home life in a local drag bar. Luna is pretending to go along with the popular crowd but is still grieving the unexpected passing of her beloved cousin Tasha. Then there's Rafa, the quiet new kid who is hiding the fact that his family is homeless.

But Pedro, Luna, and Rafa find themselves thrown together when an extraterrestrial visitor lands in their city and takes the form of Luna's cousin Tasha. As the Visitor causes destruction wherever it goes, the three teens struggle to survive and warn others of what's coming--because this Visitor is only the first of many. But who is their true enemy--this alien, or their fellow humans?

Pura Belpré Honor-winning author Lilliam Rivera examines the days before a War of the Worlds-inspired alien invasion in this captivating and chilling new novel.

Lilliam Rivera is an award-winning writer and author of the young adult novels Never Look Back, a Pura Belpré Honor winner, Dealing in Dreams, and The Education of Margot Sanchez, as well as the middle grade Goldie Vance series. Her work has appeared in The Washington Post, The New York Times, and Elle, to name a few. Lilliam grew up in the Bronx and currently lives in Los Angeles.

Praise for We Light Up the Sky:

“A brilliant, powerful, and yet tender and healing story. . . . Lilliam's words filled me with hope and light, even in the darkest times.” —Yamile Saied Méndez, author of the Pura Belpré Award–winning novel FURIA

“This book is for right now, especially for teenagers navigating losses from COVID-19, seeing the injustices of our current systems, feeling the planet change, needing so much more from schools and community, learning to fight for the future they deserve through their grief. The monsters are structural racism and poverty, and the aliens are here to remind us what matters.” —adrienne maree brown, New York Times bestselling author

“We Light Up the Sky is an unflinching look at a Los Angeles that already feels dystopian to marginalized communities. Rivera's expert hand guides science fiction and the contemporary lives of three teens in a race for survival.” —Zoraida Córdova, award-winning author of LABYRINTH LOST

“A triumphant work of sci-fi and heart.” —Kalynn Bayron, bestselling author of CINDERELLA IS DEAD

“A marvelous story about how we are all being flung into the future unprepared, and have to hang together as best we can.” —Kim Stanley Robinson, New York Times bestselling author

“Skillfully crafted and absorbing, We Light Up the Sky is a fresh, complex take on the alien invasion story. Deeply poignant,
and not to be missed.” —Amy Tintera, New York Times bestselling author

“Rivera offers an eerie, immersive page-turner that immediately grips readers in large part because of her skilled characterization that adds emotional richness to an engaging extraterrestrial mystery. . . . An engrossing and exceptionally relevant pre-apocalyptic tale that begs for a sequel.” —Kirkus Reviews, starred review

“Rivera portrays contemporary teenage life with empathy, using a mix of pop culture and social-justice politics to flesh out her characters.” —Booklist

“More than just a riveting alien-invasion story, though, this novel deftly weaves commentary on colonialism, police violence, and racial injustice into the chaos, leaving the main characters to wonder if the only people worth saving may be one another. Early threads of friendship, meanwhile, bind the story, ultimately becoming the trio's salvation. The novel's end chooses hope and a moment of calm over easy human victory and aliens routed.” —BCCB

We Light Up the Sky (Hardcover)