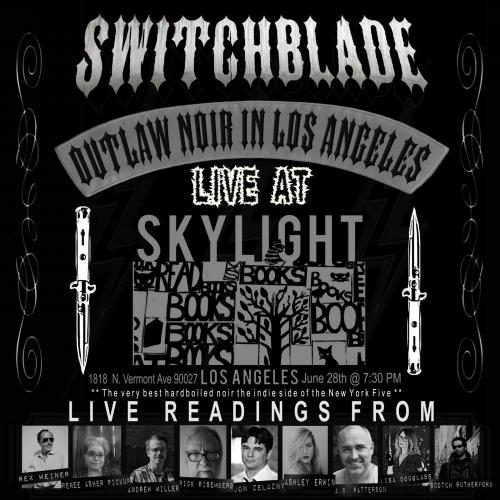 Join the writers of Switchblade Magazine, a quarterly noir fiction digest-sized magazine now going into its 10th issue, for a selection of readings. Readers include:

A.B. Patterson is a Sydney author who tells yarns about corruption and sleaze. He has had a career of investigating crime and corruption. He is a regular contributor to Switchblade and is the author of the two Aussie P.1. novels, Harry's World and Harry's Quest. Follow him at: www.abpatterson.com.au

Ashley Erwin writes, reads, and slings. She carved out a book, A Ballad Concerning Black Betty, couple years back. Two more are in the works and a ton more word grenades available at Ashley-Erwin.com. Give it a holler and it'll show ya the way.

Andrew Miller is a crime novelist, screenwriter and essayist. He lives in Los Angeles.

Jon Zelazny is your typical stay-at-home writer-dad. A graduate of Syracuse University and the U.S. Army Airborne School, he began his Hollywood career with producer Joel Silver, then spent a decade in creative support of acclaimed director Uli Edel. His short stories have appeared in Thuglit, Literary e-clectic, The Binnacle, and Switchblade. He's currently writing a novel about the British ballet.

Rex Weiner is the author of The (Original) Adventures of Ford Fairlane, now available from Rare Bird Books. As a journalist, Rex Weiner's articles have appeared in Vanity Fair, The Paris Review, The New Yorker, LA Weekly, L'Officiel Hommes, and Rolling Stone Italia. He is one of the founding editors of High Times Magazine and a former editor of Swank. Weiner's screencredits include The Adventures of Ford Fairlane, based on his original stories, directed by Renny Harlin and starring Andrew Dice Clay for 20th Century Fox.

Renee Asher Pickup is a mellowed out punk rocker in Southern California. Her fiction has appeared in Out of the Gutter, All Due Respect, and other great publications. She is a co-writer of the novel Black Sails, Disco Inferno, available now from Open Books. She is an acquisitions editor for both Shotgun Honey and Bronzeville Books.

Lisa Douglass is the creator of The Grudge Club, an underground club that focuses on vigilante style justice, and has an album she put out with world-class producer, Mike Chapman, of Blondie fame. Lisa's photography has been featured in Vice's guide to sex, drugs, and rock and roll and she is a long term-contributing photographer for indie magazines like Nylon, Flaunt, and Vice.

Richard Risemberg was dragged to Los Angeles as a child, and has been working there in a number of vernacular occupations since his teens while writing poetry, articles, essays, and fiction, editing online 'zines, sneaking around with a camera trying to steal people's souls, and making a general nuisance of himself, which is his forte. He's survived long enough to become either a respected elder or a tedious old fart, depending on your point of view, and is still at it. It hasn't been easy for any of us.

Scotch Rutherford writes about dark corners between the bright lights. An independent screenwriter and author, his work has appeared in Pulp Modern, Broadswords & Blasters, Shotgun Honey, The Econoclash Review, Pulp Metal Magazine, and All Due Respect. He is also a contributing author in the new clown noir anthology, Greasepaint & 45S from Down & Out books. He is the creator and managing editor of Switchblade.

The Dust Will Answer (Paperback)