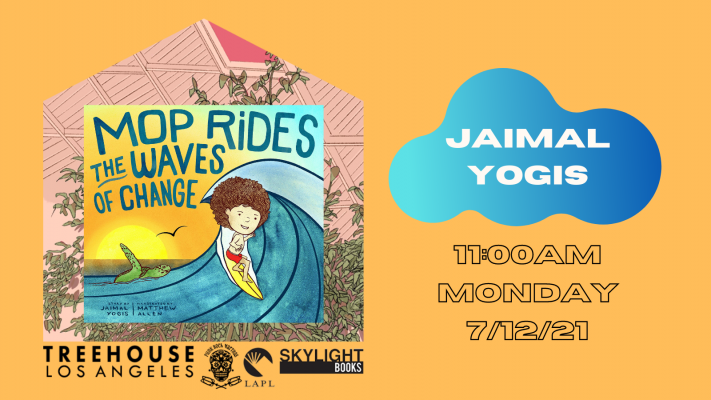 *Join Skylight Treehouse and the LA Public Library virtually on Crowdcast for an interactive event celebrating Jaimal Yogis's picture book, MOP RIDES THE WAVES OF CHANGE! He will be joined by Mop's illustrator, Matthew Allen.

The second in the Mop Rides series! Surfer kid Mop and his friends are back in a quest to save the ocean with mindfulness, surfing, and a band

Mop and his friends are back, this time with a band, The Coconut Heads. Mop is riding high from the lessons he’s learned about riding the waves of life: to breathe, ride the good waves, and let the bad waves go by. But just when he feels like he’s getting the hang of it, he notices a turtle tangled in plastic at the beach. Paddling out to catch a wave, he sees more plastic, and he can’t get rid of his anger. It seems like he’s back to square one. But after an epic wipeout, he has a realization: deep down, under the anger, is love. He loves the ocean, and he wants to help keep it clean.

But how? Let’s just say it involves some party waves and a benefit concert by the Coconut Heads–and it’s not just their parents who show up.

Celebrated San Francisco surfer-journalist-dad Jaimal Yogis teaches 4-8 year-olds timeless beach wisdom with the continuing story of Mop, a sensitive and fun-loving kid who just wants to be in the ocean.

Jaimal Yogis is an award-winning writer of numerous books including Saltwater Buddha, The Fear Project, and All Our Waves Are Water, which have been internationally praised and translated into numerous languages. More recently he has been writing children's books like Mop Rides the Waves of Life, which was named a 2020 Favorite by the Children's Book Review and one of the best sports books for all ages by Book Riot. The next picture book in the series, Mop Rides the Waves of Change, comes out July 2021 from Penguin Random House / Parallax Press. Jaimal's middle-grade graphic novel series, City of Dragons - a collaboration with Vivian Truong - also releases this fall, 2021, from Scholastic. Jaimal's award-winning journalism has appeared in publications like The Washington Post, ESPN Magazine, The Atlantic, and many others. He lives near San Francisco's Ocean Beach with his wife Amy and their three boys.

Illustrator Matthew Allen is a surfer and artist from Southern California. A former Surfer Magazine Art Director, Matthew now spends his days creating art based on his favorite muses. He lives in Costa Mesa, California.

Named a 2020 Favorite of The Children’s Book Review

“Pure gold—especially now. During a time when even the most angelic kids are prone to temper tantrums because of quarantine, Mop is an invaluable teaching tool and an all-around heartwarming read.”
—Alexis Burling, San Francisco Chronicle

“Kindergarten story times will benefit from the focus on emotions and learning mindfulness, with the simple breathing exercises to help children discover how to navigate daily highs and lows.”
—School Library Journal

“Tells how one little boy navigates conflicts at his school by channeling the same techniques he uses when he hangs 10.”
—The New York Times

“The book every kid needs right now to navigate their emotions.”
—Bonnie Tsui, New York Times staff writer and author of Why We Swim

“The steps given here to handle raw emotions should be part of any child’s emotional toolkit.”
—Booklist

“Our minds can be as peaceful or as wild as the seas. Mop is a perfect cool character to introduce children (and overgrown children) to mindfulness so they learn to turn wipeouts into opportunities.”
—Robert Thurman, author of Man of Peace: The Illustrated Biography of the Dalai Lama of Tibet

“The Waves of Life are never easy to ride but these are our waves. They are waves we must ride because they’re a part of us. No one can ride our waves for us. Embrace the process and the ride becomes smoother and sweeter.”
—Gerry Lopez, aka Mr. Pipeline

Mop Rides the Waves of Change: A Mop Rides Story (Emotional Regulation for Kids, Save the Oceans, Surfing for K ids) (Hardcover)

Mop Rides the Waves of Life: A Story of Mindfulness and Surfing (Emotional Regulation for Kids, Mindfulness 1 01 for Kids) (Hardcover)

All Our Waves Are Water: Stumbling Toward Enlightenment and the Perfect Ride (Paperback)

The Fear Project: What Our Most Primal Emotion Taught Me About Survival, Success, Surfing . . . and Love (Hardcover)

Saltwater Buddha: A Surfer's Quest to Find Zen on the Sea (Paperback)