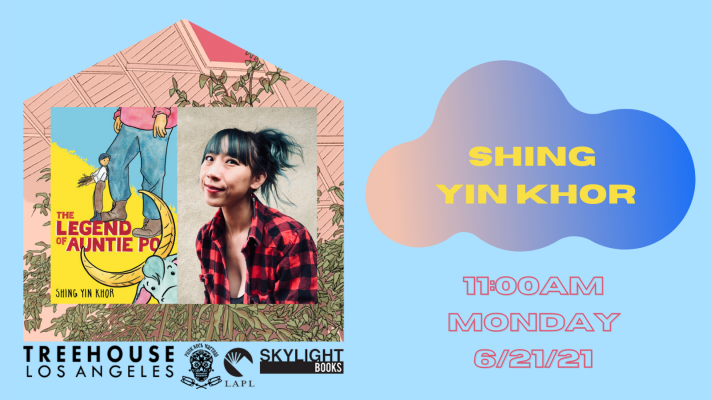 ***Signed bookplates are available! To order a signed copy, just click "signed copy" at checkout and we'll make sure you receive one.

The Legend of Auntie Po (Kokila)

Part historical fiction, part magical realism, and 100 percent adventure. Thirteen-year-old Mei reimagines the myths of Paul Bunyan as starring a Chinese heroine while she works in a Sierra Nevada logging camp in 1885.

Aware of the racial tumult in the years after the passage of the Chinese Exclusion Act, Mei tries to remain blissfully focused on her job, her close friendship with the camp foreman’s daughter, and telling stories about Paul Bunyan–reinvented as Po Pan Yin (Auntie Po), an elderly Chinese matriarch.

Anchoring herself with stories of Auntie Po, Mei navigates the difficulty and politics of lumber camp work and her growing romantic feelings for her friend Bee. The Legend of Auntie Po is about who gets to own a myth, and about immigrant families and communities holding on to rituals and traditions while staking out their own place in America.

Shing Yin Khor is a cartoonist and installation artist exploring the Americana mythos and new human rituals. A Malaysian-Chinese immigrant, and an American citizen since 2011, they are also the author of The American Dream?, a graphic novel about travelling Route 66.

Praise for The Legend of Auntie Po:

“On the surface, this story is the birth of a folktale, but the author explores much deeper topics: grief, family, loyalty, racism, and self-discovery. … Watercolors are beautiful and illustrations are clean and simple, conveying a childlike air while tackling serious subject matter.” —Booklist

“Khor (The American Dream?) straddles myth and harsh realities via stunning digital pencil and hand-painted watercolor art that highlights cornerstones of Chinese culture. Much will resonate with diasporic readers, though any reader will find Mei’s journey cathartic.” —Publishers Weekly

The Legend of Auntie Po (Hardcover)