WE ARE THE BABY-SITTERS CLUB: A Roundtable Talk on the Past, Present, and Future of the BSC 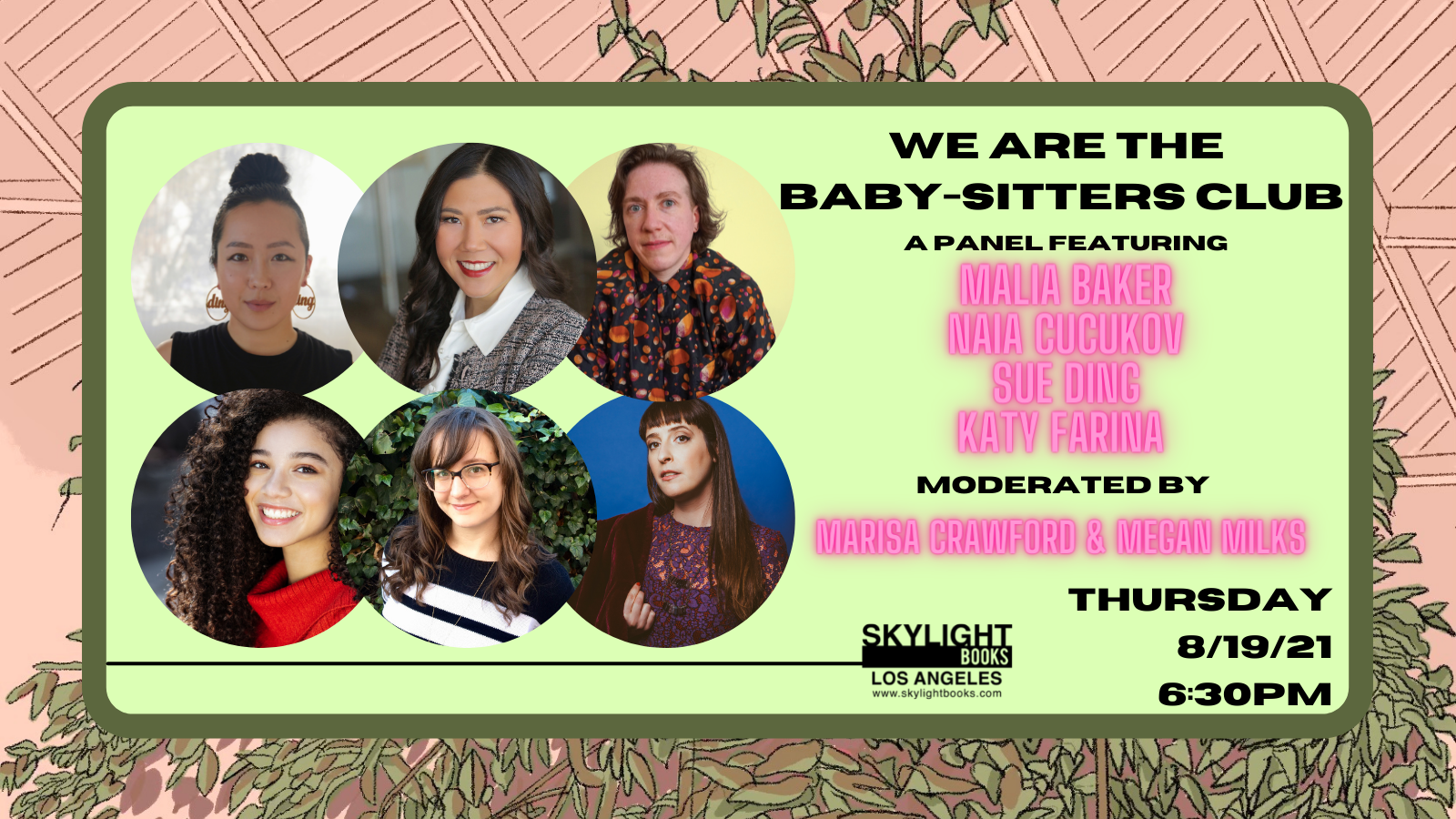 We Are the Baby-Sitters Club: A Roundtable Talk on the Past, Present, and Future of the BSC!

We Are the Babysitters Club: Essays and Artwork from Grown-Up Readers (Chicago Review Press)

A nostalgia-packed, star-studded anthology featuring contributors such as Kristen Arnett, Yumi Sakugawa, and others exploring the lasting impact of the beloved Baby-Sitters Club series.

In 1986, the first-ever meeting of the Baby-Sitters Club was called to order in a messy bedroom strewn with Ring-Dings, scrunchies, and a landline phone. Kristy, Claudia, Stacey, and Mary Anne launched the club that birthed an entire generation of loyal readers. The Baby-Sitters Club series featured a complex cast of characters and touched on an impressive range of issues that were underrepresented at the time: divorce, adoption, childhood illness, class division, and racism, to name a few. In We Are the Baby-sitters Club, writers and a few visual artists from the original BSC generation reflect on the enduring legacy of Ann M. Martin's beloved series, thirty-five years later—celebrating the BSC's profound cultural influence. Contributors include Paperback Crush author Gabrielle Moss, illustrator Siobhán Gallagher, and filmmaker Sue Ding, as well as New York Times bestselling author Kristen Arnett, Lambda Award–finalist Myriam Gurba, Black Girl Nerds founder Jamie Broadnax, and Paris Review contributor Frankie Thomas. The first anthology of its kind from editors Marisa Crawford and Megan Milks, We Are the Baby-Sitters Club will look closely at how Ann M. Martin's series shaped our ideas about gender politics, friendship, fashion and beyond—and what makes the series still a core part of many readers' identities so many years later.

Marisa Crawford's writing on pop culture, art and feminism has appeared in Harper's BAZAAR, The Nation, Hyperallergic, VICE, and elsewhere. She is the author of two collections of poetry, Reversible and The Haunted House, both from Switchback Books. Marisa is the founder of Weird Sister, a website and organization that explores the intersections of feminism, literature, and pop culture.

Megan Milks is the author of Margaret and the Mystery of the Missing Body and Slug and Other Stories. They are a Lammy finalist and the recipient of the 2019 Lotos Foundation Prize in Fiction. Megan’s stories have been published in three anthologies and many journals including Fence, PANK, LIT, and Western Humanities Review; and they are the editor of The &NOW Awards 3: The Best Innovative Writing, 2011-2013; and co-editor of Asexualities: Feminist and Queer Perspectives.

A multi-talented actor, Malia Baker is best known for her role as series regular Mary Anne Spier in Netlix's highly acclaimed remake of The Baby-Sitters Club. Most recently Baker also joined as a series regular on Nickelodean's second season of Are You Afraid of the Dark. Botswana-born & Canadian-raised, Malia began her love of performing at the age of three through musical theatre and dance. She first appeared on screen in ABC's A Million Little Things, CW's The Flash and Hallmark's TV movie, Hope at Christmas.

With over 16 years experience in the entertainment business, Naia Cucukov has worked on a diverse slate of films and television, including Wonder, The BFG, Batman Begins, 300, Limitless and A Dog’s Purpose. On behalf of Walden, Naia most recently executive produced the Emmy Nominated series, The Baby-Sitters Club and the film, A Babysitter’s Guide to Monster Hunting. Naia also starred in the Netflix documentary, The Claudia Kishi Club, that reflected on the impact of Baby-Sitter’s Club character, Claudia Kishi, in the Asian-American community. She is currently producing/executive producing a slate of films and television including Tom Hank’s starring sci-fi film, Finch, with Amblin and Universal Pictures; Rumble, an animated feature from Paramount Animation and the limited series Manhunt at Apple.

Sue Ding is a filmmaker and artist based in Los Angeles. Her work explores identity, storytelling, and visual culture. Sue directs and produces nonfiction projects for platforms including The New York Times and PBS. Her most recent short film, The Claudia Kishi Club, was an official selection at South by Southwest and premiered on Netflix. Sue also leads the XR/emerging media program at the Los Angeles Asian Pacific Film Festival, and consults on interactive, immersive, and multiplatform projects. She writes and lectures on documentary, participatory, and new media storytelling. She is an alum of MIT’s Open Documentary Lab and a Senior Civic Media Fellow at USC’s Annenberg School for Communication and Journalism.

Katy Farina is the creator of the New York Times bestselling graphic novel adaptations of the Baby-sitters Little Sister series by Ann M. Martin. She has painted backgrounds for She-Ra and the Princesses of Power at DreamWorks TV and has also done work for BOOM! Studios, Oni Press, and Z2 Comics. She lives in Los Angeles. Visit her online at katyfarina.com.

“I picked up this collection because I was obsessed with the BSC as a child. I couldn't put it down because, as an adult, I am obsessed with the complexities of gender, friendship, race, and power. This anthology helped me connect my childhood and adult interests in a way that few things have.”—Ann Friedman, co-author of Big Friendship: How We Keep Each Other Close

“The Baby-Sitters Club taught a whole generation of American girls the importance of having a crew. This book is a reunion, a homecoming, an opportunity to connect with all the folks you grew up with but never even knew, a chance to really understand why these seven girls have stayed with us and shaped us for so many years. More than three decades after we joined them for the adventure of a lifetime, We Are the Baby-Sitters Club proves that the best friendships allow us to reminisce, to reflect, and to grow.”—Brittney Cooper, author of Eloquent Rage

"Reading this anthology was like having a big, boisterous, long-awaited conversation with friends in which we shared our great love of the series, and filled in the parts of us it failed to mirror. It was a joy, a relief, and a homecoming that I hadn't known I needed. More than a book about a series of books, it is an ode to the child readers we were, and the ways we have learned to name the experiences we couldn't find written." —Melissa Febos, author of Abandon Me & Girlhood

“Turns out there were a whole lot of us obsessed with The Baby-Sitter’s Club! We Are The Baby-Sitter’s Club is the ultimate companion guide for a generation of devout superfans. This book revisits the beloved series through grown-up eyes – but never loses the magic we all felt the moment we cracked open a fresh new book. BSC forever!” – Lucia Aniello, Director & Executive Producer, The Baby-Sitters Club Netflix series

We Are the Baby-Sitters Club: Essays and Artwork from Grown-Up Readers (Paperback)