WEST COAST LAUNCH: MIEKO KAWAKAMI presents ALL THE LOVERS IN THE NIGHT with RUTH OZEKI 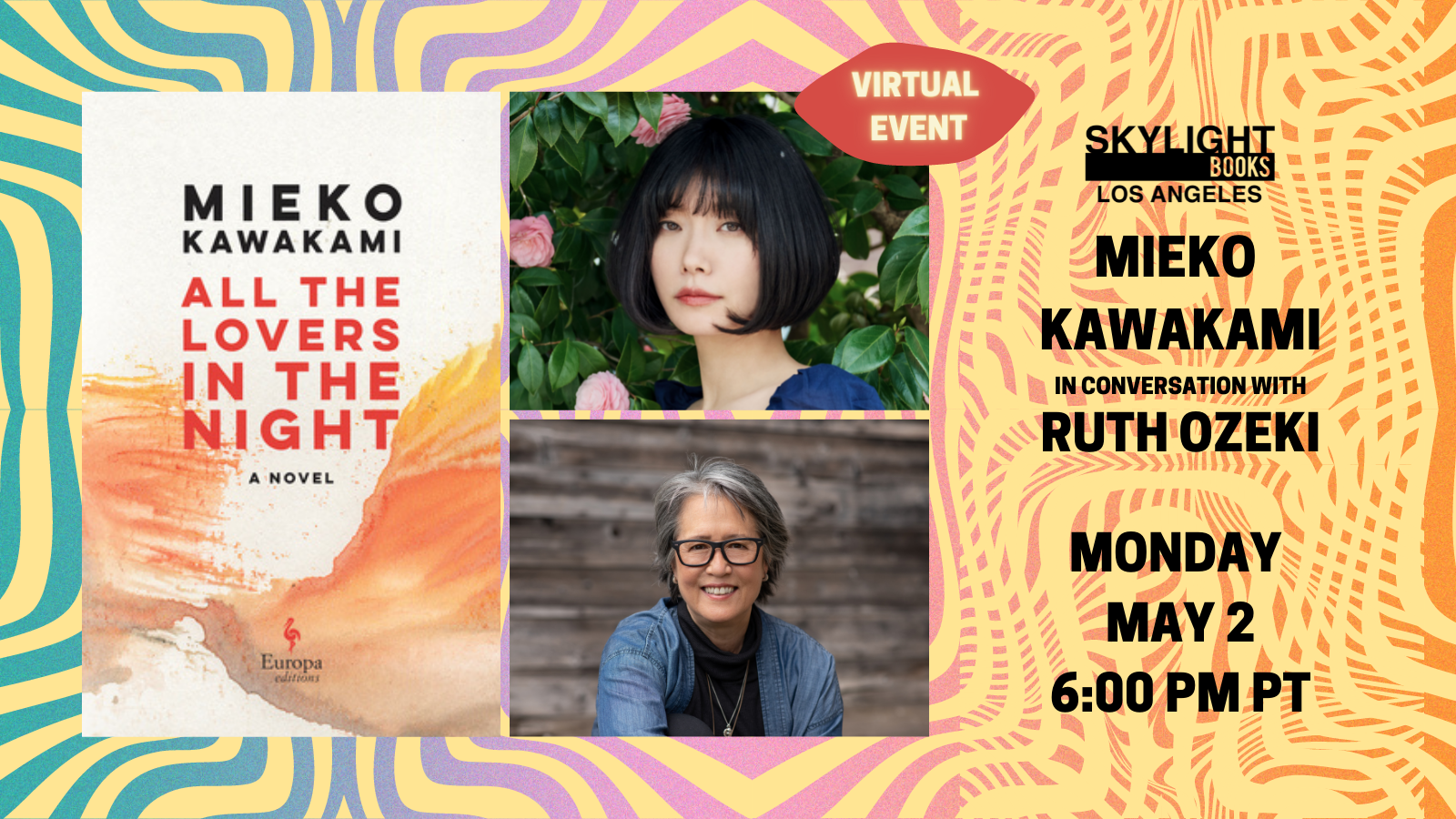 Join us on May 2nd for the virtual west coast launch event of All the Lovers in the Night—the new novel from Mieko Kawakami, author of Breasts and Eggs and Heaven—hosted by Skylight Books, Book Passage, Diesel, Green Apple Books, and Bookshop Santa Cruz.

*A limited number of signed bookplates are available!*

All the Lovers in the Night (Europa Editions)

Bestselling author of Breasts and Eggs Mieko Kawakami invites readers back into her immediately recognizable fictional world with this new, extraordinary novel and demonstrates yet again why she is one of today's most uncategorizable, insightful, and talented novelists.

Fuyuko Irie is a freelance copy editor in her mid-thirties. Working and living alone in a city where it is not easy to form new relationships, she has little regular contact with anyone other than her editor, Hijiri, a woman of the same age but with a very different disposition. When Fuyuko stops one day on a Tokyo street and notices her reflection in a storefront window, what she sees is a drab, awkward, and spiritless woman who has lacked the strength to change her life and decides to do something about it.

As the long overdue change occurs, however, painful episodes from Fuyuko's past surface and her behavior slips further and further beyond the pale. All the Lovers in the Night is acute and insightful, entertaining and engaging; it will make readers laugh, and it will make them cry, but it will also remind them, as only the best books do, that sometimes the pain is worth it.

Mieko Kawakami is the author of the internationally best-selling novel Breasts and Eggs, a New York Times Notable Book of the Year and one of TIME’s Best 10 Books of 2020; and the highly acclaimed Heaven, her second novel to be translated and published in English, which Oprah Daily described as written “with jagged, visceral beauty.” Born in Osaka, Japan, Kawakami made her literary debut as a poet in 2006, and in 2007 published her first novella, My Ego, My Teeth, and the World. Known for their poetic qualities, their insights into the female body, and their preoccupation with ethics and modern society, her books have been translated into over twenty languages. Kawakami’s literary awards include the Akutagawa Prize, the Tanizaki Prize, and the Murasaki Shikibu Prize. She lives in Tokyo, Japan.

Ruth Ozeki is a novelist, filmmaker, and Zen Buddhist priest. She is the best-selling author of four novels: The Book of Form and Emptiness, longlisted for the UK Women’s Prize for Fiction; My Year of Meats; All Over Creation; and A Tale for the Time Being, winner of the LA Times Book Prize and finalist for the 2013 Booker Prize and the National Book Critics' Circle Award. Her nonfiction work includes a memoir, The Face: A Time Code, and the documentary film, Halving the Bones. A longtime Buddhist practitioner, Ruth is affiliated with the Brooklyn Zen Center and the Everyday Zen Foun­dation. She is the Grace Jarcho Ross 1933 Professor of Humanities at Smith College.

Praise for All the Lovers in the Night -

"In the skilled hands of Bett and Boyd, Kawakami's prose is instantly recognizable--immediate, incisive, and unfailingly honest."--Katie Kitamura, Entertainment Weekly (A Most Anticipated Book of 2022)

All the Lovers in the Night (Hardcover)