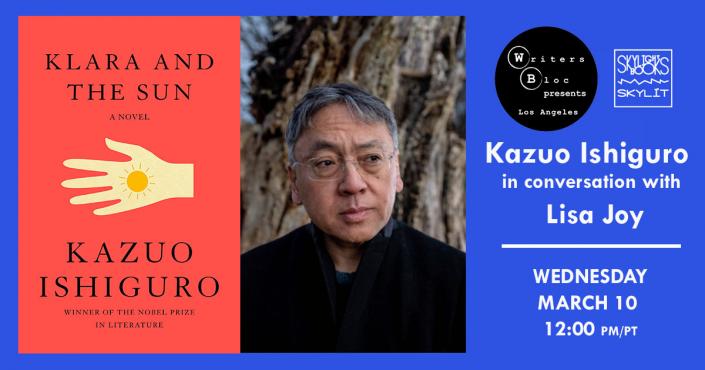 *Please note: This event will take place virtually, hosted by Writers Bloc Presents and the Skirball Center. Purchase of a ticket includes event access and a copy of KLARA AND THE SUN. The first 250 customers will also receive a signed bookplate.

Get your tickets here.

If you would like your book shipped to you, please select the shipping add-on at checkout.

Klara and the Sun is a magnificent new novel from the Nobel laureate Kazuo Ishiguro–author of Never Let Me Go and the Booker Prize-winning The Remains of the Day.

Klara and the Sun, the first novel by Kazuo Ishiguro since he was awarded the Nobel Prize in Literature, tells the story of Klara, an Artificial Friend with outstanding observational qualities, who, from her place in the store, watches carefully the behavior of those who come in to browse, and of those who pass on the street outside. She remains hopeful that a customer will soon choose her.

Klara and the Sun is a thrilling book that offers a look at our changing world through the eyes of an unforgettable narrator, and one that explores the fundamental question: what does it mean to love?

In its award citation in 2017, the Nobel committee described Ishiguro’s books as “novels of great emotional force” and said he has “uncovered the abyss beneath our illusory sense of connection with the world.”

KAZUO ISHIGURO was born in Nagasaki, Japan, in 1954 and moved to Britain at the age of five. His eight previous works of fiction have earned him many honors around the world, including the Nobel Prize in Literature and the Booker Prize. His work has been translated into over fifty languages, and The Remains of the Day and Never Let Me Go, both made into acclaimed films, have each sold more than 2 million copies. He was given a knighthood in 2018 for Services to Literature. He also holds the decorations of Chevalier de l’Ordre des Arts et des Lettres from France and the Order of the Rising Sun, Gold and Silver Star from Japan.

LISA JOY is an American screenwriter, director and producer. She is best known as the co-creator, writer, director, and executive producer of the HBO science-fiction drama series Westworld (2016–present). For her work on the series, she received multiple Primetime Emmy Award nominations. Joy's other work includes the ABC comedy series Pushing Daisies (2007–2009) and the USA Network crime drama series Burn Notice (2009–2011). Joy recently completed her feature directorial debut, Reminiscence, starring Hugh Jackman and Rebecca Ferguson, for Warner Bros. Pictures. Joy is the screenwriter, director, and producer. The film will hit theaters and HBO Max on Sept. 3, 2021.

The Remains of the Day (Vintage International) (Paperback)

An Artist of the Floating World (Vintage International) (Paperback)

When We Were Orphans: A Novel (Vintage International) (Paperback)