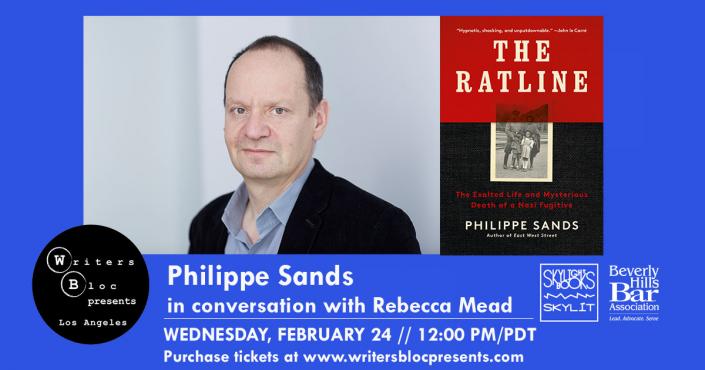 *Please note: this event will take place on Zoom with Eventbrite registration, hosted by Writers Bloc Presents and the Beverly Hills Bar Association. Philippe Sands will be in conversation with The New Yorker's Rebecca Mead.

London-based international attorney Philippe Sands, who specializes in human rights law, braids his profoundly  personal connection to the infinite evil of the Nazi regime in WWII with an investigation into one of the more heinous figures in the Reich: Baron Otto Von Wachter.

In his new book, The Ratline: The Exalted Life and Mysterious Death of a Nazi Fugitive  (The Ratline refers to the escape route favored by Nazi war criminals from Europe to safe havens in Argentina), Sands pulls back the curtain on Otto Wachter who was responsible for the mass murder of hundreds of thousands of Jews and Poles. This pursuit is personal to Sands:  his family was all but destroyed by the Nazi's, many under Wachter's aegis. We follow Wachter's rapid rise from Vienna, to Krakow, to Galicia, reporting directly to Himmler.  Fleeing from his prosecutors at war's end, Wachter spends several  years on the lam, escaping justice at Nuremberg. Who murdered Wachter in his secret hideout in post-war Rome, a city swarming with spies? Jews? Soviets? Americans? Brits? Sands packs The Ratline with shocking and stunning revelations, including Wachter's letters, folksy diary entries from Wachter's rapaciously ambitious wife, and protestations from Wachter's genial and earnest son, who simply cannot accept that his father was guilty of the crimes for which he was accused.

Like Philippe Sands, Rebecca Mead often writes about the intersection of history and modern life. She's been a staff writer at The New Yorker for over 20 years, and is the recipient of a 2020 Guggenheim Fellowship. Her most recent book, My Life in Middlemarch, was a New York Times bestseller.

The Ratline: The Exalted Life and Mysterious Death of a Nazi Fugitive (Hardcover)

East West Street: On the Origins of "Genocide" and "Crimes Against Humanity" (Paperback)

My Life in Middlemarch: A Memoir (Paperback)

One Perfect Day: The Selling of the American Wedding (Paperback)

How the Vote Was Won: Woman Suffrage in the Western United States, 1868-1914 (Paperback)