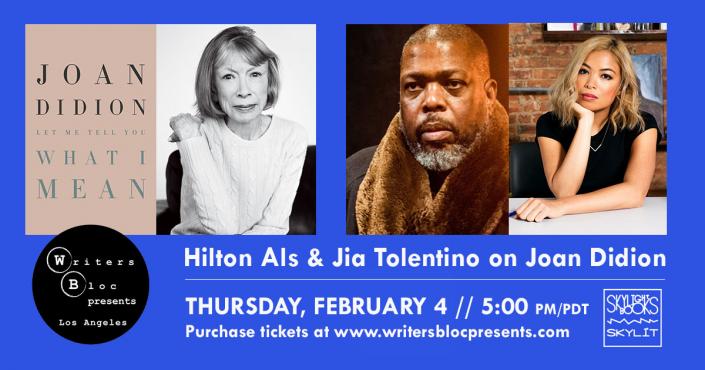 Let Me Tell You What I Mean (Knopf)

From one of our most iconic and influential writers: a timeless collection of mostly early pieces that reveal what would become Joan Didion's subjects, including the press, politics, California robber barons, women, and her own self-doubt.

These twelve pieces from 1968 to 2000, never before gathered together, offer an illuminating glimpse into the mind and process of a legendary figure. They showcase Joan Didion's incisive reporting, her empathetic gaze, and her role as an articulate witness to the most stubborn and intractable truths of our time ( The New York Times Book Review).

Here, Didion touches on topics ranging from newspapers (the problem is not so much whether one trusts the news as to whether one finds it), to the fantasy of San Simeon, to not getting into Stanford. In "Why I Write", Didion ponders the act of writing: I write entirely to find out what I'm thinking, what I'm looking at, what I see and what it means. From her admiration for Hemingway's sentences to her acknowledgment that Martha Stewart's story is one that has historically encouraged women in this country, even as it has threatened men, these essays are acutely and brilliantly observed. Each piece is classic Didion: incisive, bemused, and stunningly prescient.

Praise for Let Me Tell You What I Mean:

"Didion's remarkable, five decades-long career as a journalist, essayist, novelist, and screen writer has earned her a prominent place in the American literary canon, and the twelve early pieces collected here underscore her singularity. Her musings--whether contemplating "pretty" Nancy Reagan living out her "middle-class American woman's daydream circa 1948" or the power of Ernest Hemingway's pen--are all unmistakably Didionesque. There will never be another quite like her." -- O Magazine

"[A] dozen arresting, mind-tuning, previously uncollected essays in this exhilarating and instructive gathering spanning several decades . . . [Writing is] a voyage of discovery for Didion, conducted via meticulous observation and assiduous questioning of what she thinks and how her investigations make her feel. We see this at work in her responses to a reunion of the WWII 101st Airborne Division during the Vietnam War and a photo shoot with Nancy Reagan, and in profiles of Robert Mapplethorpe and Martha Stewart. Didion is both porous and steely, self-deprecating and in command. With a perceptive foreword by Hilton Als, who discerns the "uncanny" in Didion's exacting work, this an illuminating and inspiring addition to the influential Didion canon." --Donna Seaman, Booklist

"Unquestionably, Joan Didion has been the voice of a generation . . . But she has also been the voice of those who've followed--you can hear her concision; her taste in the spare, shimmery detail; her lean, muscular sentences; and her dogged questioning of perceived truths . . . Didion is the model and exemplar, but she's also just the best writer there is at melding the personal and the political, and bundling all the lit match-sticks of modern life into journalistic form." --Christopher Bollen, Interview Magazine (Ladies and Gentlemen, the Great Joan Didion)

"What you notice in Didion's nonfiction is how her clarity becomes even sharper when disquiet rattles the cage of the quotidian . . . What Didion sought was naturalness of expression as controlled by a true understanding of one's craft, the better to describe the ineffable, the uncanny in the everyday." --Hilton Als, from the foreword of Let Me Tell You What I Mean

"A slender, highly satisfying collection . . . In an appreciative introduction, New Yorker theater critic Hilton Als praises Didion as "a carver of words in the granite of the specific." Stylistic precision and the "energy and shimmer" of her prose are fully evident in this volume of previously uncollected pieces . . . All reveal the author's shrewd, acerbic critical eye . . . Didion's rejection from Stanford elicited an essay about college as consumption, and her skewering of consumption and artifice recur as themes--for example, in her observation of the ways women stage themselves for portrait photographs. Several particularly revealing essays focus on writing." --Kirkus

"This wide-ranging essay collection from Didion showcases her strengths as a short form writer . . . The pieces trace Didion's development as an essayist and offer glimpses of late-20th-century social history . . . As always, the writing is captivating . . . Didion fans new and old will be delighted." -- Publishers Weekly

Joan Didion is the author of five novels, ten books of nonfiction, and a play. Her book, The Year of Magical Thinking, won the National Book Award in 2005. She lives in New York.

Jia Tolentino is a young and terrific writer, who is a staff writer for The New Yorker. She is the author of the acclaimed essay collection, Trick Mirror: Reflections on Self Delusion, which hit every 10-best list from NPR to the New York Times, to Good Housekeeping. Like Didion, Jia thinks about cultural phenomena that confound us and define us, and sometimes wholly absorb us. Zadie Smith suggests that Jia could be the Joan Didion of our time.

Hilton Als, theater critic, culture critic, and all-around man about town for The New Yorker, has won prize after prize, from the Pulitzer to a Guggenheim, among others. His book, White Girls, was nominated for a National Book Critics Circle Award, and winner of the Lambda Literary Prize for nonfiction. He has cited Joan Didion as a major influence on his work. He’s written the foreword to Let Me Tell You What I Mean, and neatly sums up her work when he considers that “her famous clarity becomes even sharper when disquiet rattles the cage of the quotidian.”

Let Me Tell You What I Mean (Hardcover)

South and West: From a Notebook (Vintage International) (Paperback)

Play It As It Lays: A Novel (FSG Classics) (Paperback)

Where I Was From (Vintage International) (Paperback)