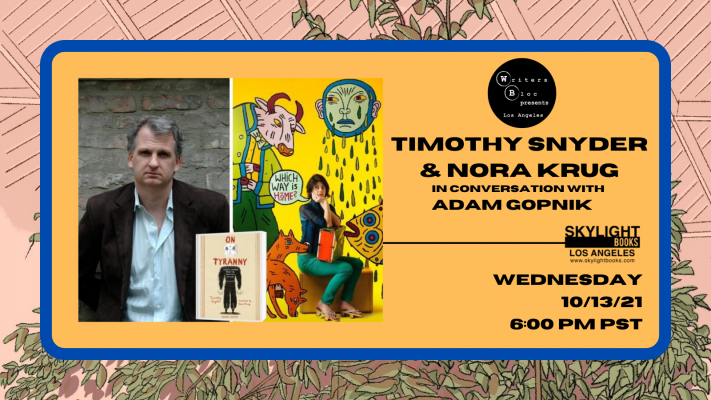 The video of the livestream will be posted on our Youtube Channel after the event.

After you register, we will follow up with email instructions on how to redeem your ticket and access the event. Please read your Eventbrite email confirmation carefully.

Support authors and local bookstores by purchasing a copy of On Tyranny Graphic Edition: Twenty Lessons from the Twentieth Century.

Of the countless books that emerged from the Trump years, one of the great standouts is Timothy Snyder’s slim pocketbook, On Tyranny: Twenty Lessons from the Twentieth Century. Snyder and artist Nora Krug have made a graphic illustrated edition, to amplify the urgent message from the earlier edition.

On Tyranny’s slight size is deceptive in its power: Snyder’s handbook offers us 20 powerful steps to preserve our freedom, to activate for change, and to look menacing threats to our democracy squarely in the eye as individuals with agency, and power to participate in social resistance. On Tyranny has been cited–and cherished–by countless journalists and thought leaders as diverse as Hillary Clinton, Rachel Maddow, and Ken Burns.

When this book originally emerged in 2017, many worried that authoritarianism was at our doorstep, despite recent and terrible lessons from the 20th century. It was meant to frighten and awaken us to the terrible truths unleashed in the 20th century.

Timothy Snyder, Professor of History at Yale, is an expert on 20th Century European history, and has written extensively on pre-war Europe, and the lessons we thought we learned and need to heed from World War II. He has warned us that in the 1920’s and 30’s, many European democracies didn’t believe that their countries could or would ever succumb to Nazism, Fascism, or other forms of authoritarianism. The rest is history. Very recent history.

In conversation with Adam Gopnik. Adam Gopnik is a contributor to The New Yorker, as well as an author, raconteur, playwright, librettist, and lyricist. His books include Paris to the Moon, At the Stranger’s Gate, and A Thousand Small Sanities. He writes extensively on art and music, as well as on politics and cultural movements. He is without a doubt one of our favorite writers in The New Yorker, and elsewhere.