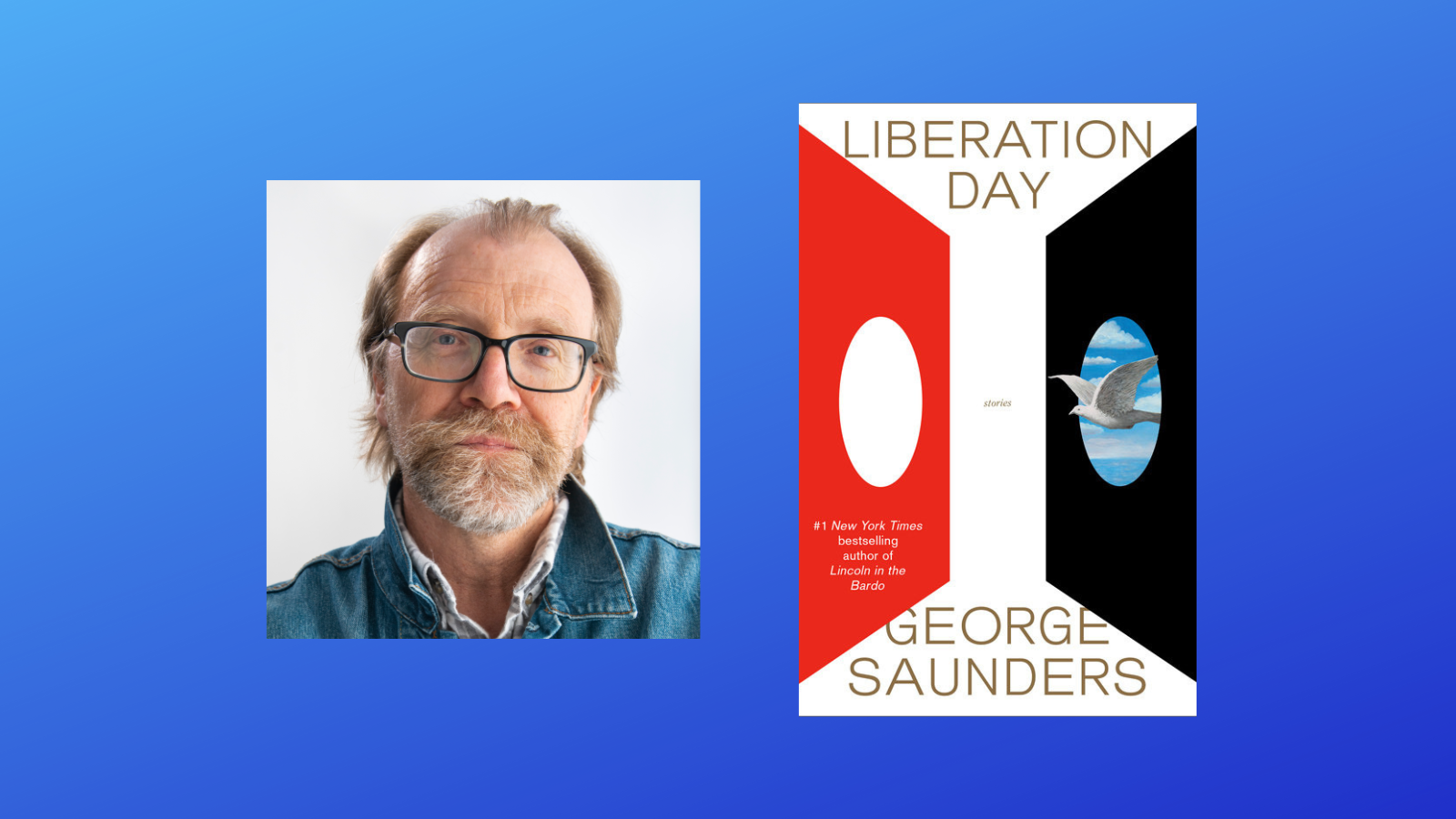 GET TICKETS HERE! Each ticket includes a signed copy of Liberation Day.

The “best short-story writer in English” (Time) is back with a masterful collection that explores ideas of power, ethics, and justice and cuts to the very heart of what it means to live in community with our fellow humans. With his trademark prose—wickedly funny, unsentimental, and exquisitely tuned—Saunders continues to challenge and surprise: Here is a collection of prismatic, resonant stories that encompass joy and despair, oppression and revolution, bizarre fantasy and brutal reality.

“Love Letter” is a tender missive from grandfather to grandson, in the midst of a dystopian political situation in the (not too distant, all too believable) future, that reminds us of our obligations to our ideals, ourselves, and one another. “Ghoul” is set in a Hell-themed section of an underground amusement park in Colorado and follows the exploits of a lonely, morally complex character named Brian, who comes to question everything he takes for granted about his reality. In “Mother’s Day,” two women who loved the same man come to an existential reckoning in the middle of a hailstorm. In “Elliott Spencer,” our eighty-nine-year-old protagonist finds himself brainwashed, his memory “scraped”—a victim of a scheme in which poor, vulnerable people are reprogrammed and deployed as political protesters. And “My House”—in a mere seven pages—comes to terms with the haunting nature of unfulfilled dreams and the inevitability of decay.

Together, these nine subversive, profound, and essential stories coalesce into a case for viewing the world with the same generosity and clear-eyed attention Saunders does, even in the most absurd of circumstances.

George Saunders is the #1 New York Times bestselling author of eleven books, including A Swim in a Pond in the Rain; Lincoln in the Bardo, which won the Booker Prize; Congratulations, by the Way; Tenth of December, a finalist for the National Book Award and winner of the inaugural Folio Award; The Braindead Megaphone; and the critically acclaimed collections CivilWarLand in Bad Decline, Pastoralia, and In Persuasion Nation. He teaches in the creative writing program at Syracuse University.

Judd Apatow is one of the most prolific comedic minds in the industry—having directed, produced, and written many of the biggest comedy films and hit TV shows of the last two decades. Apatow's most recent feature is the Netflix comedy, The Bubble, which he directed, produced, and co-wrote with Pam Brady.  Apatow also co-directed, with Michael Bonfiglio, and produced the Emmy®-award-winning HBO Documentary Films two-part documentary, George Carlin’s American Dream, and produced Universal’s romantic comedy, Bros, starring, and co-written by, Billy Eichner, Apatow also recently authored the New York Times best-seller, Sicker in the Head, a follow-up to his New York Times best-seller Sick in the Head. Previous director credits include The 40-Year-Old Virgin, Knocked Up, Funny People, This is 40, Trainwreck and The King of Staten Island. He produced the Academy Award®-nominated films The Big Sick, Bridesmaids as well as Superbad. In television, he was the executive producer of Freaks and Geeks, Girls, Crashing, and Love.

“One of our most inventive purveyors of the form returns with pitch-perfect, genre-bending stories that stare into the abyss of our national character . . . An exquisite work from a writer whose reach is galactic.”—Oprah Daily

“Saunders has revealed himself to be nothing less than an American Gogol: funny, pointed, full of nuance, and always writing with a moral heart. This, his first book of short fiction in nearly a decade, only cements the validity of such a point of view. The nine pieces here are smart and funny, speculative yet at the same time written on a human scale, narratives full of love and loss and longing and the necessity of trying to connect.”—Kirkus Reviews (starred review)

“Saunders’s vision of diabolically intrusive tyranny undermining democracy possesses the keen absurdity of Kurt Vonnegut, while his more subtle stories align with the gothic edge of Shirley Jackson. . . . Each of these flawless fables inspires reflection on the fragility of freedom and the valor of the human spirit.”—Booklist (starred review)