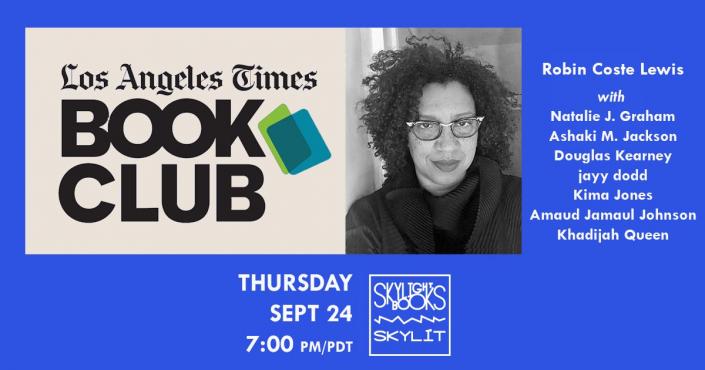 Robin Coste Lewis is the Los Angeles poet laureate, author of “Voyage of the Sable Venus” and a writer in residence at USC. She’ll talk about her tenure as the city’s reigning laureate and life as a poet.

She joins a lineup of poet performers sharing their experiences in verse. Among them:

Natalie J. Graham is the author of “Begin with a Failed Body,” her debut poetry collection. She is a Cave Canem Fellow and chair of the African American Studies Department at Cal State Fullerton.

Ashaki M. Jackson is the author of two chapter-length collections, including “Language Lesson.” She is a social psychologist and program evaluator in Los Angeles.

Douglas Kearney has published six books and teaches Creative Writing at the University of Minnesota–Twin Cities. Raised in Altadena, Kearney’s newest book, “Sho,” will be published in 2021.

jayy dodd is the author of “Mannish Tongues” & “The Black Condition ft. Narcissus.” Born in Los Angeles and now based in Portland, her film & performance work has been installed & screened across the country from classrooms to museums.

Kima Jones is a Los Angeles poet and founder of Jack Jones Literary Arts. She is co-host of the event with the L.A. Times Book Club.

Amaud Jamaul Johnson is the author of three poetry collections, “Red Summer,” “Darktown Follies” and “Imperial Liquor.” Born and raised in Compton, he is former Stegner Fellow at Stanford University and is now an English professor at the University of Wisconsin-Madison, where he directs the MFA Program in Creative Writing.

Khadijah Queen is the author of six books, including “I'm So Fine: A List of Famous Men & What I Had On.” Her latest book, “Anodyne,” was published in August by Tin House.

Voyage of the Sable Venus: and Other Poems (Paperback)

Someone Took They Tongues (Paperback)

Mess and Mess and (Paperback)

I'm So Fine: A List of Famous Men & What I Had on (Paperback)