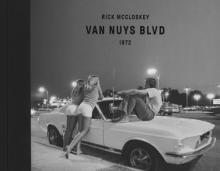 Wednesday night was «Cruise Night» in the San Fernando Valley, a suburb of Los Angeles. The stretch on Van Nuys Boulevard between Ventura Boulevard on the southern end, and well past Sherman Way to the north, teemed with kids and cars from all over Southern California on Wednesday nights. It was a terrific place to both see and be seen, and to show off your ride as well.

Gas was cheap, times were great, and the boulevard hummed with life during the evenings. Even the «draft» during the Vietnam War did not dampen the street scene. By 1972, the year Rick McCloskey went to Van Nuys to shoot his series of photographs, the culture on the boulevard had become an amalgamation of divergent lifestyles, automobiles – used and new – and some very different «looks» and styles. There were «tribes» of van kids – surfers mostly – low-riders, muscle cars, street racers, Volkswagen owners, and many more, and of course, thousands of young people. The idea of «retro» had arrived as well, with some young people emulating the look and style of the 1950s. Of course, there were individuals who had to be there for work. In making these images, Rick McCloskey set about portraying the young people, their cars, and the iconic background settings.

Today, young people no longer have anything similar to the past boulevard gathering places, where so many people can enjoy «just being there» together. Akin to starlight still trickling in from a long vanished world, these photographic images are what we have left.

with a text by the artist